Film festival brings movies from around the world. 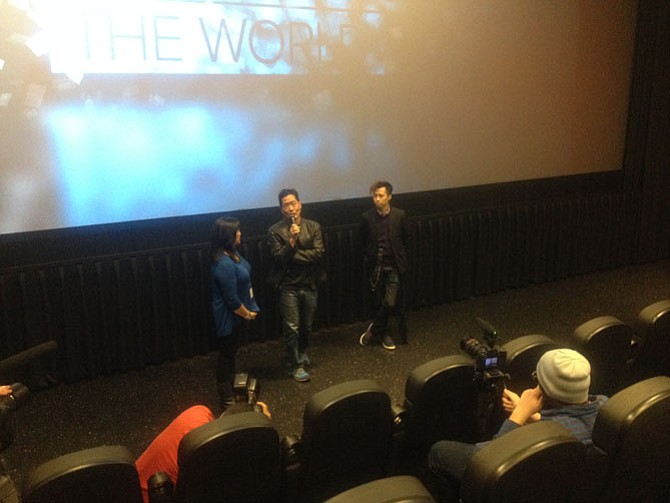 For some of the films at the Washington West Film Festival, movie directors or cast will be available to discuss the film and answer questions. In 2014, director Andrew Loo and actor Carl Li held a question and answer session at Reston Town Center's Bow Tie Cinemas after showing the film “Revenge of the Green Dragons,” produced by Martin Scorsese. Photo by Ryan Dunn.

The Washington West Film Festival intends to repeat its history of great cinema screenings at its 5th annual festival. From Oct. 21-27, 56 films from around the world will be shown at venues including the Reston Bow Tie Cinemas, Wolf Trap Foundation For The Performing Arts, National Press Club, George Mason University, the Lorton Workhouse Arts Center, the Angelika Film Center and more.

The film festival invites filmmakers, film lovers, industry professionals, and media alike to experience a breathtaking view of artistic cinema. “What is unique about Washington West Film Festival is that we believe a story can change the world,” said Brad Russell, founder and president of Washington West Film Festival. One feature of this year’s festival is the celebration of the iconic 1980s film “Back To The Future.”

“Beyond celebrating the iconic movie experience the trilogy has been for millions of people, ‘Back to the Future’ represents for us the idea of dreaming what could be, and the potential personal impact every individual can have on the future,” said Russell, who was born and raised in the northern Virginia area. “Washington West is entirely about inspiring innovative ways to change our future and our world.”

DeLorean Time Machines, raffles/auctions, and more will be a part of the celebration. Wednesday, Oct. 21, Washington West will host a pre-fest marathon screening of the “Back to the Future” trilogy at Reston Town Center's Bow Tie Cinemas. The Fairfax County Board of Supervisors passed a resolution to ceremoniously change the name of Reston, Virginia to "Hill Valley" from Oct. 21–25. The name change is in honor of the Washington West International Film Festival's tribute to the 30th anniversary of the film “Back to the Future.” The name change takes effect Wednesday, Oct. 21, 2015; the date main characters Doc and Marty, played by Christopher Lloyd and Michael J. Fox, took the DeLorean time machine into the future.

HEADQUARTERED IN RESTON, the Washington West Film Festival, with the support of Universal Pictures, will host a Red Carpet screening of “Back to the Future” Sunday, Oct. 25. Actor Christopher Lloyd, movie trilogy co-writer and co-producer Bob Gale, and cast members Claudia Wells and James Tolkan will be in attendance at the red carpet and screening. Other special guests are expected to attend.

As part of their unique model, Washington West will give 100 percent of box office net proceeds from the #GiveBackToTheFuture red carpet screening to the Michael J. Fox Foundation for Parkinson's Research. "The Michael J. Fox Foundation remains grateful to the Washington West Film Festival for their support and for their eagerness to join in our efforts to help speed a cure for Parkinson's disease," says Associate Director of Team Fox, Liz Diemer.

"2015 is a big year for ‘Back to the Future’ fans, and it has been both inspiring and humbling to see the many ways that this community has transformed their many and varied celebrations into opportunities to make a difference," continues Diemer.

When a Reston resident attends any film screening during the first four days of the festival (Oct. 21-24), they will have the opportunity to receive free admission to any one of three "Local Spotlight" films on Sunday, Oct. 25, at Bow Tie Cinemas. Admission on Sunday, Oct. 25, will be on a first-come, first-serve basis, and will be guaranteed for the first 15 residents (with proof of previous ticket purchase and proof of Reston address). Major sponsors for the festival include Canvas, Leidos, Viget and Yorktel. Boeing is the Official Presenting Sponsor of the Washington West Film Festival.

THE AWARDS NIGHT film, ceremony and after-party will be on Saturday, Oct. 24, at 7 p.m. at Bow Tie Cinemas in Reston Town Center. The awards film is the anticipated "Honorable Mention" selection made by Washington West leadership, a captivating and inspiring story that embodies the core philosophy of the festival. For film selections, special events, and ticket sales, visit www.wwfilmfest.com/films.