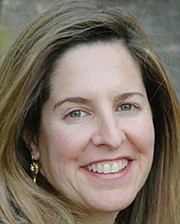 Education including degrees and institutions:

The American University, B.A. in History and International Studies.

U.C.L.A., M.F.A. in Playwriting from the School of Theater, Film & Television.

Occupation and relevant experience: Vice Mayor Allison Silberberg is a writer with over 25 years of community leadership and public service. With an expertise in grant making, nonprofit sector, and civic engagement, she is the author of "Visionaries In Our Midst: Ordinary People who are Changing our World," which profiles individuals who are making a difference. She is the co-author a forthcoming book about ensuring that women are included in medical research, clinical trials, and drug testing. She is also the commissioned author of a memoir for a philanthropic family about leading a meaningful life. Her writing has appeared on PBS.org, and her columns have appeared in The Washington Post and Dallas Morning News. She worked on Capitol Hill for Senator Lloyd Bentsen of Texas.

I am honored by all the endorsements, but I will list four.

All of us are the temporary stewards of this national treasure called Alexandria. The Honorable Patsy Ticer has called me, "A Voice of Reason." The question is, What kind of a community do we want to live in, whether it is in Old Town or the West End? We are a city of great neighborhoods. Throughout the city, I believe we must pursue thoughtful, appropriate development that fits in, is to scale, and protects our neighborhoods and quality of life. We must preserve all the Historic Districts of our beloved city and must safeguard them for generations to come. Historic preservation is a core value of our community, and it needs to be a core value of our elected leadership. I will never sell City Hall.

What distinguishes you from your opponent(s) and why should voters choose you? Restoring the public trust is critical. We need more transparency and fewer executive sessions. The BRAC building is an outcome of executive sessions. BRAC is off the tax rolls and will cost our city over $60 million over the next 20 years alone, and there was no vote, no accountability. It is an economic disaster for our city. Allison returns campaign contributions from people she knows have development proposals before the Council. Mr. Euille accepted over $100,000 in contributions from developers with business before the Council. Allison's campaign finance reports are 100% in compliance with State law. Mr. Euille's reports averaged under 15%. It is time for change.

I envision a city where the citizens know that their elected leadership listens first and then takes action. When I am mayor, when citizens take the time to come to City HalI, they will be heard. I am an active listener and pay attention to the public's concerns. I listen to all sides before making up my mind and seek compromise where possible.

As Vice Mayor, I have hosted a monthly coffee called "Council on Your Corner," where citizens from across the city have joined me to share their thoughts, concerns and ideas. I will continue these monthly coffees as mayor. I am proud of my reputation as someone who respects the voices of our citizens. We must rebuild the people's trust.