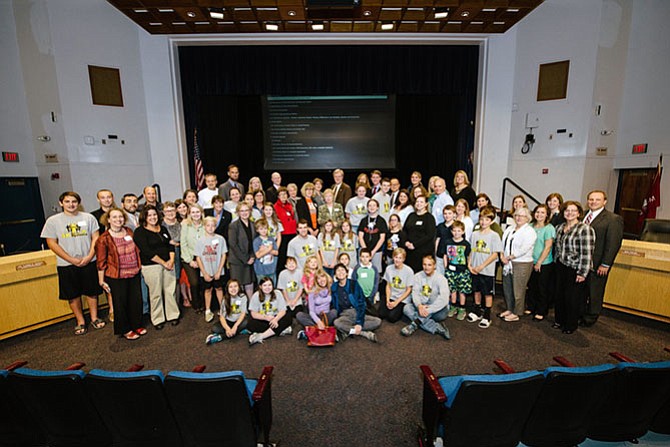 Members of Decoding Dyslexia Virginia came out in support of the Fairfax County School Board recognizing October as Dyslexia Awareness Month at the Oct. 22 meeting. Photo courtesy of Fairfax County Public Schools

Nine-year-old Maxwell Gebharts (center) was one of several individuals to speak at the School Board’s Oct. 22 business meeting on behalf of Decoding Dyslexia Virginia.

Nine-year-old Maxwell Gebharts stood confidently on a stepstool to address the Fairfax County School Board Oct. 22. “My old school didn’t know I was dyslexic,” he said. “I was very sad and felt like I wasn’t keeping up with everybody.”

Gebharts was one of several individuals to speak at the board’s Thursday night business meeting on behalf of Decoding Dyslexia Virginia, the local chapter of a national grassroots organization advocating for better teacher training and resources for dyslexic students, as well as connecting parents with existing resources.

“I hope you can make it so kids like me don’t have to leave their friends, don’t have to struggle,” Gebharts said. Board members and dozens of Decoding Dyslexia members and supporters applauded him when he finished speaking.

Calvin Rizek started working with an outside tutor in elementary school to help him overcome dyslexia and learn to read.

High school senior Calvin Rizek spoke next, explaining that he’s currently taking all his remaining classes at Northern Virginia Community College. “The way you have failed me is not approaching dyslexia properly,” he said. Rizek’s mother got him a tutor in elementary school after he was “not taught the correct way to learn to read” in Fairfax County.

“I’ve been in the school system 15 years,” Rizek said, “and I’ve been dyslexic the whole time, and not seen any change. Please act fast so you don’t fail anyone else.”

The speakers came to the meeting to coincide with the board recognizing October as Dyslexia Awareness Month.

Board members typically don’t respond to citizen participation, though chairman Pat Hynes has acknowledged professional development for teachers could be more focused in the area of dyslexia, and that the school system’s Strategic Plan calls for “getting tighter on early literacy.”

“I’m extremely excited to see the progress that we have going on not only in Fairfax County but in the Commonwealth of Virginia,” Braddock District representative Megan McLaughlin before she read the proclamation.

She described Decoding Dyslexia as being led by “by extraordinary women who have really helped to shape not only better practices here in Fairfax County, but within the Commonwealth of Virginia. To all of you, thank you so much for what you’re doing to improve the lives of our children.”

A workshop hosted by the Office of Special Education Instruction for parents of elementary school students with dyslexia is scheduled for Nov. 13 from 10 a.m.-12:30 p.m. at the Dunn Loring Center, 2334 Gallows Road.

Kate Hanley of the Fairfax County Electoral Board Office of Elections, formerly chairman of the Board of Supervisors and School Board representative from the Providence District, spoke to the significance of the later school start times for the Presidential primary on March 1, 2016.

WITH LOCAL ELECTIONS LOOMING, the board voted unanimously to have schools start two hours late on March 1, 2016, to accommodate the presidential primary voting.

Kate Hanley of the of Fairfax County Electoral Board Office of Elections, formerly chairman of the Board of Supervisors and School Board representative from the Providence District, spoke to the significance of the later school start times.

Hanley reminded the board “Super Tuesday” is a dual primary, with both parties fielding candidates for voting on the same day, at the same locations. “The whole thing is coming to town,” she said.

According to Fairfax County, 165 of the 196 schools and centers in the system are used as polling places.

“Voters must have free access to polls,” Hanley said, adding that starting later “will mitigate many of our problems,” such as parking congestion during pickup and drop-off times that coincide with heavy voting waves.