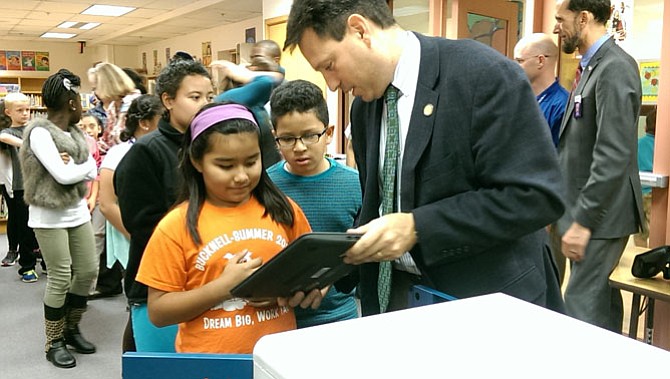 Del. Scott Surovell (D-44) checks out one of the laptop computers with a student at Bucknell Elementary School. Photo by Tim Peterson.

Bucknell Elementary School students from grades 3 through 6 listen to principal Tim Slayter (center) explain how and why their school is receiving more than 120 new laptop computers.

With school textbooks in Virginia being shifted to digital form, “it means everyone should get a computer,” said Del. Scott Surovell (D-44). Yet at schools like Bucknell Elementary School in the Mount Vernon area of Alexandria, a Title I school with a 73 percent free and reduced lunch population, many students don’t have computers or internet service at home to access those required resources.

“The county is B-Y-O-D: Bring Your Own Device,” Surovell said. “I think that’s unconstitutional.”

On Friday, Oct. 23, Surovell was joined by Paul Krizek of Christian Relief Services, Kathryn Falk of Cox Communications and other school leadership at Bucknell to announce the donation of more than 120 new laptop computers for students to check out and take home.

For three years, Surovell has introduced legislation aimed at closing “the digital divide,” which inspired Great Falls resident and Groveton High School graduate Don Rippert to reach out to him and offer to donate money for getting students computers. Christian Relief Services provided matching donations, totalling about $51,000 for the new laptops, according to Krizek.

Krizek said Bucknell was chosen because it is a small Title I school and a good place to “show what we can accomplish.” He added the collaborative team is talking with the Mount Vernon-Lee Chamber of Commerce to see if businesses will help sponsor additional schools to receive computers.

“Kids need to have the tools,” Krizek said. “They have to compete.”