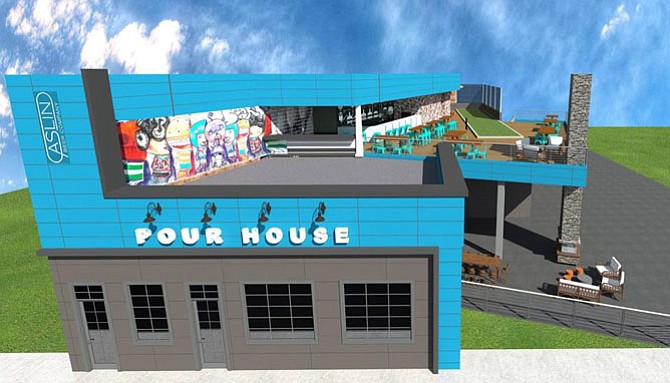 Aslin Beer Company, located in an industrial park on the fringes of the Town of Herndon, has found a new home. After tremendous growth since its founding in September of 2015, it is time to continue their growth as a brewery, said Andrew Kelley, one of the co-owners.

Kelley said he and the other two co-founders, Kai Leszkowski, and Richard Thompson, have found a new home for their Tasting Room (aka Pour House) and Sour Beer facility in Historic Downtown Herndon. The location encompasses the vacant building at 771 Elden Street formerly housing Horn Motors.

The company hopes to have the renovation completed sometime between the end of 2017 and early 2018. Aslin's new home will be within the planned downtown redevelopment area in the Historic District, steps from Herndon's Old Town Hall and within easy access to parking.

The new Pour House is designed to have approximately 2500 square feet of interior space, plus a 2500-square-foot outdoor space, including a rooftop deck and bar, bocce ball court, and a covered deck.

Herndon Town Councilmember Signe Friedrichs said, "Aslin's Tap Room will be a great addition to our Historic Downtown. I look forward to working with the owners."

According to the company website, since the inception of Aslin Beer Company, co-founders Kelley, Leszkowski and Thompson realized that beer was not the only product they offered — long lasting relationships between the company, employees, and customers were equally important. In their current operation, Aslin Beer Company strives to create a culture that celebrates beer with a passion and depth of knowledge that can’t help but be contagious to their customers. Aslin Beer Company is noted for their high-quality ales, lagers, and variants.

Les Zidel lives within walking distance to the new Pour House and did not know about the upcoming changes. Upon learning of the downtown's newest addition, Zidel said, "A microbrewery will add even more reason to go downtown to Herndon's lovable and lively center. Great food, art, shops, residences, festivals, and beer. Oh, what a place to be! I’ve got my mug ready."

In the new facility, Kelley said there would be a sour beer facility. He explained sour beer is style or subdivision of beers, like ales and lagers. Sour beers are fermented over a longer period with bacteria and yeast, in different vessels such as stainless steel, wood, or cement. While sour beers have a smaller following than traditional style beers, "They have been made for hundreds of years, most notably in Belgium and are starting to become more familiar."

Asked if they'd be serving food in their new location, Kelley answered, "Beer for right now, but we're planning to open our food truck at a time to be determined, one with farm-to-table style foods such as BBQ, salads, and charrette boards.”

Kelley said the team is excited to get plans underway. To introduce the community to the new business, Aslin Beer Company is hosting their second-anniversary party in the parking lot of their to-be-built new tasting room. The event is Saturday, Sept. 16, noon-6 p.m.

Former downtown business owner and Town Councilmember Richard Downer said, "I'm very excited that soon we'll be walking to downtown Herndon for an IPA at Aslin's. Their craft beers are fantastic. My son from Ashville, N.C., which is known for its microbreweries, was also impressed with Aslin brews."