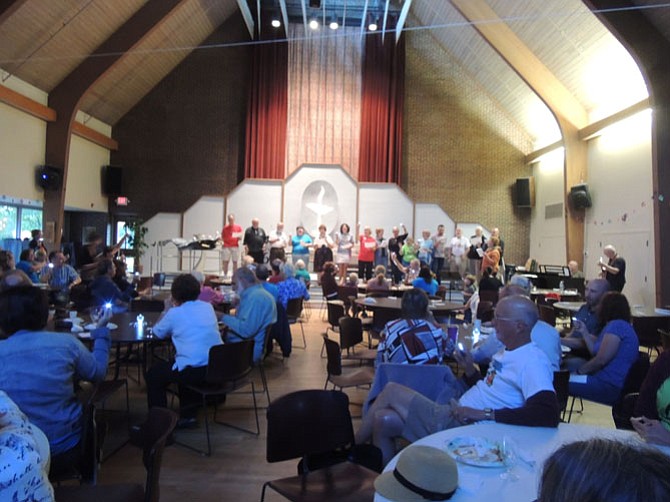 “What’s interesting about Mt. Vernon Unitarian Church is that it was not established from the top down, but rather by a group of Hollin Hills and Tauxemont families who wanted a liberal religious education for their children,” said the Rev. Kate Walker at the celebration of the church’s 60th anniversary on Sunday, Sept. 13. “Joe Remington, one of the founders after whom the chapel is named, went around to the Unitarian churches in D.C. and Arlington and liked what he saw, so he put an ad in a paper and about 100 people came to a meeting to discuss starting a Unitarian church.”

The families met in rented facilities including a school, which is now Paul Springs Retirement Community. In the mid-1950s they bought 10 acres at the top of Mason Hill from Mrs. Merle Thorpe, some members taking a second mortgage on their homes to raise the funds.

A small churchgoer eyes the giant shark-like piñata made for children’s entertainment.

“The founding congregation had love and vision and it took risks,” Walker said, “Those were all good qualities.”

The congregation sold some of the land for funds to build the meeting house in the 1980s, while keeping up the old mansion (Hollin Hall built in the early 1900s), the art deco greenhouse and its windmill, and the formal boxwood gardens. Recently the church installed solar and geothermal power at the Meeting House to reduce its reliance on the power grid and expanded its commons area. It hosts weddings and other ceremonies and meetings in the buildings and gardens.

The garden was the home of the Boxwood Concerts (1959-61), which attracted musicians such as Charlie Byrd, and the Boxwood Theater Company (1965-75), which later spun off into the Puppet Theater at Glenn Echo. In 1961, the church invited the Congress of Racial Equality (CORE) to use its facilities to train students as freedom riders in the South. During the late 1960s, church members led demonstrations in opposition to the Vietnam War and more recently against the Iraq War.

In 1969, MVUC was a founding member of United Community Ministries, which assists people who live in poverty along the Route 1 corridor, and MVUC volunteers continue to help at the hypothermia center at Rising Hope Methodist Church during winter months.

MVUC continues its social justice efforts. The congregation passed “statements of conscience” that allow it to work on preventing gun violence and supporting immigration reform. It has also been a leader in defeating don’t ask don’t tell and in legalizing same-sex marriage.