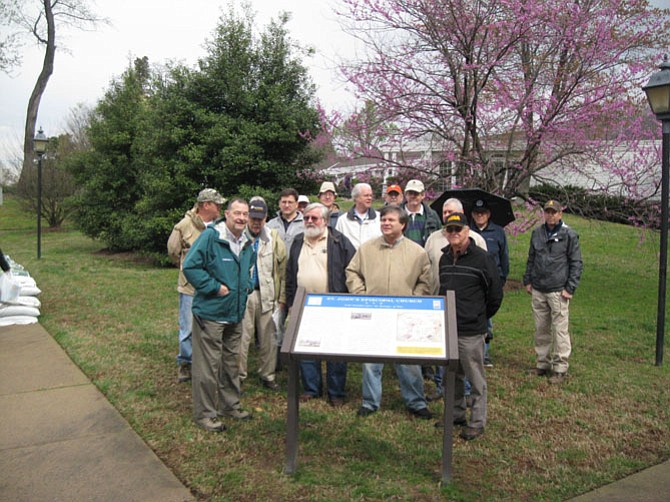 "We're trying to keep our heritage alive," said McAnaw, who said the tour was a fundraiser for the Fairfax Station Railroad Museum. "We're serious about the preservation of our heritage." Besides conducting local tours, the group also takes tours at historic sites in Maryland, Pennsylvania, and West Virginia.

"Fairfax County has such a rich history going back to Colonial times, the Civil War and World War II," said Myers. "There are existing historical sites that tell the history of America. You have to take the time to look around you and go to the local libraries, which are huge resources for historical data, or join a local history group."

He added, "There's so much history around, you just have to get out and walk around and research the local area."

And that's exactly what they did.

THE FIRST STOP on the tour was Battery Hill Redoubt in Centreville, a fenced-in Civil War site that was built after First Manassas and is located off Balmoral Greens Avenue and Cannon Fort Drive, and situated next to the Westfields Golf Club in Clifton. Nine embrasures used for artillery during the Civil War have survived 154 years and are preserved here by Fairfax County. The cannon embrasures or mounds of dirt with openings cut out of them had a platform behind them where guns and artillery could be positioned and fired from by soldiers.

"There was a plan to turn it into a park, but no money to implement the plan," said Myers.

The second stop was "A" Fort (Redan) in Centreville, which sits behind a fence off Balmoral Greens Avenue in Clifton. Oriented toward the East, it was an open structure with a trench line leading up to it and built to protect the railroad by both sides during the Civil War. It has four or five embrasures where cannons were once positioned. Down the trench line are remains of the embedded foundations of 12 rows of tents where the soldiers slept as well as rocks used for company cooking and remnants of latrine trenches.

Next, the cars drove down Union Mill Road in Clifton near Centreville High School where a Confederate trench line was preserved by developers between Stonefield Drive and South Springs Drive.

Then they stopped at St. John's Episcopal Church and cemetery on Mount Gilead Road in Centreville's Historic District. On the adjacent preserved 4-acre field, 40,000 Civil War troops set up their winter encampment in 1861-62, although some argue that number was closer to 24,000 troops. The land was recently spared from development with help from Board of Supervisors Chairman Sharon Bulova and U.S. Rep. Gerry Connolly, who have interests in historic preservation.

"Here, a lot of lessons were learned in handling troops," said McAnaw. "Centreville was so important because geographically it was the highest point locally."

They toured the graveyard at St. John's Church where they learned of Civil War soldiers Michael O'Brien and Dennis Corcoran being interred there in 1979. As soldiers in Wheat's Batallion, these rambunctious Louisiana Tigers during First Manassas were the first men to be executed for mutiny and bad behavior by their own soldiers during the Civil War.

NEXT ON THE STOP was Mount Gilead, the oldest house in Western Fairfax County, built in 1785 and originally used as a tavern. The caretaker of 20 years, Ted McCord, an archaeologist, said during the Civil War the house was occupied by officers of both the Confederate and Union armies. The home was spared during the war and has its original flooring and is decorated in Colonial Revival style furnishings. Outside the porch are remnants of a moat of a trench line used by soldiers during the war. Fairfax County acquired the property in Centreville's Historic District in 1996.

They got in their cars and headed down Pickwick Road near Leland Street in Centreville to see the Covered Way Park, which was restored by local developers. During 1861-62, the large trench coverings were used to be a way to get artillery pieces back and forth without being observed. There are three forts situated on the Covered Way property.

From Centreville, they drove back to Fairfax Station to see the earthworks on the Nancy Meade property on Smoke Rise Lane. Snaking behind the home is a long, continuous trench that was used as a defense line that protected the Fairfax Station railroad and built by Civil War troops.

Then the group headed over to the property owned by Dr. Dan DiLabriola, also on Smoke Rise Lane in Fairfax Station. His home was also built within a couple of feet of the defense line trench, now fully preserved, that was used to protect the Fairfax Station railroad.

When the tour was finished, one of the attendees, Mike Farrell of Arlington, had this to say of his experience: "There are a lot of things that are here that I didn't know about -- the trenches," he said. "I enjoyed it immensely."