Our Town” at CenterStage. 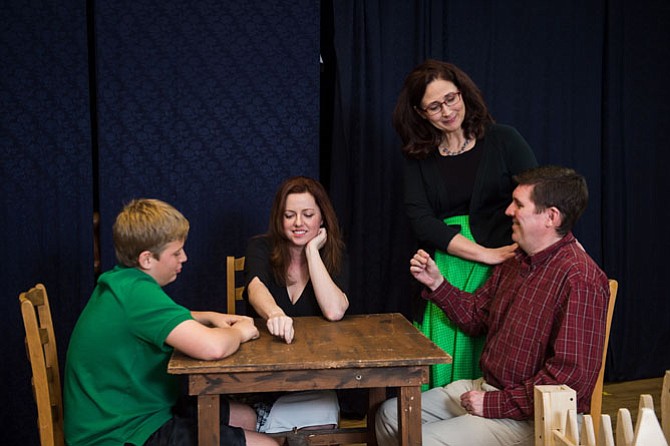 A masterpiece of American theater, “Our Town” is the enduring tale of small town life. Written by Thornton Wilder, the play won the 1938 Pulitzer Prize for Drama and has been an iconic mainstay of the stage. The Reston Community Players (RCP) production of “Our Town” will soon grace Reston’s CenterStage.

“Our Town” is about something way down deep that’s eternal about every human being” as one of the characters remarks. The dialogue and action speak to the preciousness of ordinary moments of daily life; innocence, wonder, love, marriage, squabbles, and then eternal life under the company of the stars.

Director Alana Sharp has cast an 18-member ensemble, many new to Reston audiences. For Sharp the play is “about lives of people we all can relate to. The play has a naturalness to it that resonates still, and perhaps even more so in these current stressful moments in world events.”

Like so many, Sharp was introduced to “Our Town” as a high school student. She has never forgotten its impact. For the RCP production, Sharp developed a unique aspect for the audience to partake. While the play’s narrator, called the Stage Manager, is usually a solo male character, Sharp reworked the role into a Mr. and Mrs. Stage Manager. This will provide for “strong storytelling in different voices; a man’s voice and a woman’s voice. The two will work in tandem observing and sharing the play with the audience.”

Janet Kohler Dueweke plays Mrs. Stage Manager. Duekewe considers “Our Town” simply “a timeless touchstone.” Working with a Mr. and Mrs. Stage Manager is “no gimmick at all. The two share new perspectives as they help the audience recognize the beauty and miracles of life, even life’s difficulties.”

The character of Dr. Gibbs is played by veteran actor Bob Chaves. His Dr. Gibbs “is a solid citizen, who will help anyone in need.” The play is “sweet with its universal message and appeal about relationships and living our lives fully each day,” said Chaves.

Lori Brooks plays the role of Emily Webb, a young women growing up before the audience’s eyes. Brooks described “Our Town” as “remarkable, a play that will speak to each of audience member differently based upon their own lives.” Webb has the privilege to deliver one of “Our Town’s” famous lines of dialogue; "Does anyone ever realize life while they live it...every, every minute?"