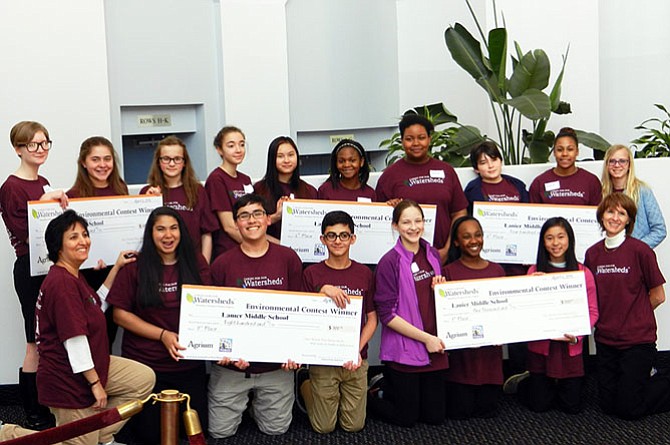 Students from Lanier Middle School won two first place awards at the fifth annual School Environmental Action Showcase (SEAS) held at George Mason University. Lanier teams took first place in the Caring for Our Watersheds competition with a plan to plant native grasses, and first place in their division of the KidWind Challenge for the most efficient wind turbine design.

The Lanier team plans to grow submerged aquatic vegetation in their science lab throughout the winter, then take a field trip to the Chesapeake Bay to plant the grasses in the spring. Lanier teams won five of the ten awards in the Caring for Our Watersheds event, placing third, sixth, seventh, and eighth in a field of 10.

Students from Dogwood Elementary took second place in the Caring for Our Watersheds competition with a look at how nutrient pollution and algal blooms affect the health of the local watershed.

A Crossfield Elementary team earned third place in the KidWind Challenge for wind turbine design and, along with the winning team from Lanier, were invited to compete in the 2016 National KidWind Challenge in New Orleans in May.

SEAS is hosted by NoVA Outside in partnership with George Mason University’s Potomac Environmental Research and Education Center. Student teams displayed the environmental stewardship projects underway at their schools, created videos about their visions of a greener future, competed for funding to further develop and implement wind energy and watershed protection projects, and participated in hands-on STEM (science, technology, engineering, and math) activities hosted by partner government agencies, nonprofit organizations and businesses.