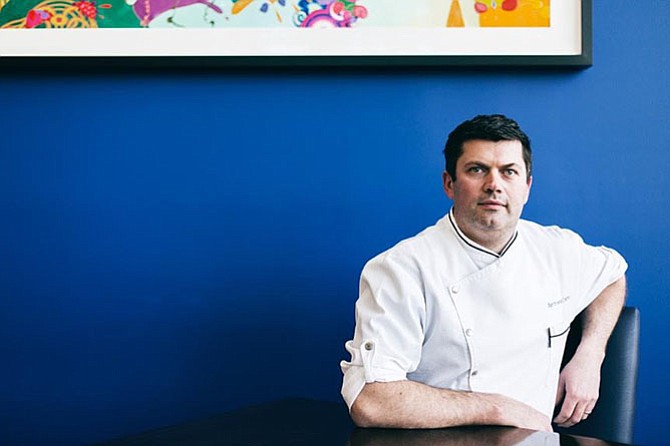 Bertrand Chemel, a native of the Auvergne region of France, is now a resident of Tysons Corner. Photo contributed

Whether you crave a whole Neapolitan pizza from Pizzeria Orso or an upscale dish with house-made fresh potato gnocchi from 2941, you must thank the mastermind—and master chef—behind these very diverse Falls Church restaurants. That would be executive chef Bertrand Chemel, a native of the Auvergne region of France and now a resident of Tysons Corner. His culinary odyssey from one culture to another is the stuff of any cook’s dream.

“I started cooking at the age of 16,” he said, “so when I was 14 I took a summer job working in a local restaurant. I wanted the job so I could buy a motorcycle.” His grandmother lived across the street from a bakery and helped him get hired to wash the floors and do the dishes. He returned again the following summer because he realized he loved the food industry.

After several years of an externship and one year in service to the army, Chemel got a lucky break, a job in Megève, France, the gourmet capital of the Alps, at the chef’s fine-dining institution Restaurant Michel Gaudin. “I worked there for 4 years,” he said, “There were just the two of us, and we did it all. From September to May, we worked 7 days a week.”

But thanks to his boss he got to spend time at Geneva's elegant Hotel du Rhône, where Gaudin sent all of his great chefs for training. Gaudin then sent him to a two-star restaurant in Southern France, when Chemel spent two more years before going to work at the Savoy Hotel and at the Connaught in London. With such excellent training, Chemel was ready for his next big step: a move to New York City to work for Daniel Boulud. “I told my parents I was going to New York,” he said. “My father laughed and my mother was scared.”

In Manhattan, not only did Chemel cook at Daniel restaurant and its sister, Café Boulud, he also worked for a fellow Frenchman from his hometown, Laurent Tourondel, at his now closed Cello restaurant. All that exposure to classic French cooking techniques shaped his culinary perspective, and when offered the chef’s job at 2941, he became the perfect fit.

Besides, he said, he and his family love living in Northern Virginia. “I was amazed by Virginia and its schools, beauty, and restaurants,” he said. “For me, it was like being back home with its rivers, former farming communities. My wife and I felt the same.”

Now overseeing 2941’s kitchen since 2008 and more recently, that of Pizzeria Orso, Chemel has worked hard to reshape both menus. He has transformed the former very pricy luxury 2941 restaurant into an upscale casual destination that fits the local economy. Obviously, the lakeside setting is the same, and Chemel always chooses the best local and seasonal ingredients.

“We went from high-end expensive ingredients,” he said. “We still use great ingredients but the cooking is now more about the creativity of the dish….We use as much local as possible, but for me local means from Pennsylvania to Georgia, the East Coast local.”

He added that his meats are free of antibiotics because he has researched where the animals are raised and what the farmers feed them. “We must know where the product is from…it is always quality ingredients.” And he has followed that rule with the restructured Pizzeria Orso menu.

In the end, Chemel feels that he and the staff have achieved the optimal course at 2941. “It took us 6 months to one year to find the right balance,” he said. “Now we have the right balance. We are doing a lot of things to get everybody excited.”

Chef Chemel notes that this recipe goes very well with grilled or fried fish or a chilled crab salad.

Drain off all of the cooking liquid from the tomatoes, and reduce the liquid to a syrup in a separate saucepan. Place the tomatoes back into the saucepan and cook them slowly at low heat until the tomatoes start to dry out (about 6 to 10 minutes). Add the tomato syrup to the tomatoes and cook over low heat for another 10 minutes. Remove the basil and lemon thyme, add the sherry vinegar, and allow the tomatoes to cool down to room temperature.