What We Did on V-J Day
Votes

What We Did on V-J Day

Vienna resident’s memories of the end of the war. 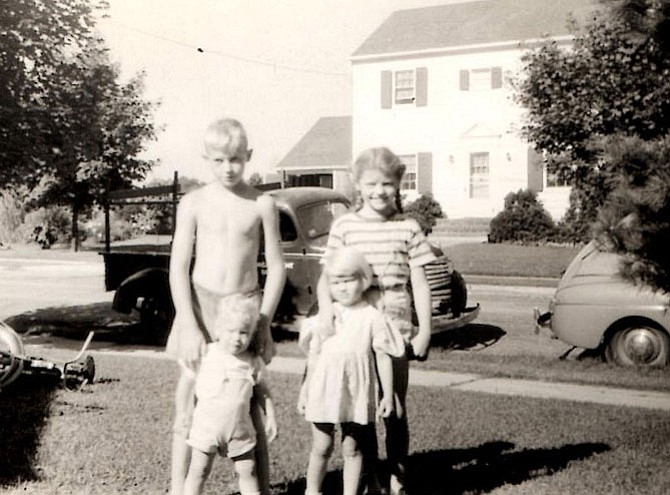 Luhrs children: Back row -- John and Meredith, Front row -- Warren and Linda, with the truck and its lumber rack in background. Photo Contributed 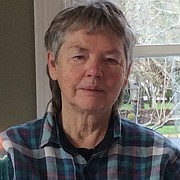 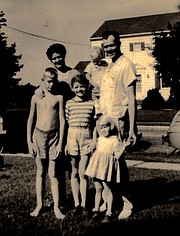 Henry and Elsie Luhrs with their children in 1946.

Memories of WW ll in an American child's mind are a distinct set of curiosities -- special activities removed from the ordinary day to day routine of growing up. We accumulated aluminum from candy wrappers, tin foil, and wrapped it into heavy, grimy balls which were then collected "for the war." Every boy had one in his pocket. Our mothers gathered to roll bandages for the Red Cross, volunteering "for the war." Evenings at six, we stood back and kept silent for the ritual of the nightly news, when our parents huddled around the radio, listening to serious and somber voices, hearing the strange names of places in the world become familiar by much reporting. Much straining to hear and shushing of innocent prattle identified short wave broadcasts coming over the Atlantic from London. These memories were completely somber, and remain so. I must turn the page when I recall a completely different set of events which are simply identified as V-J Day.

We lived by a lake, and my father was determined that every child in the neighborhood should be able to swim. Riding in the truck bed was a normal, everyday event for us bigger children, as my father came home from work every day at five during the summer, loaded any and all into the truck, driving to a park which had a lake and sandy beach...an ideal place to learn to swim. He taught us -- one by one -- to swim, and to enjoy the water. He also taught us to pick wild blueberries! This detail will explain why we were so surprised to see him in the middle of a summer day, and why it was natural for neighborhood children join in our V-J Day adventure.

It was a hot humid day in August. We didn't know it was V-J Day. The story begins when my father came home at noon. We quit playing and stood in astonishment at this never before event, immobile seeing him and his truck in the middle of the day. Smiling, he went straight into the house. A few moments later my parents came out and announced the war was over. Japan had surrendered. How we cheered. We danced with excitement as a roll of red, white and blue bunting was pulled from the front seat, and my parents began to unfurl it, securing it to the lumber rack of the truck. There was no protocol for celebrating the end of a war, so what happened next was a thoroughly American invention: Make noise and let the joy be heard! Pot and pans, lids and wooden spoons were rounded up, and distributed to neighborhood kids and to my older brother and me as we climbed into the truck bed. My mother got into the cab with the baby on her lap, and my little sister climbed in between her mommy and daddy. Then we were off! But where were we going?

My father was a boat builder on the bay shore of New Jersey. The natural thing, in his mind, was to drive through the towns along the shore of the Raritan Bay and make a lot of noise at the homes of his employees. So we started out -- Lawrence Harbor, Keyport, Keansburg, Belford, Leonardo. Everywhere we went, with our pot banging and shouting, we saw other people celebrating. Everyone came out onto their lawns, greeting us with jumping and waving, shouting and cheering. It was a day of victory, it was a day of joy. The war was over. It was almost dark when we pulled into the driveway, sweaty, hoarse, and happy. Mosquitoes stuck to our sticky arms and faces, those big ones! We were bathed and sent to bed with a great treasure -- the memory of how our family celebrated the end of the war. I was seven.

The author lives in Vienna.