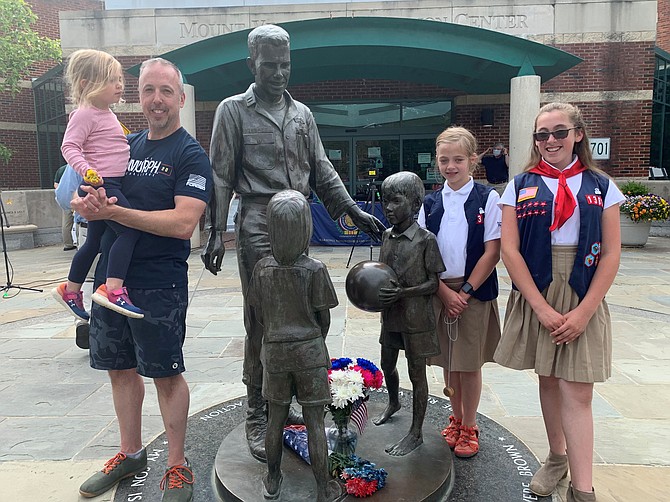 Paul Doerrer, holding daughter Helena, with daughters Lena and Marin at the Rocky Versace Plaza in Del Ray. The family paid a Memorial Day visit to the memorial to honor the city’s fallen veterans. Photo by Janet Barnett/Gazette Packet

The McNichols family holds an American flag in front of a wall of Gold Stars in remembrance of Alexandria’s fallen veterans May 25 at the Rocky Versace Plaza in Del Ray. Despite a stay-at-home-order, many individuals turned out on Memorial Day to pay tribute to local veterans. 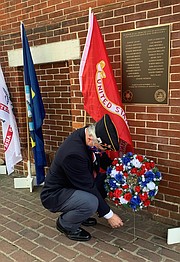 The ceremonies were unofficial and scaled back. But on Memorial Day, the gatherings were just as somber and determined that the sacrifice of America’s fallen veterans would not be forgotten.

“We were careful to keep our gathering to no more than 10 people,” said American Legion Post 24 Commander Henry Dorton, who officiated at a ceremony outside the Post 24 facility on Cameron Street. “Many more gathered across the street to observe and join us in honoring our veterans.”

The American Legion normally holds a public ceremony at the Alexandria National Cemetery and local Scout Troops are among the volunteers to place flags at veteran gravesites. But the Legion was informed that the cemetery would remain closed on Memorial Day, even to veterans looking to pay respects to their fallen comrades.

“It’s unfortunate that we were not allowed to place wreaths at the graves of past American Legion commanders,” said District 17 Commander Jim Glassman. “We were allowed in during the week to retrieve some wreaths, which we placed at the Tomb of the Unknown Revolutionary Soldier and the Veterans of Foreign Wars Memorial at Alexandria’s Amtrak station.”

In Del Ray, the Rocky Versace Plaza and Vietnam Veterans Memorial saw a stream of visitors during what would normally be a crowded Memorial Day ceremony honoring the 68 Alexandrians who were killed or are missing in action from the Vietnam War. Those names are inscribed next to gold stars in the granite Vietnam Veterans Wall that surrounds a statue of Versace, Alexandria’s Medal of Honor recipient.

“We may not have been able to hold the ceremony we hoped for, but we will never let our fallen veterans be forgotten,” Glassman said.