Potomac: The House That Dick Built 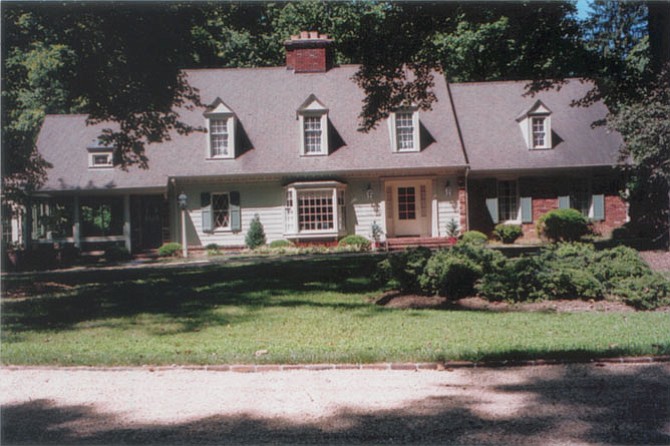 It’s the house that Dick built. And, the garage. And, the serpentine wall.

Dick Fitzgerald has been a Potomac resident since 1978 when he completed building the house where he and his wife, Anne, have lived since moving in “before the staircase banister was even installed,” he said.

“When I was a child in kindergarten the only thing I was interested in was houses. I drew pictures of houses while most kids my age were drawing cats and dogs,” he said.

However, it was a fourth grade, school field trip, that clinched his passion, not for houses, but for bricks. “The entire class went to see two houses being built and we watched bricklayers putting up walls. I went home and told my mother ‘I want to be a bricklayer,’” he said. 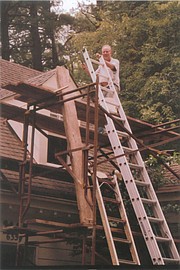 Putting the finishing touches on a garage dormer, Dick Fitzgerald said it took him much longer to finish the garage than it did their house. He did the garage completely alone, whenever time was available.

His interest in brick, from that day forward, has never stopped as has his enthusiasm for sharing his knowledge on the subject.

His first application for brick and its appropriate application to structures is deep seated and never ending.

Growing up in Washington, D.C., his family lived next door to where his bedroom window overlooked a brick rambler under construction. “I watched it being built and would go over, scoop up leftover mortar, get scraps of wood and then put little houses together,” he said.

The “little houses” he put together grew in such numbers he eventually was allocated about a hundred square feet in the family backyard. It became known as, “Dickey’s play yard.”

“I made my village with houses the size of cinderblocks, some two stories, some ramblers and some with swimming pools or patios,” he said. He also built a cemetery, surrounded by a stone wall. This is where he buried his pet goldfish and miniature turtles, complete with tiny headstones made from mortar.

All this happened when Fitzgerald, now in his mid-70s, was in the sixth grade. It wasn’t until nearly 25 more years following his graduation from Woodrow Wilson High School, five years of studying architecture at Columbia Technical Institute, marriage to his wife, the former Anne Crain, and the arrival of two daughters, Kerrianne and Lori, did his ambition to build a house finally come to fruition.

By then he was a full time superintendent with a masonry contractor in Virginia and owned a home in Bethesda. Following his day job in Virginia, he drove every evening to Potomac where he and Anne had bought a corner acre wooded lot and where Fitzgerald, in 1976, broke ground, fulfilling his dream to build a house into which they moved, July 1978.

“I would work on the house until dark every night and weekends. One carpenter framed while I did all the brick work. When football season started all my buddies left me, including those friends who assisted with mixing mortar, building scaffolding and carrying bricks up the scaffolds to me,” he laughed while remembering. 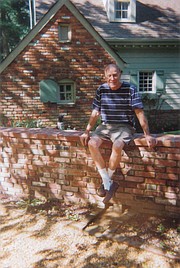 Perched atop the serpentine wall at his Potomac home, Dick Fitzgerald is seated in front of the garage he completed this spring. He cut out the garage window to his left from an old door frame he found in a Rockville junk yard. At right, the window, circa 1900, he found in a Rhode Island antique shop. “What caught my eye was one frosted glass pane in the center,” he said.

Thirty-seven years later, just maybe, but no guarantee, Fitzgerald has finished his dream place. It’s the love for bricks that kept him going from house to wall to garage. “I had my hands on every brick that went into this place,” he said. This includes a three-bedroom Williamsburg Cape Cod Cottage that features a kitchen with walk-in fireplace, spacious living and dining areas, three-and-a-half baths and a full basement. He estimated he used between five and six thousand bricks, each of which he approved, before finishing the house, and later, a garage and serpentine wall.

The Fitzgerald Cape Cod garage is an identical copy of one built in Washington in 1946, by the late Claude Johnson, a well known D.C. builder, admired by Fitzgerald since childhood. “It’s a Cape Cod two-car garage, a story-and-a-half high with a rope pulley for the upper storage area and a front door just like in the olden days,” he said. The shingled roof is identical to that on the house.

It was during the garage tour when the builder went into “brick language.” Suddenly, one is introduced to “stretchers” (the long face of a brick), “glazed headers” (one-half of the brick facing, perpendicular to the “stretcher”) and “salmon” a beautiful brick color, not the fish. He continued the “brick language” and included a 200-year-old hand-made “rubbed brick” (bricks rubbed together to smooth down), “gray glazed heads” ( two bricks rubbed together to lighten the color, then smoothed down), “incorporate brick work” (to keep bricks in line) which, according to Fitzgerald, the latter “is very slow work and takes forever.”

All of this style of brick work is incorporated in the Fitzgerald home place — house, garage and serpentine wall. Each brick was carefully chosen, each carefully placed. All of them were from Baltimore where each brick was made from top-notch clay and baked in an extremely hot oven for many hours. The antique bricks are thought to be between a hundred and two hundred years old and came from torn down old Baltimore row houses.

“Good clay makes good bricks,” this “brickologist” said. Without good bricks, chimneys flake and must be repaired. Not that everyone rides around locally looking for flaked chimneys, but if you happen to spot one, remember what the man says who knows his bricks. Good bricks come from good clay. There apparently isn’t good clay suitable for good bricks in the Washington, D.C., area.

Don’t ask, “Why?” Save the next lecture for that small pile of bricks left over in his yard. You will get the family history on each and everyone.

It is no exaggeration to say, “Dick Fitzgerald has bricks in his head.”