McLean residents, all age 16, produce film based on a Biblical parable. 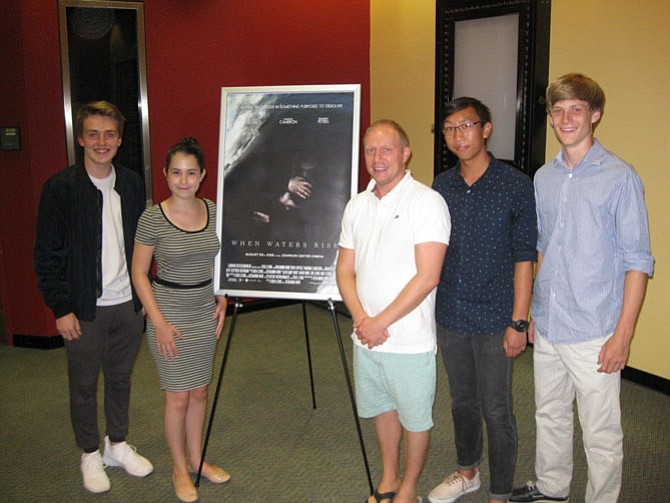 About 100 people attended a film premiere for "When Waters Rise" on Saturday, Aug. 20, at the Johnson Center Cinema at George Mason University in Fairfax. The 17-minute film was co-created by rising high school juniors from McLean -- Benjamin Hunt and Josh Leong with the music by Stephen Sheridan, all aged 16. After raising $2,750 on Kickstarter and social media with the support of 27 backers, it took them nine months to write, produce, direct, and make the finished product.

Benjamin Hunt, who attends Langley High School, said the film is a Biblical parable of the Wise and Foolish Builders from the Gospel of St. Matthew. "A weathered father and daughter struggle to find shelter in the midst of an unprecedented shoreline disaster," said Hunt. "Surrounded by despair, anxiety, and mass panic, the pair seek foundation on the rock in order to survive the storm - discovering hope, love, and comfort in each other’s trust. Wills are tested, and victory is found in a position of surrender to something stronger than both of them."

Josh Leong, who attends McLean High School, added: "This project was curated in response to the growing problem of depression and stress in today's youth. Our generation is constantly bombarded with overwhelming 'storms of life,' and this film seeks a solution to finding refuge in the midst of struggles -- whether that pertains to school, work, or personal-emotional life."

About 100 people attended the film premiere of ‘When Waters Rise,’ which was co-created by McLean residents Josh Leong and Benjamin Hunt.

THE DUO spent many Sundays after attending McLean Bible Church in Ben's basement developing the story. "After writing a first draft, we spent months tweaking the script until it reached its current form," said Hunt.

Leong added: "Most of the concept was written down within the first month of writing. We knew the aesthetic we were going for, and we had the same vision of taking this Biblical story and turning it into a visual art form. We focused heavily on the human drama, and the relationship between the father and the daughter. But everything we wrote remained true to the original parable itself -- we used the passage itself to guide and direct our chain of events, creating parallels in our characters with things in the real world."

Filming was done in three stages. In order to capture the sunrise shots, they woke up at 2:45 a.m. and headed to the Eastern Shore. They filmed for 16 hours on a beach and in the freezing cold waters of the Chesapeake Bay during March. They used a DJI drone for the aerial shots and a Glidecam for the fast-running shots. During Unit 2 of filming, they made use of high quality GoPro Hero 4's for underwater shots.

For editing, which was the most time-consuming part of the nine-month project, they used Final Cut Pro X, After Effects, and a few other software programs. They even worked with a visual effects artist from the country of Georgia to create a tidal wave -- all for a reasonable price. "Editing was a very complex process; we had to constantly make adjustments to the audio and video, including color and special effects," said Hunt.

"We had challenges, and successes, and it is so gratifying to see the finished product and share it with our friends and family," said Hunt. "We learned to be firm with vendors, but not pushy. We learned that every dollar spent matters and to spend wisely. And, we learned that two people managing a project may not always see eye to eye, but if they keep focused on the goal, they can achieve anything."

LEONG ADDED: "As I worked on this film, I felt God work on my own heart. I was living out the message of the film. We talk about storms of life, and I’m weathering one myself. Little by little I was taught not only how to direct, to communicate, to manage, to organize - but I was being taught how to use my talent for something bigger."

Ben's mother Amy Hunt, who attended the premiere, said: "It was awe-inspiring to see two young men lead a project from beginning to end with just talent, a dream and their faith."

Josh's mother May Leong added: "It's been an unbelievable experience of collaborating with friends and sharing a common passion in filmmaking. I've seen them work together in ways beyond what I've ever seen in myself while in high school to produce a piece of work that I'm extremely proud of."

Josh's father Jin Leong added: "I'm really proud of what Josh and Ben have done. They put in a lot of work and most importantly, the story of the film was meaningful and valuable."