On the Potomac at Riverbend
Votes

On the Potomac at Riverbend

Whether a newcomer or an "oldcomer" like me, I urge everyone to explore Riverbend Park and the Potomac as it flows by Great Falls. 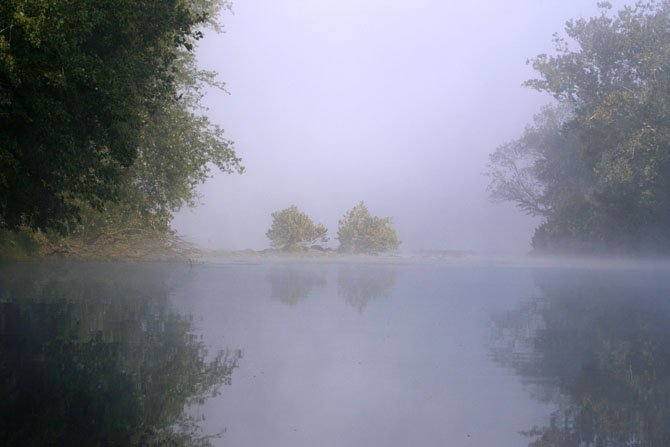 When you are sitting in a boat just 2-3 feet above the surface of the water floating by islands and underneath overhanging trees reflections seem to come at you from every direction. One morning as Ethan guided the boat around the end of one island I caught this image. I particularly like the symmetry in the positioning of the islands, the trees and their reflections all bathed in fog. Photo by Walt Lawrence 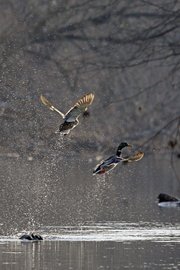 We drifted eastward along Bealls Island heading for this pair of mallards. I knew that they would take flight once we got too close so I started taking shots several yards away. All of a sudden both of them seemed to explode into the air, practically straight up, leaving a shower of water drops in their trail. The entire image shows a lot of energy and motion as the birds are lifting off and the drops of water are backlit by the late afternoon sun. I love images like this.

For the past several years I have been photographing the landscapes, landmarks and wildlife of this place we call Great Falls. During this period I have been to Riverbend Park numerous times with my camera, but in May 2012 I noticed a sign near the boat rental area that listed the rates for each type of craft such as canoes, kayaks and aluminum flat-bottomed jon boats. There was also a 2-hour rate for a Fairfax County Park Authority fishing guide to include a jon boat and fishing gear. I inquired if the guide would take out someone who was trying to catch photographs rather than fish. A couple of years ago I went out in a canoe on a local pond to take pictures but I could never keep the canoe headed in the right direction while I worked with the camera. So I thought that with a guide to run the boat I could focus all of my attention on the subject/scene and my camera. Two weeks later Ethan Kuhnhenn, the Park Authority’s fishing guide, and I pushed off from the Riverbend shoreline in the early morning and slowly made our way out into the river. This was my first time on the river and while the water level was low I found the flowing water to be extremely powerful. It was also foggy which made it difficult to see so our sense of hearing took over and we were treated to the sounds of water rapids coursing over and around rock formations and the calls of birds hidden by the fog.

A local photographer and friend of mine, Dean Souleles, took this image which shows Ethan and I doing our thing on the river. When you go out in a boat numerous times with the same person you begin to get to know each other. Ethan is not only an experienced guide and boat handler but I consider him a good friend. For me these times together on the river were almost like therapy sessions as they reminded me of times 60 years ago when I would go fishing with my father.

After that first trip I realized that there was much more to experience and to photograph than what could be accomplished in a single 2-hour trip. The river seems so serene and beautiful with its collection of islands scattered all the way from Riverbend Park to the Seneca Breaks which is just about at the far western edge of the Great Falls area. Even on a calm day with no wind and a low water level the force of the moving water is deceptively strong. The real power of the river is evidenced everywhere as trees, logs and debris have been swept down the river and snagged into jumbled piles against the western edge of each island.

I was able to shoot several images in a sequence as this bird left its perch along the banks of an island. The crisp focus of the bird against the island foliage with a bit of fog still in the air provides an almost jungle or tropical like feel to the scene. This is perhaps my favorite image so far and it even was awarded an honorable mention in a local art show this past spring.

This image was taken in winter as many birds would perch along the Maryland side of the river to capture the warmth from the late afternoon sun. I found this shot to be amusing as the great blue heron could care less about the mergansers as they are madly running on the water trying to get airborne and he seems just interested in soaking up the remaining warmth from the sun.

I even saw an aluminum canoe that had literally been wrapped around a tree trunk by the force of the water. The piles of debris notwithstanding I felt that the water with a backdrop of rocks and islands provided for some very interesting seasonal landscape and waterscape images. Another attraction was the birds, as I am particularly drawn to photographing them as they take off and land. I knew the river serves as a major flyway for migrating birds so the types of birds would change during the seasons. There were also opportunities to shoot other creatures such as deer, fox and raccoon on the islands and even snakes in the water. I talked with Ethan about going out on the river in all seasons of the year and he was very willing to support the effort so long as it did not interfere with his other duties at the park. Well we made 11 trips on the river between May 2012 and June 2013 including January and February. As a result of this effort I began to develop an extensive collection of images that I call “On the Potomac at Riverbend” which has become a logical extension of my primary collection of “Images of Great Falls.” 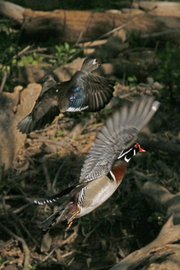 We had seen a few of these birds in flight on previous trips but in the spring we came across this pair sitting right on the water. Like the great egret they are very skittish and this was the only shot I was able to get. The males can be quite large but both the male and the female are beautifully marked.

As spring began to breakout in late April I was drawn to the budding yellow and green colors of the trees along the river banks. This image of the white structure tucked along the dark water’s edge embedded in the yellow-green of the foliage seems to have an almost painting-like quality. I have this image printed on canvas and it looks even more like a painting. 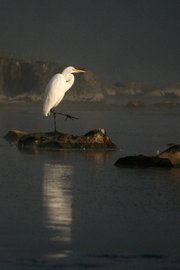 In my 30 plus years in the area I have never seen a great egret in Great Falls, so on a foggy morning in September I got my chance when we spotted about four of them on different rock outcroppings. They are truly magnificent as the early morning sun caught this one just as he was getting ready to move and I captured this pose with one leg up. These birds are the size of great blue herons yet quite skittish and just seem to spend the summer in the Potomac.

The stretch of river that I am concentrating on begins at the warning buoys west of Conn Island and extends westward to Pond Island, which is off the end of Seneca Road. This covers about 5 miles of the Potomac with several named islands and countless rock formations, some of which are visible above the water line and many that can only be found with the bottom of the boat. I realize that the river and the islands are part of Maryland and that I am stretching the geographical definition of what may be technically called Great Falls but that’s for another story.

Each excursion on the river was unique, as water levels changed, the islands and wildlife provided seasonal variations and, of course, the light was always different. I discovered birds that I had never seen before, especially the migrating birds that either just rest on their way north or south and those that stay for the season. While Ethan is a professional fisherman and possesses incredible knowledge of the river he also is very skilled in spotting and identifying birds. We saw all kinds of birds but I was not always lucky or skilled enough to get good shots in every instance. While we spotted eagles, osprey, hawks and turkeys, to name a few, I was unable to capture any collectible images of these creatures. I had hoped to get some images with snow and ice but the weather was pretty mild this past winter so these are likewise scheduled for future trips.

So my quest for images of Great Falls never seems to end and I look forward to making many more trips on the river to capture more of the beauty that surrounds our daily lives. I would also add that Ethan says the fishing is very good in this section of the Potomac so perhaps I may put down the camera for a while and try my hand with the rod and reel. Whether you are a newcomer to Great Falls or an “oldcomer” like me I would urge everyone to check out Riverbend Park and the Potomac as it flows by this place we call Great Falls. It’s here in our own backyard!

I have selected but a few of the images that I have collected for this article, I hope you enjoy them. I will be exhibiting some at Katie’s Coffee in Great Falls during the month of October and the entire collection will be featured in my studio during the Great Falls Studio Tour on Oct. 19th and 20th. If you have any questions or comments about my work please feel free to email me at waltlawrence@cox.net or call at 703-757-6762.