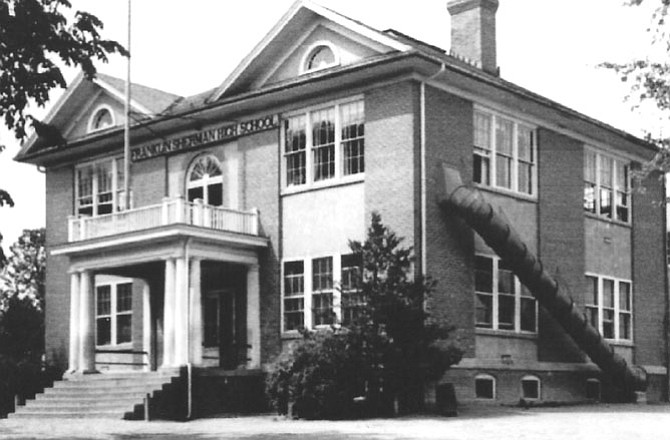 A village that became known as McLean is simply a community that sporadically developed around a trolley stop. It can trace its beginning to 1902 when John R. McLean and Senator Stephen Elkins of West Virginia obtained a charter to operate an electrified railroad, that was named the Great Falls & Old Dominion Railroad. This was simply a business venture to promote the scenic beauty of the Great Falls of the Potomac. The line of the fourteen mile trolley ran between Rosslyn and Great Falls Park, linking with Washington D.C. via the old Aqueduct Bridge. Its rails were laid through forests, farmland, and fruit orchards, bypassing the existing villages of Lewinsville and Langley. The trolley began operating July 3, 1906 with a trial run to Great Falls Park, but its first scheduled passenger trip was the following day, July 4, 1906.

ONE OF THE STOPS was at Chain Bridge Road which has been a major transportation artery through Fairfax County since colonial times. At first, the stop was called Ingleside after a subdivision that was beginning to develop along Elm and Poplar streets, which is now Beverly Road. However, a hub of activity quickly began to form at that location and by 1910 residents began calling the Ingleside stop “McLean” in honor of one of the trolley’s founders, who was also the publisher of the Washington Post and Cincinnati Enquirer newspapers, and so, the next stop down the line to the west became known as Ingleside. In June of that same year Henry Alonzo Storm took over the operations of a general store that was located at Chain Bridge Road between the tracks and Elm Street, which included the McLean Post Office. In 1911 the Chesterbrook, Lewinsville, and Langley Post Offices were abolished and the latter two were folded into the existing McLean Post Office. There was no depot. People either purchased their tickets at Storm’s Store or from a conductor on the train. The day that Storm opened his general store is considered the beginning of McLean. There was no celebration. The “town” was not founded and it was never incorporated. There is no record that John McLean ever set foot on turf at the McLean stop.

The Great Falls & Old Dominion Railroad had a tremendous impact upon the Northern Virginia countryside because it provided easier transportation to and from the District of Columbia. Farmers found it less difficult to get their crops and dairy products to market. Many businessmen discovered the art of commuting and sought permanent or summer homes for their families in the countryside. Little settlements, such as Franklin Park and El Nido, developed at stops along the route, but the area surrounding the McLean stop underwent the most change: it was important for residents, organizations, and business to locate near that location.

For instance, St. John’s Episcopal Church, built in 1877 along Georgetown Pike east of Langley Fork, was mounted on casters and hauled across fields to a site on Chain Bridge Road, not far from the McLean stop. The Franklin Sherman School, the county’s first consolidated public school, opened in 1914 with 29 students, facing what was later named Corner Lane. Initial meetings began in 1916 concerning what would ultimately become the McLean Volunteer Fire Department. The MVFD incorporated in 1923 as Station No. 1 in Fairfax County and a two-bay station was built that same year on Chain Bridge Road a block south of the stop. Members of Sharon Lodge 327 built the Sharon Masonic Temple at Emerson Avenue and Chain Bridge Road in 1921 and the congregation of McLean Baptist Church erected its first church in 1923 on Emerson Avenue adjacent to the lodge.

The demise of the hamlets of Lewinsville and Langley began with the arrival of the Great Falls & Old Dominion Railroad and subsequent closing of their post offices. The tracks did not connect with either village, but instead ran between them. It was natural that development would take place around the stop at Chain Bridge Road and an amorphous village-like settlement began to develop in a hodge-podge fashion, spreading out from there. The growth was slow, but a spirited community developed that centered around Storm’s Store, the Franklin Sherman School, and the McLean Volunteer Fire Department. Soon there was a civic association, library, and several churches. Little thought was given to a nondescript intersection just down the road at Chain Bridge Road and Leesburg Pike called Tysons Crossroads. By the early 1930s, ridership on the trolley began to decline with the rise of the automobile. The railroad was forced into receivership and abandoned the route on June 8, 1934. Its tracks were removed. The roadbed was turned into Old Dominion Drive.

It was after World War II, when many who came to Washington, D. C. to support the War effort decided to stay, that McLean’s rural lifestyle started to change. Combined with the CIA locating at Langley in 1961, a steady increase in population began and McLean found itself in the midst of phenomenal growth. There was no plan. McLean never became a separate town or city. It lost any opportunity to incorporate, when, in 1968 Fairfax County adopted an urban county form of government, and so McLean remained a community.

Storm's General Store and Post Office opened beside the tracks of the Great Falls & Old Dominion Railroad in 1910.

TODAY the windmills, farms, and orchards are gone. Notable dairy farms such as Maplewood, Sharon, Storm, Ballantrae, Spring Hill, and Kenilworth have been replaced with subdivisions and homes on a grand scale. A “sleeping giant” awoke at the nondescript intersection that few gave much attention to, and suddenly McLean found itself overshadowed by Tysons Corner. Yet, the community spirit and rural flavor of the area has remained. However, one has to wonder about the future of McLean, with the urbanization and continual expansion of Tysons Corner, and opening of the Washington Metro’s new Silver Line. Will the village of McLean go the way of Lewinsville or Langley? Hopefully this will not be the case and the community will not lose its identity, or get “gobbled up” in the enthusiasm of progress.

Carole Herrick is the chairman of the Fairfax County History Commission, vice-president of the McLean Historical Society and has authored seven books.