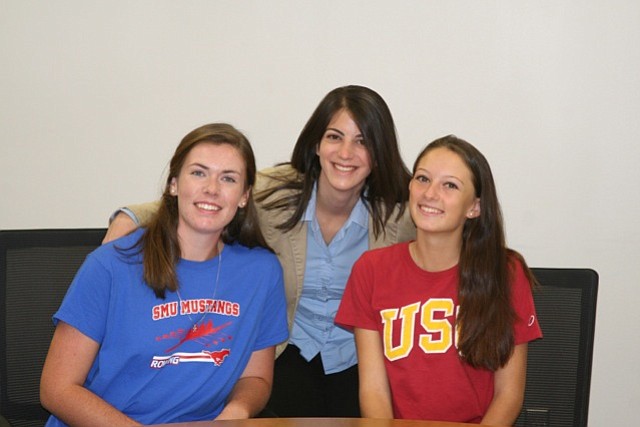 Jenna Rosen has committed to the University of Southern California's women's rowing team as a coxswain starting in the fall of 2017. Both athletes signed their Letters of Intent in a ceremony at Langley High School on Nov. 10.

Pierce was in the 2015 Virginia State Champion J8+, placing 10th at the Scholastic Rowing Association of America's National Championship Regatta. In the off-season, she rows for Resilient Rowing Club out of Occoquan, Va., competing in nationally recognized regattas such as the Head of the Charles and USRowing Club Nationals. She is excited to begin her studies in Biology and Russian at SMU, and can't wait to be a member of the Mustang Rowing Team.

Rosen has had success at the high school and club level, coxing her high school JR8+ to a win at the VA State Championships, and twice to semifinals at the SRAA National and Stotesbury Regattas. With the highly competitive TBC Racing club team Rosen has won 2 Silver medals at Club Nationals, and multiple wins at regional regattas. She also coxed her TBC Racing boats to 2nd and 3rd place finishes at the Canadian Henley Regatta, and this fall she coxed the women’s 1st 8+ at the Head of the Charles. Rosen is a member of the National Honor Society and has been recognized as a National Merit Commended Scholar.

Rosen is very excited to join the Women of Troy.