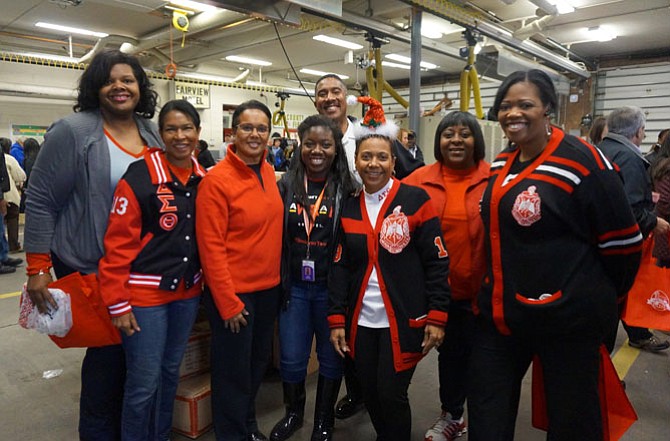 Fairfax County Firefighter Dave Saunders, with his 14-year-old son and chief elf Hunter Saunders, pose with a child from the county’s Head Start program during the annual Firefighters and Friends toy distribution day Dec. 11 at Station 11.

Christmas arrived early for more than 250 children from local Head Start programs as they picked out toys and visited with Santa during the annual Firefighters and Friends to the Rescue toy drive distribution day Dec. 11 at Penn Daw Fire Station 11.

“We distributed over 3,000 toys to 80 schools, shelters and nonprofits in Alexandria and Fairfax County,” said Capt. Willie Bailey, who founded the toy drive 17 years ago. “Prior to the distribution to school representatives, we escorted and gave toys to local preschool kids.”

Bailey, a councilman in the City of Alexandria, said that 550 new coats were also given out to children in need. “In addition to the toys and coats, we gave out over 100 new bikes and 400 books,” he noted.

“Many of these kids wouldn’t have Christmas if not for this.” — Police officer Bennie Evans

Angela Maxley, left, and 1-year-old Shiatzu Avivii of Caring Angels Therapy Dogs bring a smile to a preschooler during the toy drive distribution. 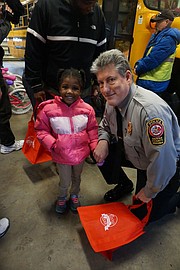 Nearly 70 volunteers were on hand to help distribute the toys, including representatives from local police, fire and sheriff’s departments.

“Many of these kids wouldn’t have Christmas if not for this,” said Alexandria police officer Bennie Evans, who has volunteered the last four years. “This is a beautiful thing for the kids and really brings the community together.”

Hopkins House CEO Glenn Hopkins accompanied 44 Hopkins House preschoolers as they selected toys and books from the thousands distributed at the annual event.

“What Willie Bailey has done is just terrific,” Hopkins said. “The parents of these children really appreciate it.”

Other volunteers included firefighter Dave Saunders and his son Hunter as Santa and his elf along with Caring Angels Therapy Dogs and their handlers.

Sheriff Dana Lawhorne and ACT for Alexandria president John Porter were also on hand as representatives from schools and social service agencies throughout the region selected toys for children in need. Porter has known Bailey since his time as principal at T.C. Williams High School.

“I think Santa Claus is running a close second to Willie Bailey,” Lawhorne said jokingly before getting serious. “No doubt Willie learned the true meaning of community service by watching men like John Porter. They are the best at helping those in need in this community.”