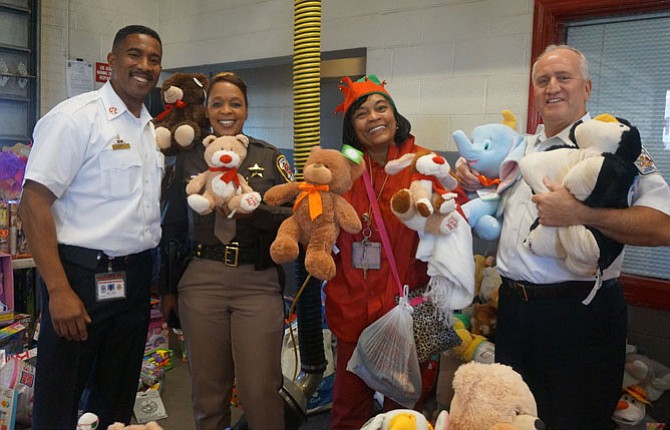 “It’s incredible to see the community come together like this.”

Christmas arrived early for more than 250 children from local Head Start programs as they picked out toys and visited with Santa and Superhero Flash Max during the annual Firefighters and Friends to the Rescue toy drive distribution day Dec. 15 at Penn Daw Fire Station 11.

“We distributed over 3,000 toys to 65 schools, shelters and nonprofits in the City of Alexandria and Fairfax and Prince Georges counties,” said Capt. Willie Bailey, who founded the toy drive 16 years ago. “Prior to the distribution to school representatives, we escorted and gave 250 toys to local preschool kids.”

Bailey, a resident of Del Ray and councilman-elect for the City of

Alexandria, said that 500 new coats were also given out to children in need. “This was done with the support of numerous local businesses including the police and Sheriff’s Office,” he said.

Fairfax County Fire Chief Richard Bowers was on hand to help with the toy distribution, which also included bikes, gift cards and books.

“This is a very special day,” Bowers said. “It’s incredible to see the community come together like this. It gives the children a start and place to look for a finish in life.”

Volunteers included firefighters Mike Furman as Superhero Flash Max and Dave Saunders and his son Hunter as Santa and his elf. GO TEAM Sit Means Sit volunteers were on hand with therapy and comfort dogs.

“It’s wonderful seeing Will continue to give back to the community.”

“It’s wonderful seeing Will continue to give back to the community,” said ACT Executive Director John Porter. “From backpacks in August, coats in October and toys in December, Will continues to be concerned about those in need in Alexandria and Fairfax County. He’s amazing.”

“We have Santa, a superhero — everything a kid wants in life in one place at one time,” Bowers said. “Will does a great job and makes this a special day for everyone.”