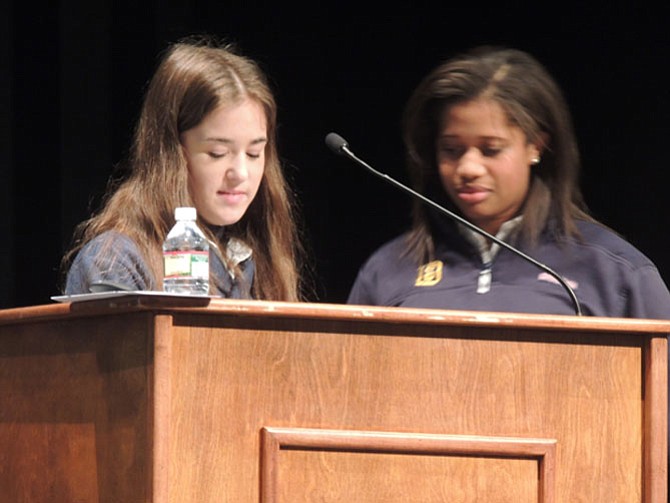 Amanda Kay and Skylar Jordan explain their proposal to the audience. Later they were chosen as the winners. Photo Contributed

As the winners of the Bullis Spaceflight Experiments Program (SSEP), Amanda Kay and Skylar Jordan’s experiment will be launched on the spring/summer 2016 International Space Station (ISS) payload. What an accomplishment for these Bullis sophomores! 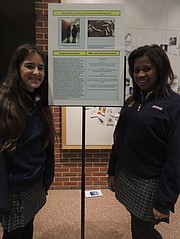 Amanda Kay and Skylar Jordan with their poster of the winning Bullis Spaceflight Experiments Program proposal. 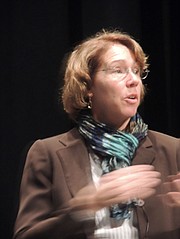 Dr. Sandra Magnus showed photos of the life of an astronaut on the International Space Station.

On Jan. 21, “SSEP Night Out – Celebrating our Finalists in the Student Spaceflight Experiment Program” was held in the Blair Family Center for the Arts at the Bullis School. The top 36 finalists displayed their experiments in a Poster Gallery, and discussed their proposals with faculty, parents and other students.

Bullis is part of the SSEP program that enables students to send experiments up to the International Space Station to be conducted by the its astronauts. Four-hundred Bullis students submitted 209 formal proposals detailing experiments to be conducted in microgravity aboard the International Space Station as it flies in low Earth orbit. After culling through the hundreds of proposals, 36 semi-finalists were placed before an outside review committee of science experts, and three finalist teams were selected. The program is intended to simulate the process that scientists follow when seeking research funding or access to unique research resources.

Dr. Sandra Magnus, an American engineer and a NASA astronaut was the keynote speaker. Selected to the NASA Astronaut Corps in April 1996, Magnus flew in space on the STS-112 shuttle mission in 2002, and on the final shuttle flight, STS-135, in 2011. She spoke about her missions, what it is like to work on the International Space Station and showed photos of the living and work spaces, the astronauts and their jobs there. She said, “ISS is a busy place. We spend a lot of time just managing everything from cleaning to experiments, spacewalks and robotics. Astronauts must exercise 2 hours every day, because the lack of gravity turns the muscle mass into jelly. My work on the ISS was interesting and exciting – and I particularly loved to take unbelievable photos of earth and space.”

Board of Trustees member, Bullis parent and Review Board member Kerry Wisnosky said, “This project is building a foundation for what we need in the future. Going through the proposal process was as compelling as determining the science of the proposal – and it was conducted exactly as we do in business. These were high quality proposals and it was really difficult to choose the finalists.”

Besides the winning proposal by sophomores Amanda Kay and Skylar Jordan, the other final proposals were “Growth of Aloe Vera in Space” by Joey Chimara, Olivia Kazanjian, Danielle Dyer and Marianna Anagnostou and “The Effect of Microgravity on the Birth Rates and Early Development of Nothobranchius rachovil” (small freshwater annual fish) by William Evans and Liam Vinal.

Amanda and Skylar’s proposal, “Shewanella oneidensis and Iron Ions in Microgravity” purifies drinking water using shewanella, bacteria with the ability to reduce heavy metals (iron and manganese) metabolically. Amanda said, “This experiment will benefit both the ISS as well as our society because of the need to find ways to remove heavy metals from our industrial water run-offs.” Sklyar said, “Water contamination is very bad for the population because it affects lives, especially children and the environment. Finding a way to purify the industrial run-offs is extremely important.”

While the experiment is being performed according to the proposal's specifications by the astronauts, a control experiment will be conducted on the Bullis campus.

A Mission Patch by Bullis sophomore Princess Ke will also be placed on the Bullis SSEP Project aboard the ISS for Mission 9.