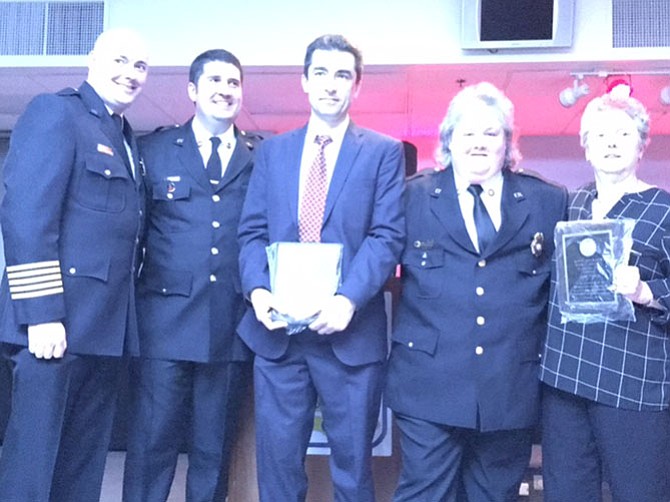 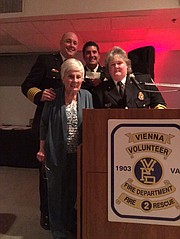 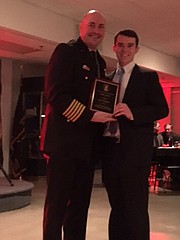 Approximately 130 friends of the Vienna Volunteer Fire Department came out on Feb. 6 to salute the department’s volunteers and staff for service to the community in 2015. The banquet and recognition awards program was held in the fire station’s Flame Room for invited guests. VVFD president Anthony Stancampiano, fire chief John Morrison, and Auxiliary president Joan Dempsey co-hosted the program. New officers of the department and of the Auxiliary were sworn in by Town Council member Linda Colbert.

On behalf of the VVFD, Morrison and Stancampiano recognized Adam Searle as Firefighter of the Year

and Kelsey Lanza as EMT of the Year. Jason Crawford received the Robert Hunter Award, given to the career person who best embraces the volunteer/career relationship during the year. The Chief’s Award went to Kevin O’Callaghan, and the President’s Award to Howard Springsteen. Lydia Russo received VVFD’s Certificate of Appreciation. Searle also was named Volunteer of the Year.

The Vera I. Lloyd Award honored the entire Vienna Volunteer Membership for its support of the Auxiliary.

The Auxiliary, through its fundraising efforts, presented a check for $20,000 to the department.

Volunteers logged more than 30,000 hours of service in 2015, averaging over 260 hours per person. Many volunteers have served for more than 10 years with the VVFD and Auxiliary. Local businesses offered support for the awards program.

The evening began with a social hour, followed by dinner, awards presentations and dancing.

To learn more about the Vienna Volunteer Fire Department, go to VVFD.org. The VVFD Auxiliary is actively recruiting new members. For information on the Auxiliary and its many support arms, email Joanie@vvfd.org.