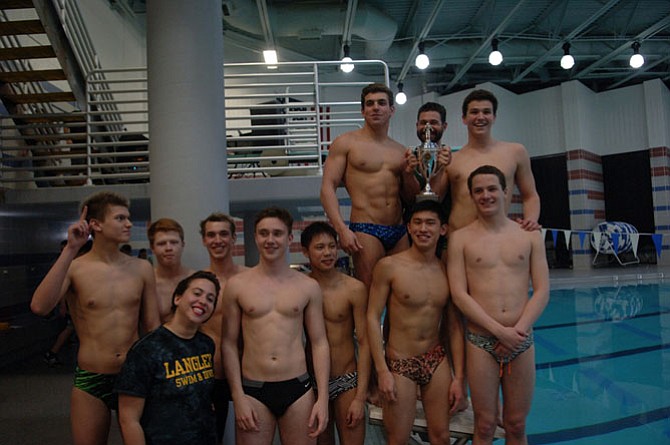 Langley sophomore Casey Storch won the 200 IM and placed third in the 100 breaststroke at the 6A North regional meet on Feb. 6.

The Langley boys’ swim and dive team entered the season hoping for a top-three finish at regionals and states.

After a championship performance last week, the Saxons’ goals have shifted.

The Langley boys won the 6A North region championship on Saturday, Feb. 6 at Oak Marr Recreation Center. The Saxons finished with a score of 229.5, holding off runner-up Patriot (215).

Langley head coach Ryan Jackson said the Saxons put themselves in position to win with a strong performance on Friday during prelims.

“It sunk in last night when I went home and scored out how we did in prelims,” Jackson said. “We did well last night. We put ourselves in position, event after event in prelims, to be in the place to score points. We had all three relays in the top eight. We had swimmers come back in every event. We had points coming from diving from Wednesday. We really had a complete team show up and we swam great.”

Langley’s victory came one week after the Saxons took home the Conference 6 title on Jan. 30 at Washington-Lee High School.

Sophomore Casey Storch had a strong regional meet, winning the 200 IM with an All-American-qualifying time of 1:49.29.

“I feel that was a strong race,” he said. “Going into it, I was a little scared of all the other guys coming back. I ended up going out really fast in the first half but I felt strong the whole time.”

Storch also placed third in the 100 breaststroke with an All-American time of 56.1, which also bested the previous meet record of 56.5, and helped the 200 medley and 400 free relays finish third.

“He’s just so talented,” Jackson said about Storch. “It looks effortless, but he just gives 100 percent. He anchored the [400] free relay right after the breaststroke, he split a 45 low ­­­ just incredible. That’s right up there with the big boys in the 100 free ­­­ and right after swimming the breaststroke. He’s definitely talented and he has a lot of poise, as well.”

After Saturday’s region championship, Jackson, who announced to the team earlier this season that he will take a break from coaching after 12 years with Langley, said the Saxons' outlook for states has changed.

“I think our goals have shifted a little bit in terms of a top-three finish,” he said. “Maybe we’re going to try to take a sweep.”

The Langley girls’ swim and dive team finished runner-up at the 6A North region meet.