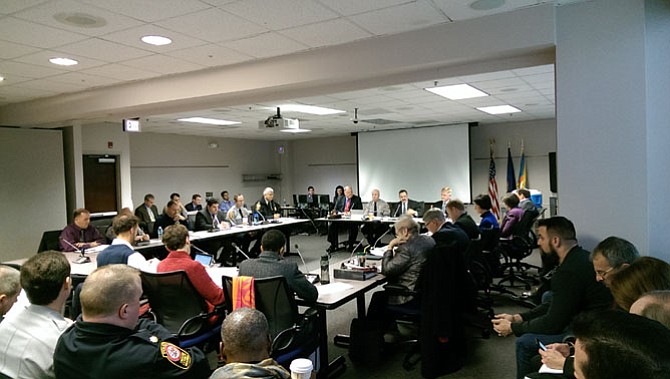 The Board of Supervisors Public Safety Committee met Feb. 9 to go over a basic plan “matrix” for implementing recommendations from the Ad Hoc Police Practices Review Commission of 2015. Photo by Tim Peterson.

Just over a year since Natasha McKenna died following multiple shocks from a taser, while in custody at the Fairfax County Adult Detention center, her name was never raised during the Feb. 9 meeting of the Fairfax County Board of Supervisors Public Safety Committee meeting. Two audience members stood on one side of the Government Center conference room, holding posters bearing a picture of McKenna’s face and text including “Black Lives Matter.”

The Committee met to hear overviews of a matrix of recommendations from the Ad Hoc Police Practices Review Commission that met in 2015, as well as Diversion First, a collaborative initiative to help offenders with mental illness be directed to proper intake, evaluation and treatment services rather than simply be dumped at the jail or emergency room.

When the Ad Hoc Commission presented its 142 final recommendations to the Board of Supervisors last fall, County staff transformed the list into a robust spreadsheet organizing each recommendation beside its lead agency, other stakeholders, crossover with prior recommendations from the Police Executive Research Forum (PERF), any required legal review and the ultimate authority that would give approval of the change.

In some cases, staff determined one recommendation contained sub-recommendations that ought to be considered independently from the parent. Including those, the matrix contains just over 200 items, according to Deputy County Executive Dave Rohrer.

THE MATRIX is intended to help with potentially implementing recommendations and eliminate redundancies with the PERF report assessing Fairfax County Police’s use of force policy. “Many of the recommendations are solid,” Rohrer said, and some are “already being used by the police department in making changes.”

Rohrer said the force has, since the final recommendations of the commission, worked on its use of force policy and helped bring about Diversion First.

According to Rohrer, an implementation committee including members of the 2015 Ad Hoc Commission will meet to help the Board of Supervisors work through the recommendations.

Chief of Police Edwin C. Roessler followed Rohrer with a brief presentation on updating the department’s use of force policy.

Focusing on the three areas of the force’s mission to protect and serve, developing a culture of safety and keeping pace with urbanization, “law enforcement profession needs to re-engineer itself,” Roessler said.

“Things are changing. In the last two years, there were gaps in policing.”

Of changes already in the works, Roessler pointed to his call for an on-site national accreditation assessment of the department spanning 400 standards, as well as new guidelines for hostage barricade situations.

Roessler’s department will also be rolling out a new Critical Decision-Making model for officers, he said, that will become part of all training and will be continually reinforced through training year after year, as well as introduced at the academy.

“The first six months of academy will be successful building blocks to making decisions out in the community,” Rossler said. “This all lives and breathes the recommendations from our community.”

Members from five police organizations sat around the table. Det. Sean Corcoran, president of the Fairfax Coalition of Police Local 5000 and a member of the Ad Hoc Commission, offered a defensive perspective on the recommendations matrix. He said it’s raised a level of anxiety among officers on the streets.

“Why does it feel on some level like we’re doing something wrong?” he asked. He wanted to remind the committee “We’re making a good organization better.”

“It’s important you continue to be at the table with us,” she said. “We are the safest jurisdiction of our size in the nation. I hear what you’re saying, that you’re doing something wrong. You’re not. But policing is changing.”

Bulova continued, saying she remembered when Neighborhood Watch was first implemented and that now it’s an integral part of community law enforcement.

Supervisor Pat Herrity (R-Springfield) asked the committee to remember to keep the matrix of recommendations “in context” in terms of other public safety issues.

“Some things I think are important aren’t on this list,” he said. “Heroin and opioid addiction, elder abuse, Internet crime -- I hope we’re not pulling resources off those other things.”

Supervisor Penny Gross (D-Mason) went back to Corcoran’s comments, responding against the construct of right versus wrong versus grey. “It’s a matter of doing things differently,” she said. “Technology has changed things. That’s the troubling part. You can’t just flip a switch. It takes much longer.”

Supervisor Cathy Hudgins (D-Hunter Mill) added that “every good organization needs to re-look at itself, otherwise you won’t remain good.”

Carruthers said he thinks “great things came out” of the Ad Hoc Commission, of which he was also a member. But “as we go through this,” he said of the matrix of recommendations, “we need to be cautious and do this right.”

THOUGH A LARGER, more detailed event focused on Diversion First is scheduled for Thursday, Feb. 11 at the Merrifield Crisis Response Center of the Fairfax-Falls Church Community Services Board, representatives from the participating agencies gave a brief overview of the program.

One area of focus is the Sequential Intercept Model, explained Strategic Projects coordinator in the County Executive’s Office Laura Yager. The model breaks down the common places people first come in contact with police -- from out in the public, court hearings and magistrate’s office, jails and courts, and people re-entering society -- and how those with mental health challenges might be diverted in each setting.

Implementation of the program includes a three-year funding plan of $13.77 million, which Chairman Bulova said could be funded at least in part through grants rather than entirely on the County’s dime.

Fire and Rescue Chief Richard R. Bowers said the program is about making sure people who might otherwise go straight to the emergency room “get the right help they need.”

“They get caught in that spin cycle,” he continued, of being picked up during a mental health crisis, being taken to the hospital, being discharged, picked up again, etc. “We call them our most loyal customers. This program is going to break that cycle.”

More information about the Public Safety Committee meeting and links to the Ad Hoc recommendations matrix and presentation documents are available online at www.fairfaxcounty.gov/bosclerk/board-committees/meetings.