Board cites progress on Police Practices improvements, but some citizens demand more. 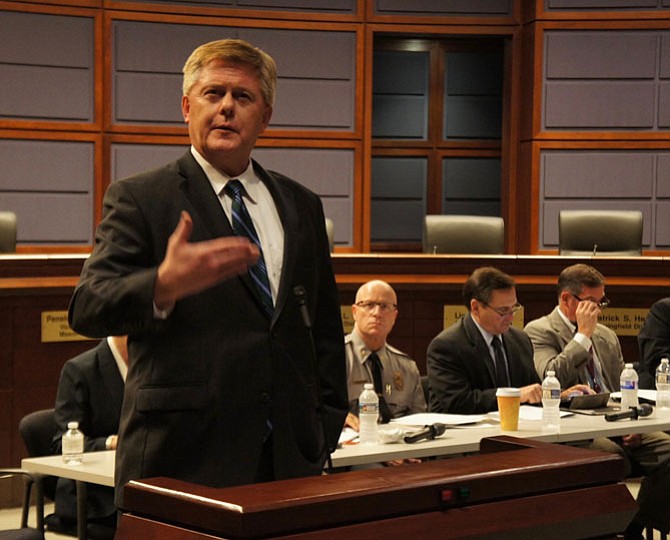 Caycee Utley of Fairfax stands amid protest signs and fellow members of Showing up for Racial Justice. The group doesn’t think any real progress has been made to “end racism and brutality, particularly against minorities” and hold law enforcement accountable for their actions.

George Becerra of Burke, who attends a number of public meetings concerning community issues, wants to know what county officials will do to change their outreach approach and increase attendance at important meetings and forums. “They can all get out the word at campaign time.”

John Lovaas admitted that he was a bit of a skeptic. Speaking at the May 22 meeting to update Fairfax County residents on the Ad Hoc Police Practices Review Commission’s recommendations, the Restonian acknowledged that he hadn’t been expecting all that much to come from the 32-member commission established by Board of Supervisors Chairman Sharon Bulova — in spite of the fact that Lovaas had actually been chosen as an alternate representative.

“But I am more and more impressed by what’s coming out of the implementation stage,” said Lovaas.

Lovaas may now be cautiously optimistic, but the meeting that highlighted progress, also subjected its panelists to criticism, shouts, protest signs, and a dose of expressed disbelief from many in the small, but vocal audience.

Bulova opened the session at the Government Center by announcing that the board had already approved and implemented or put in motion 172 of the 202 recommendations that the commission presented in its final report on Oct. 20, 2016. “I am proud … that in the first year 88 percent of the recommendations have been approved,” said Bulova, stressing that the board had taken the commission’s findings seriously, and worked in collaboration with the Sheriff’s Office, as well, to ensure the best possible results.

TWO NEW FORMS of independent oversight for the Fairfax County Police Department (FCPD) were established because of the Ad Hoc Commission. The supervisors recently named nine members — chosen from more than 140 applicants — to the Civilian Review Panel, to be chaired by Steel. In addition to the Review Panel, Schott has been named as the independent police auditor, to report directly to the Board of Supervisors.

The Civilian Panel will have the authority to review completed FCPD internal administrative investigations regarding civilian complaints against an officer. They may hold meetings to inform the public on how investigations were conducted. They may review complaints of harassment or discrimination, reckless endangerment of a detainee, or serious violations of Fairfax County or police procedures, and misuse of authority, as part of their duties.

The independent police auditor will handle the cases of police use-of-force that result in serious injury or death.

The Ad Hoc Commission, made up of private citizens and members of the law enforcement, legal, and academic communities, as well as members of the media and public relations arena, divided their review responsibilities into five categories: Use-of-force, independent oversight, mental health and crisis intervention training (CIT), communications, and diversity and recruiting.

Cook chairs the board’s Public Safety Committee, and had the task of bringing the recommendations to the committee and seeing that they were “worked through, not just rubber stamped one way or the other.”

The majority of the recommendations — 34 percent — came from the use-of-force sub-committee. Even though review of police practices had been on-going before, the impetus for the establishment of the Ad Hoc Commission itself came after the 2013 fatal shooting of John Geer of Springfield, by then Fairfax County Patrolman Adam Torres, while Geer stood unarmed in his own doorway.

After Geer’s death, with no information being made available to the public, several community groups formed and petitioned for reforms and more accountability from county law enforcement agencies. In early 2015 protests demanding “Justice for John Geer” were held outside police headquarters and the county government center.

The public did not learn the name of the officer involved in the shooting, or many of the relevant details until 17 months after the incident, when the information was released by a court order. The demand for more transparency did not fade away. In March of 2015, Bulova received the board’s support to create the Ad Hoc Commission with the mission to “review FCPD policies and practices related to critical incidents, use-of-force training policies, threat assessments, as well as those within the Internal Affairs Division.”

While insisting that avoiding any loss of life during police-public interaction had always been the guiding standard, at the meeting Cook said that one result of the commission’s efforts was a re-commitment to the “Sanctity of Life” philosophy. Cook referenced revisions made to FCPD policies. Last updated in 2013, revised General Order 540 on the subject of the use-of-force by county law enforcement personnel took effect on March 31 of this year. The order will be reviewed again in January of 2019, to determine its effectiveness and make any additional revisions if necessary.

Roessler also made mention of the revised policies, explaining that a number of policies had been consolidated into “one concise document” to clarify the appropriate actions to be taken while carrying out their duties, and the proper reporting required after the use of force by county police officers.

Roessler also praised the establishment of the Diversion First program, which is designed to divert persons with mental health issues and intellectual or developmental disabilities from detention to treatment wherever possible.

Since its launch in January of 2016, Diversion First has seen 375 individuals transferred for appropriate treatment options, instead of being arrested and detained for non-violent offenses.

To make Diversion First truly successful, Roessler said that law enforcement personnel had to be trained to handle citizens with these challenges. To that end, “de-escalation” training was begun for all FCPD officers last year.

WITH 52 ADVISEMENTS, the communications sub-committee of the commission came in second, targeting the transparency complaints and addressing the timeline gap between a use-of-force event and the public’s access to the details.

Roessler announced the establishment of a Public Affairs Bureau within the FCPD. The chief also mentioned pages on the FCPD’s website where information on use-of-force incidents are made available, including links to press conferences and briefings by Roessler and other officials.

Shirley Ginwright is the chair of the Fairfax County Communities of Trust Committee (COTC), a diverse citizen group “focused on strengthening and building positive relationships between public safety agencies and the communities they serve.” Since its inception in December, 2014, COTC has been looking for ways to connect law enforcement with the residents they serve. They have a particular interest in programs that focus on the county’s youth, and cutting off the “supply” of youngsters in the school-to-prison pipeline. Ginwright invited the audience to attend the COTC’s upcoming “Public Safety Day” on June 3 in Lorton.

Caycee Utley, lead organizer with Showing up for Racial Justice (SURJ) Northern Virginia, castigated all of the panelists over the death of 37-year-old Natasha McKenna, diagnosed with schizophrenia, bipolar disorder and depression from the age of 14. The 5’ 4,” 130-pound African-American McKenna, in custody at the Fairfax Adult Detention Center on an outstanding warrant for attacking a police officer, was tasered multiple times when sheriff’s deputies tried to put her in a wheeled restraint chair. At the time, McKenna was handcuffed behind her back, shackled around the legs with a bobble strap connecting the restraints, and had a spit mask placed over her face.

McKenna went into cardiac arrest shortly after being tasered. She was revived, but died five days later when it was determined that she had no brain activity, and life support was discontinued.

“Whose side are you on?” shouted several members of the SURJ group, waving their posters and pointing to an empty seat with a sign reading “Natasha McKenna” placed upon it.

“We don’t want to be on sides,” answered Cook.

The new police internal auditor, Schott, added, “This is what I have been hired to address.”

Both Roessler and Bulova tried to explain that the case of McKenna and some of the others being referenced by the SURJ supporters were not within their direct purview, citing that the Sheriff’s Office does not report to the Board of Supervisors.

“So nobody protects us from them?” Utley replied. “What pressures have you put on the sheriff?”

AT ONE POINT during the public comment phase, Cook refused to respond to “people yelling out of turn” and Bulova threatened to adjourn the meeting.

After Utley said, “There can’t be any trust until there is justice,” Bulova invited her to “talk personally” after the meeting.

Several of the citizen speakers described the Civilian Review Panel and the police auditor as “toothless” — lacking in the power to do anything. “Smoke and mirrors,” said Mary Tracy of Alexandria. “The county has a long way to go on this. What about body cams? The Department of Justice was offering $1 million grants, but we made no efforts to get them.”

Several of the panelists explained that the auditor is prohibited under Virginia Law from investigating or conducting interviews. Citizens responded that they were willing to help the board get those changes made at the General Assembly, “just show us what to do. Support us.”

Kofi Annan, president of the Fairfax NAACP, took a more conciliatory approach in his remarks, calling the work done so far “a good start,” but he challenged the county to look into the disparity in the treatment of blacks versus whites within the legal system and in detention. Annan called for measures to track such information and make it easily available to the public.

George Becerra of Burke, a community advocate and familiar face at public meetings on diverse issues around the county, asked a different kind of question of the panelists. He glanced around the large auditorium, then, pointing to the small numbers in attendance, Becerra asked “How will you change your outreach efforts?”

In response, Ginwright with Communities of Trust referred again to her organization’s Public Safety Days campaigns. After the meeting, Becerra expressed his disappointment with the answer. He acknowledged that citizens were equally responsible for informing themselves and in becoming engaged, but said that the information is often hard to find and overwhelming. With so many media relations personnel and staffers, Becerra thinks just a bit more of the work should fall on the county’s side of the fence.

“During campaigns, politicians find a way to bombard your email with information and requests for donations and support.” Becerra wants to know why something similar can’t be done for these important issues and meetings. “There’s maybe 40 people here tonight. Forty people out of a population of 1.1 million. That’s a lot of voices going unheard.”