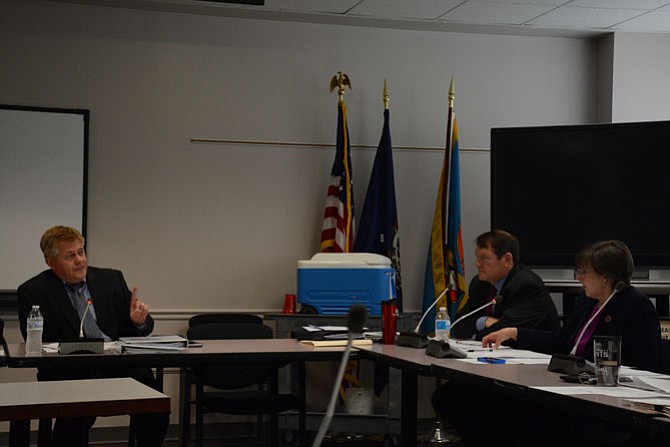 Lt. Brian Ruck explains how an officer’s trigger finger is meant to stay on the frame of the handgun and off the trigger until he or she is prepared to fire. 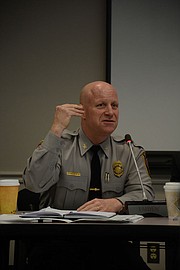 Chief of Police Edwin Roessler said the department is moving toward the goal of requiring every officer carry an Electronic Control Weapon or taser, a commission recommendation.

The Fairfax County Board of Supervisors is standing by its Chief of Police and his department.

The board’s Public Safety Committee met May 24 to discuss additional questions that lingered or developed following its May 10 meeting to review recommendations for updating and improving the ways Fairfax County Police handle use of force situations and communications.

At that meeting and this latest one, the supervisors reviewed language that will become an action item — along with a matrix of recommendations, estimated costs and implementation statuses from the Ad Hoc Police Practices Review Commission and Police Executive Research Forum — for the board to vote on on June 21.

Deputy County Executive and former Chief of Police David Rohrer said he’s working on converting the text. It should be ready for the board to review, prior to the vote, by June 7.

Supervisor Cathy Hudgins (D-Hunter Mill) began the discussion with a question from a constituent regarding how police are trained to aim guns at or around a person’s center mass.

“It’s all about angles, so I can see the offender,” Ruck said, while raising and lowering his arms slightly to differentiate between the specified positions.

Ruck also demonstrated how officers are taught to keep their trigger finger on the frame of the handgun and off the trigger until the moment they intent to fire at their target.

“They need to articulate an immediate threat, a reasonable threat,” he said.

Supervisor Kathy Smith (D-Sully) expressed concern that a pilot for body cameras on police officers might not move forward until next year: “I’d hate to see us wait that long to do deal with this.”

Supervisor Jeff McKay (D-Lee) said one of the concerns with not moving forward yet had been legislation in the Virginia General Assembly on body cameras. “We don’t know what the state’s going to do,” McKay said.

Supervisor Pat Herrity (R-Springfield) expanded that being on the “bleeding edge” versus “cutting edge” of the technology might not be in the county’s best interests.

Supervisor Penny Gross (D-Mason) acknowledged her rare agreement with Herrity in this instance. “We could be bleeding a lot of taxpayer money if we get ahead of the law,” Gross said.

Phillip Niedzielski-Eichner, chairman of the Ad Hoc commission Use of Force subcommittee, brought up the recommendation that every police officer be required to have an Electronic Control Weapon (or taser) on their person while on patrol. Currently it’s only optional, he said.

Chief of Police Edwin Roessler said the department is “moving toward that goal,” and confirmed that every officer certified to use the weapon may carry one at their discretion.

There was little additional conversation on tasers from the supervisors.

Merni Fitzgerald, chair of the Ad Hoc commission communications subcommittee, spoke about the need for a community engagement team as a formal way to make sure there’s “back and forth” exchange with the public and the police department.

Roessler responded that his department has recently applied for a Department of Justice grant that would help fund such a team.

Also during the communications discussion over release of information following an officer-involved incident, Smith said she was concerned about language for the action item. Roessler has said he needs up to 10 days following the incident to conduct a thorough threat assessment for the officer and his or her family.

The way the item reads, Smith said, the supervisors would be able to overturn that action by the chief and force the release of an officer’s name sooner.

“No one’s saying the board would overturn that,” Chairman Sharon Bulova said. But, she said, “the board needs to be given latitude to have a discussion.”

Supervisor John Cook (R-Braddock), chairman of the Public Safety Committee, expanded on Bulova’s comment. “The public needs to know it’s our job to come out of closed session, get in front of a camera and say it was the chief’s decision and we’re backing up the chief,” Cook said. “The chief had a recommendation, we were briefed on it. It’s a public obligation.”

The next meeting of the Public Safety Committee is scheduled for July 19.