Where the city’s tax increase is going.

For the City Council, that two-cent increase translates into $6.9 million in expenditures added during the council’s add/delete sessions. All of that funding is being directed into capital improvement projects. 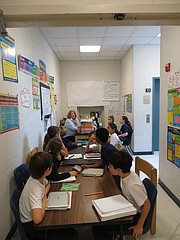 “A three-cent increase is painful, for sure, but the truth is it’s the only way we can keep up our facilities and keep offering services.”

The biggest addition to the capital project list is $3.4 million going towards the retrofit of a leased facility for an Alexandria City Public Schools (ACPS) Pre-School Center. The total project cost is $8.3 million, but the funding for FY 2017 is set at $3.1 million in capital cash, with the additional $5.2 million in bonds spread over several years. In FY 2017, the bond cost is roughly $300,000.

One third of the total FY 2017 CIP, excluding the self-contained Potomac Yard Metrorail station, is devoted to ACPS projects. The projects, like the pre-school center, aim to modernize aging facilities and help the school district deal with an overcrowding crisis. Jane Richardson, Early Childhood Special Education coordinator, explained that a central early childhood education facility would help the students access age appropriate programming. Richardson said that can be difficult to coordinate currently with various early childhood education programs spread across the school system.

The Pre-School Center would also have an effect on school overcrowding. Currently, the early childhood education programs take up larger classrooms than are needed for their smaller class size, while other classes are forced to take their lessons in hallways and auditoriums.

That bond cost for the ACPS Pre-School Center is the only debt immediately incurred by the add/deletes. Every other project is paid for with cash capital funding, or “pay-as-you-go” funding. Other major additions to the budget were $2.3 million for repair for the General District Courthouse and $1.4 million for additional DASH replacement buses.

“No one likes to increase taxes,” said Councilman Tim Lovain, “But these are capital investments.”

“A three-cent increase is painful, for sure,” Councilwoman Redella “Del” Pepper agreed, “but the truth is it’s the only way we can keep up our facilities and keep offering services.” 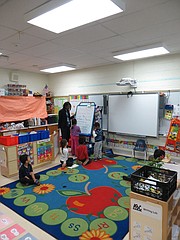 Councilman Justin Wilson noted two incidents that happened around the time of the budget approval that indicated the human cost of neglecting capital improvements: a bicycle crash on Duke Street that left one rider hospitalized and severe flooding at William Ramsay Elementary School that resulted in school closure on May 6. Wilson specifically noted that the cyclist crash further cemented the city’s need for a more comprehensive complete streets program. The cyclist, Ryan Brown, was struck by a car on Duke Street and suffered head trauma. Meanwhile at William Ramsay, Helen Lloyd, director of communications for ACPS, said an aging water pipe inside the building had burst and resulted in severe flooding that forced the school to remain closed on Friday and over the weekend.

Mayor Allison Silberberg said she pushed for the increase to stay at two cents or slightly higher.

“We have to look at what’s mission critical,” said Silberberg. “Those of us at City Council and in the School Board have to be careful stewards [of the city].”

Silberberg said she would have reduced the funding for the Courthouse renovations. The Courthouse and Health Department were the two lowest scoring buildings in an ongoing assessment of city facilities, so the Courthouse was the highest on the list for internal renovations. While Commonwealth’s Attorney Bryan Porter said his office has not been directly affected by issues with mold, the issues with mold and missing ceiling tiles on the building’s fourth floor were widely known.

It was the first budget session for Willie Bailey, first term city councilman, who said the biggest lesson from being up on the dais was that he could no longer solely focus on issues he had a personal interest in. Both Silberberg and Bailey said their biggest budget regret was the cut to fire hydrant maintenance. Typically the fire hydrant replacement works on a five-year cycle, costing $202,000. The city manager’s proposed budget cut that to $101,000 operating on a 10-year cycle. By adding in $17,720, the city was able to push that to roughly an 8-year cycle.

The operating additions in the budget were all funded through re-estimated revenues, a higher refuse fee, and a higher tobacco tax. Operating expenditures added during the add/delete process included $79,862 to extend library hours to 1 - 5 p.m. every Sunday afternoon, funding to begin studying the possibility of a Business Improvement District in Old Town for $25,000, and a handicap accessible door at City Hall for $10,200.