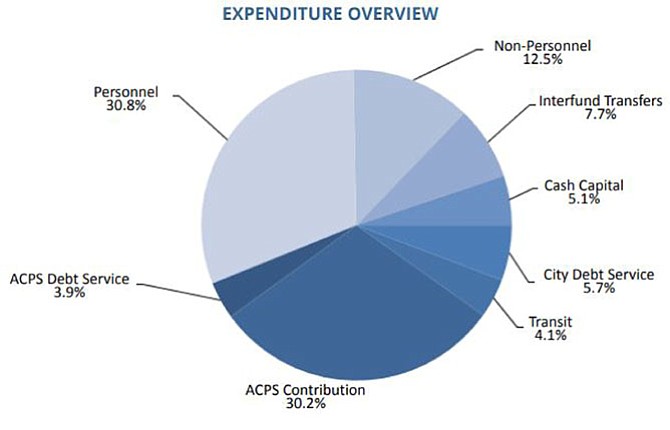 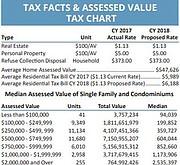 It’s not a great year for the budget, but it’s not the worst either. It’s the second slowest year of growth for the city’s economy in the last eight years, leaving the city with few options to expand services or promote new initiatives. But with some trimming back in city departments and prioritization of city goals, City Manager Mark Jinks’ budget proposed on Feb. 20 managed to fully fund the superintendent’s proposed budget and push forward a handful of new initiatives.

The main savings in the budget come from $4.3 million in operating budget reductions across city departments. According to Jinks, these reductions are mostly not reductions in services, but cutting overhead and finding efficiencies.

The total general fund operating budget is $742.3 million, a 1.9 percent increase over the current year. It’s modest growth, and 69 percent of the revenue growth is devoted to Alexandria City Public Schools, 22 percent to transit programs, and 7 percent to city operations. For the Capital Improvement Program budget, the FY 2019-2028 CIP budget is $2.14 billion, an increase of $26 million or 1 percent over the current CIP.

The budget proposes to keep the real estate tax rate at its current rate of $1.13 per $100 of assessed value. This would increase the average homeowner’s tax bill by 3.3 percent, or $199 per year, the lowest average dollar increase in six years. There are no other tax rate or reserve funding being used for ongoing operating expenses.

One of the few areas where there is moderate increase, however, is for the DASH Bus fare; from $1.60 to $175. The price of a monthly pass would increase from $40 to $45. This change would generate $212,000 in new revenue, while DASH would still remain cheaper than the bus systems in Arlington and Fairfax. New DASH programs initiatives in the budget include a discount for senior citizens riding DASH at off-peak hours and an expansion of the free ride program implemented this past year for T.C. Williams High School students to include private high school students. The King Street Trolley hours are also adjusting from opening at 10:30 a.m. on weekdays to 11 a.m.

The largest share of the city’s operating costs is employee salaries and benefits. A few changes are coming this year; including a $5 million merit increase for eligible employees, a $186,000 increase to the living wage paid to city employees from a minimum of $14.13 per hour to $15.

The single largest new cost in the budget is a $1.5 million set aside to address recruitment and retention capabilities for police, fire, and sheriff’s personnel in Alexandria. Jinks said this was a result of difficulties in the city attracting and retaining first responders, who have been leaving the city for more lucrative positions in neighboring jurisdictions.

The proposed budget also makes other improvements to the city’s emergency services. An additional computer forensics position is added to the Police Department to provide more timely analysis of electronic evidence, and $1.4 million is included in the CIP for the capital cost of the new Cameron Mills fire station. The budget also includes financing for the city’s first standalone Emergency Operations Center, a year-round facility designed to support interagency management in the event of large-scale emergencies. When not in use for emergencies, the space can be used for employee training.

The budget also outlined some of what is in store for Alexandria for the upcoming year. The budget includes funding for development site planning at the former Landmark Mall area, as well as redevelopment planning for Eisenhower East and plans to implement the Old Town North Small Area Plan.

The budget also puts forward funding towards the city’s goals of inclusivity. To improve job readiness, the budget includes $110,000 to fund training for adults for whom English is a second language.

Included in the budget is a $5 million investment in the CIP plan to continue building a citywide 40 gigabit-per-second fiber network. The project supports city and school technology needs while offering potential for broadband access in the future. According to Jinks, this is the second and final payment for a fiber network for the foreseeable future.

There are a few additions to the city’s parks and recreation in the budget, the largest being $432,000 for 2.75 full time positions and related programs and costs for the new Patrick Henry Recreation Center opening to the north of the redeveloped Patrick Henry school. With the planned demolition of the old Boat Club building, the budget also includes $25,000 for programming and $14,900 for maintenance at the interim Fitzgerald Square Park.

One of the most notable aspects of the budget is its full approval of the superintendent’s proposed budget, a first in recent history for Alexandria. The proposed budget includes a direct transfer to Alexandria City Public Schools [ACPS] of 30.2 percent of the General Fund budget, or $223.8 million; 69 percent of all new city revenue. The proposal includes funding for ACPS priorities related to increased enrollment, the new West End elementary school, employee compensation and textbook adoption.

Jinks credited the agreement to the work done in joint city-school work sessions, an initiative started this year out of heated arguments between city and schools over budget issues in previous years. Even with this new joint effort, the school budget wasn’t without its share of controversies. During School Board discussions surrounding the superintendent’s proposed budget, members of the board expressed reservations that the budget didn’t go far enough to address the school’s ongoing enrollment needs.

One of the final major topics in the city manager’s proposed budget discussion was city funding to back up its vow to implement Vision Zero. Vision Zero is a program aimed at eliminating traffic fatalities and serious injuries. In the FY 2019 budget, $639,000 is set aside towards Vision Zero initiatives.

The budget was presented to City Council at a special meeting on Feb. 20 to praise by the city councillors.

“It’s a miraculous budget,” said Councilman Timothy Lovain. “It’s almost hard to believe. It’s clearly hard work and competence from city manager on down, and all of the department heads and senior staff from each department willing to scrub their budget. It’s a great proposal, makes our work a lot easier.”

One question raised by the council was the lack of mention to Affordable Housing initiatives. Last year’s tax increase put forward by the City Council dedicated $3.6 million to affordable housing projects, including funding for the Church of the Resurrection project. Councilman Willie Bailey put forward the idea of a potential one-cent meal tax to fund affordable housing projects.

A public hearing for the budget will be held on March 12, with a work session and setting the maximum tax rate on March 14. Budget adoption is scheduled for May 3.

In the wake of the discussion throughout 2017 surrounding the proposed Business Improvement District, the proposed budget includes extensive improvements along King Street and the waterfront. According to Jinks, $175,000 is set aside in the budget for targeted marketing and special events in he King Street retail corridor, to be matched on a dollar-for-dollar basis by private sector funding. Patricia Washington, president and CEO of Visit Alexandria, said her organization is currently at work on securing private sector funding to support the expanded programming. The budget also includes $75,000 to support programing and related maintenance costs. Two additional city staff positions are funded to improve street and sidewalk cleaning, one of the main criticisms brought up during the BID discussions.

Though Fitzgerald Square Park is an interim holdover until a more permanent plan is put together for the site, Washington said plans are still in the works to make maximum use of the park.

Among the potential uses for the park, Washington said there was consideration of a temporary beer garden, or, confirming a long-running joke among Old Town residents about plans for the waterfront: a temporary ice skating rink.

The FY 2019 budget also begins preparations for a new tall ship to make its permanent home along Alexandria’s waterfront. The tall ship Providence, a 100-foot tall replica of the Continental Navy’s first ship captained by nautical legend John Paul Jones, will make its permanent home in Alexandria in summer, 2019. According to Washington, $400,000 is set aside for dredging and new pylons to be built on the waterfront, which is currently too small to accomodate the ship. Temporary visits from tall ships over the last few years, from Coast Guard cutters to Spanish galleons, have drawn tourists to Old Town. Washington said she expects the permanent residency of Alexandria’s own tall ship will provide a boon to the city tourism.

The largest portion of the Vision Zero funding, $375,000, is set aside towards funding Complete Streets projects — traffic improvements aimed at making roads safer and more accessible to pedestrians, motorists and cyclists. Yonn Lambert, director of Transportation and Environmental Services, said the push for Complete Streets was validated by recent successes on upper King Street. The street was narrowed to two lanes, with a bicycle lane added in each direction. In the first year of its implementation, Lambert said traffic crashes on upper King Street fell from seven to zero.