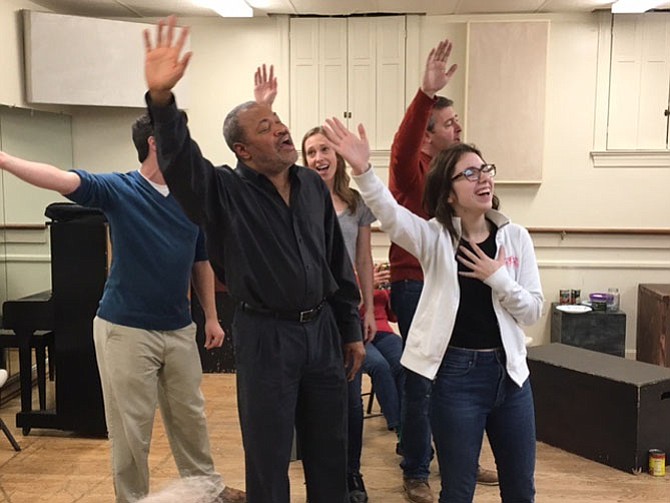 The Little Theatre of Alexandria is staging "Grey Gardens" from Jan. 16 to Feb. 6. Photo Contributed

The Little Theatre of Alexandria (LTA) is staging "Grey Gardens" from Jan. 16 to Feb. 6, 2016. Based on a true story and the 1975 cult documentary, it is an exploration of the American Dream gone wrong and what it means to become a social pariah.

Director Christopher Dykton said "Grey Gardens" is a chamber piece about the two Edies who were the aunt and cousin of Jackie Kennedy: Big Edie and her daughter Little Edie who created a scandal in the 1970s by living in squalor at their dilapidated Hampton estate known as Grey Gardens. The story focuses on the life of the characters in a couple moments in time. Dykton said exploring the heart of characters in unique situations and taking a good look at human nature has been an artistic focus for him lately.

"Sad, happy, touching, and brutal, 'Grey Gardens' deeply explores human nature and how our choices lead to who we are, what we become, and what we accept, especially as we grow older," said Dykton. "And it's a study of the relationship between a mother and a daughter, albeit a damaged relationship."

Presenting 'Grey Gardens' at two different points in time was quite a challenge, he said. "With the exception of the part of older Big Edie in Act 2, all other actors — there are eight of them: two women, four men, and two juvenile actresses — portray dual parts between the two acts. Of course, the biggest artistic challenge and perhaps the best female musical lead created to date in the 21st century is the role of Big Edie in Act 1 and Little Edie in Act 2. These characters are played by the same actress, which demands an actress of great skill," he said.

Co-producer Rachel Alberts said this musical has everything. "The first act is a fairly classic musical, in style and in tone. But the second act cracks that facade and we're really drawn in to the change. The two acts are so different and so powerful. I loved reading the script, so when I was asked to produce it, I couldn't say no. I wanted to be part of bringing this odd, quirky, powerful musical to life."

She added: "This play is a strange hybrid — part love story between a mother and a daughter and partly an exploration of the American Dream gone wrong and what it means to become a social pariah. The story blends humor, heartache and humanity. It's also based on a true story which makes it even more compelling."

She said the music is challenging, filled with four-part harmonies and odd tonal switches, but it's also incredibly beautiful and really serves to move the story forward. They had to find three actors (Big Edie, Little Edie, and Edith) who could act and sing and "become" one another. "It's pretty amazing what the script asks of these actresses, but they deliver. It took a lot of effort, and a lot of practice, but I think they nailed it," she added.

Nicky McDonnell plays Big Edie in Act 1 and Little Edie in Act 2. "In Act 1, we see Big and Little Edie on a splendid summer day in 1941 where their lives appear to be in full bloom and full of promise," she said. "Beneath that wealthy exterior, however, we see the subtle foreshadowing for where we find the mother and daughter in Act 2. This is arguably one of the great tales of riches to rags and an incredible study on how that affects the human condition. It also is a powerful window on how we as onlookers perceive a circumstance such as this from afar."

She added: "Both women are very bright, very fragile and very dependent on one another. Their actions, choices and desperation capture the imagination and the story takes us down a road less traveled."

Marshall Cesena plays two characters, Joe Kennedy Jr. and Jerry. "Joe is on the road to greatness, and Edie is going to help on that journey — he thinks. Jerry is a young, local handyman who stumbled onto the house one day and keeps coming back for the entertainment and companionship," he said.

For challenges, he said the show has a lot of highs and lows. "One minute your character is on top of the world, endless possibilities ahead, and the next he's fighting for his future, dreams ripped away," he said.

Dick Reed also plays two characters: Major Bouvier, father of Edith and grandfather of the other Edith as well as Jackie and Lee Bouvier in Act 1; and Norman Vincent Peale in Act 2. "The two are oddly similar in that each firmly believes that everyone holds the key to their own destiny," he said. "NVP expresses this in a song that parodies his mantra of the power of 'Positive Thinking,' 'Choose to Be Happy.' Major Bouvier does this in song, too ('Marry Well'), but also clearly states his disappointment in and total disgust with his daughter and her choices."

He said the biggest challenge for him was being strict toward his daughter. "Bouvier is a softie with his grandchildren even while instructing them how to live worthwhile lives. I have daughters and a grandson — each of whom I love dearly and enjoy even more — and while I did and do give them advice on life, I did not do as a [disciplinarian]. So I have nothing in my experience to bring to the character. And the women playing these roles are wonderful, which makes being harsh that much harder to do."

Penelope Gallagher plays the role of Lee Bouvier, the tomboy sister of Jackie, and a real princess. For challenges, she said, "In the show, I have to go from sad numbers to happy numbers constantly. Also, most of the actors are adults who have much more experience than I do. I'm just trying to learn as much as I can."

Joel Repress plays two different roles: Brooks Jr. and Brooks Sr. "The character Brooks Sr. is the glue in the first act. He keeps everything on schedule. He is aware of the issues between Big Edie and Little Edie, but knows his role," he said.

He added: "While my role is small it helps support the story, so maintaining focus and matching the intensity of the actresses who portray Little Edie in the first act and second act is important."