During Covid-19, the show will be seen through live acting, animation, and virtual reality. 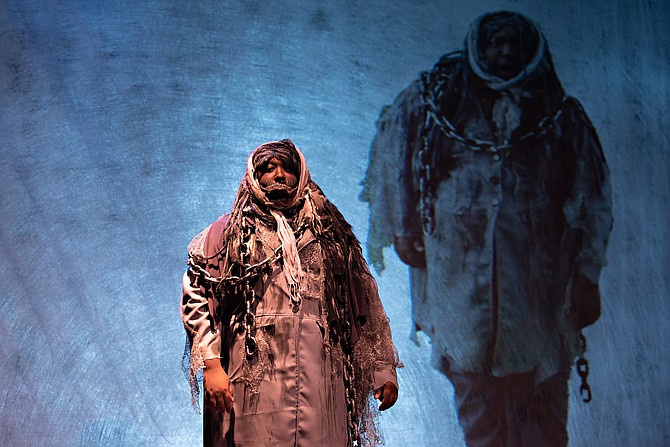 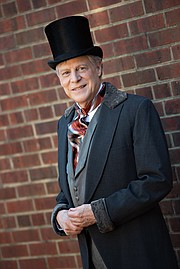 Continuing with its holiday tradition (with Covid-19 restrictions), the Little Theatre of Alexandria (LTA) is presenting Charles Dickens’ classic, “A Christmas Carol,” from Dec. 4-19, 2020 through live acting, animation, and virtual reality.

According to co-producer Ira Forstater: “I was eager to contribute to LTA’s goal of continuing live theatre during this challenging time in a way that ensures the health and safety of our patrons, actors, production crew, staff, and volunteers. The technical challenge we faced was how to bring this timeless play, an annual LTA tradition, to the stage within the restrictions required in response to the Covid-19 pandemic.”

Charlotte Corneliusen is the other producer.

Mike Baker Jr., ACC stage and film sequence director (as well as the Scrooge character), said he was able to get some talented actors to participate virtually who had concerns about Covid-19 and a few who were willing to do the 12 live performances. “Since this had never been done before on a live stage it was a brain teaser. I took it a step at a time — a month of Zoom rehearsals and one in-person rehearsal and we were off and running,” he said.

He said a huge green screen was brought in on Nov. 14 along with some lighting folks from “House of Cards” and “The Walking Dead.”

“Eight hours later, Dickens’ characters came to life, including some who have never been seen before — Ali Baba, Robinson Crusoe, Tiny Tim in the church, the Minister in the Graveyard and so on,” he said.

Peter Fannon, who plays the roles of Charles Dickens and The Gentleman, added: “It’s a real Christmas treat to be cast as Charles Dickens, who is also the narrator of this telling of his enduring story. Dickens was, from a very early age, a strong social reformer, and used his immensely popular novels, short stories and newspaper articles to illuminate the political and social changes he felt needed to stop Britain from ‘failing.’ He uses his story’s characters — including my other role as The Gentleman seeking alms — to humanize these needs. So, we’re trying to portray Dickens, the unmatched observer of human nature, as the passionate reformer, too.”

Dayna Wade, who plays the Ghost of Christmas Present, Caroline, and the waif, added: “Christmas Present has come to Scrooge as a teacher of sorts. She is his second spirit visitor and is a true representation of the holiday spirit and all it has to offer. Her presence allows Scrooge an opportunity to see what his actions have manifested for the people around him, and she is warning him. My director called her the jolly prosecutor — I love that! I also think about her as a very bold Mother Earth. She is intentional about her teachings and is confident in who she is and all that she represents.”

Sidney Davis, who plays the role of Jacob Marley, added: “One of the main challenges was rehearsing in our new format on Zoom. As a former dancer and pretty physical actor, I found it extremely difficult when reading the scenes with the company, not to get on my feet and really ‘feel’ the character in my bones. I imagine once I get into the rehearsal room or onstage it will be a shock to my body (especially since Marley has to carry heavy iron chains onstage). But, realizing that this might be the future of theater, and the way that most if not all companies will be rehearsing, it felt good to just be doing theater again.”

Larry Grey, who plays the role of Fezziwig, added: “Bringing this character to life has always been fun and somewhat challenging. He is loud, colorful, over the top. I am grateful to the costumers and makeup crew who help in that respect. He dresses flamboyantly and fun. It adds to his jovial character.”

He added: “Charles Dickens’ ‘A Christmas Carol’ is the story of the redemption of the human soul …. When it was first published, it sold so fast and became so popular the stores could not keep it on the shelves. It was credited for reinventing and reviving Old Christmas traditions in England, which had become dark and oppressive in the extremely harsh poverty of the industrial age.”

Patrick Mahoney, who plays the roles of Fred Scrooge, Ghost of Christmas Future, and Robinson Crusoe, added: “This hybrid stage-film technique is a new and exciting medium, and one that offers the new generation of actors a unique challenge. When no one is giving you your cue lines, you are your own supporting actor. This can be a blessing or a curse. But as an up-and-coming actor, I revel in any opportunity for a challenge. Overcoming these roadblocks is how we grow as performers.”

Tickets to “A Christmas Carol” are $20 per person. There will be 12 performances of this play, and audiences will be limited to a maximum of 46 people. Seating will be arranged in sets of 2 or 3 seats, with the ticket price based on the number of patrons (1, 2 or 3) attending. Only members of the same household may sit together in adjoining seats. The theatre plans to stream it for those who can't come see it in person. For details, visit http://thelittletheatre.com/.