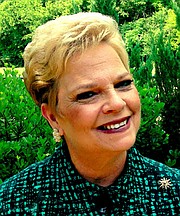 Peggy Wallace Kennedy, daughter of former Alabama governor and segregationist George Wallace, is the keynote speaker for the McLean Community Center’s annual Martin Luther King Jr. Day Celebration. Kennedy will give a talk, “A Walk to Redemption,” on the life experiences that led her to become a civil rights advocate. The celebration will be held at 2 p.m. on Sunday, Jan. 17, in The Alden Theatre, 1234 Ingleside Avenue. Tickets are $20 for the general public and $10 for MCC tax district residents.

Born into one of the most powerful and controversial families in the history of the state of Alabama and the South, Kennedy now stands apart from her past as one of America’s most important voices for peace and reconciliation. She shares memories from her childhood years living behind the gates of the Alabama Governor’s mansion as her father, Governor George C. Wallace, became an international figure for his “stand in the schoolhouse door.” In addition, she will speak on the challenges she faced in her journey to create a new and different legacy for herself and her two sons. Kennedy demonstrates best the notion that none of us can be responsible for the circumstances of our birth, but all of us will be held accountable for who we will become.