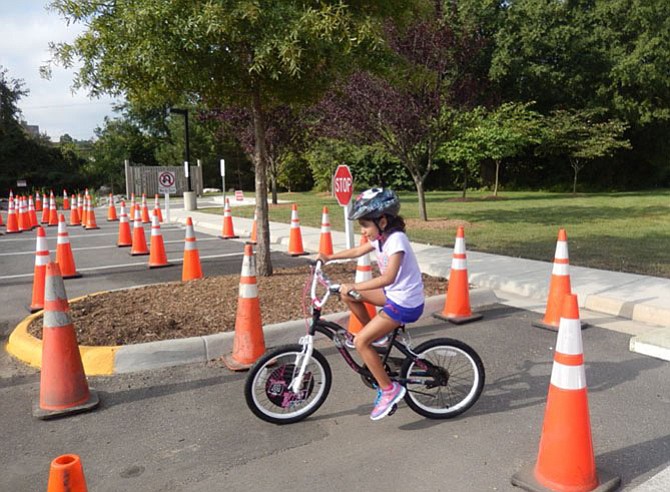 Liliana Silva, who attends St. Leo the Great Catholic School, bicycles through the safety-cone course at a Kids’ Safety Day held by the City of Fairfax Police Department. Photo by Bonnie Hobbs. 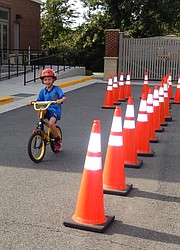 Virginia code allows any county, city or town to mandate that bicycle riders ages 14 and younger wear protective helmets. So when a City of Fairfax resident saw children in his neighborhood riding on a public street without helmets, he was concerned.

He called City Mayor Scott Silverthorne and asked why Fairfax did not have a bike-helmet ordinance like other, Northern Virginia jurisdictions. So Silverthorne had Police Chief Carl Pardiny look into the matter and then brief the Council on his findings.

Pardiny did so last Tuesday night during the Council’s Jan. 5 work session. He spoke about the importance of children’s bicycle safety, the state’s enabling legislation and the pros and cons of adopting a helmet ordinance.

“It’s the single, most-important piece of equipment a bicycle rider can have.”

“Bicycling is a great exercise and I’ve been cycling for years,” he said. “I started the City’s first police bike-patrol program in the early ’90s, and I know firsthand the importance of a bike helmet. It’s the single, most-important piece of equipment a bicycle rider can have.”

Pardiny then presented several bike-safety facts from the Centers for Disease Control and Insurance Institute for Highway Safety. He said an estimated 66.9 million Americans ride bicycles and about 29 percent of U.S. households contain one or more bicyclists.

IN 2013, there were an estimated 520,000 emergency-department visits due to bicycle-related injuries, and half – or about 257,000 of them – involved youth under 20. And annually, some 26,000 bike-related injuries to children involve a traumatic brain injury.

Furthermore, head injuries account for 62 percent of bicycle-related deaths in all age groups. But the risk of a traumatic brain injury increases significantly when helmets are not worn. And even minor head injuries can lead to “post-concussional syndrome,” including persistent neurological symptoms and headaches.

Meanwhile, helmet use has been estimated to reduce head injury by 80 percent and the odds of head, face or neck injury by 33 percent. And child bicycle-related fatalities have decreased 54 percent since 1999.

In 1993, Virginia adopted the enabling legislation paving the way for the creation of bike-helmet ordinances throughout the state. Once placed into law, violations are punishable by a $25 fine. But the fines are suspended for first-time violators and for those who purchase helmets meeting Consumer Product Commission safety standards before their fines are actually imposed.

If enacted by the City, the ordinance would be enforceable on any highway, sidewalk or public bicycle path. And – when necessary and when funding allows – the Police Department will provide free helmets to City residents who can’t afford them for their children.

Pardiny noted that some 24 jurisdictions across the commonwealth – including the Town of Vienna, the counties of Fairfax, Arlington and Prince William and the cities of Alexandria, Manassas, Falls Church and Manassas Park – have already adopted a bike-helmet ordinance.

He also said that, in the past 10 years, there have been two, reportable, child bike-related, traffic accidents in the City of Fairfax. One was in 2008, and the other, in 2009, and both time, the bicyclist was found to be at fault. One was wearing a helmet and one wasn’t, and both were taken by ambulance for treatment.

Pardiny said the disadvantages of a helmet ordinance could be a helmet’s cost, citations could be issued to children, some parents may object and it “could put police officers in an adversarial role with parents.” Regarding the cost, though, he said, “We can give helmets out for free to families who can’t afford them.”

An ordinance’s advantages, he said, are that helmets save lives and prevent injury, eliminate peer pressure, increase bicyclists’ visibility to drivers and would align the City with other jurisdictions in the region. “It could also increase helmet use,” added Pardiny.

He said the Police Department already holds events to teach children bike safety and make sure they’re wearing properly fitted helmets. Basically, said Pardiny, “We’re hoping to keep kids safe, whether through an ordinance or through continued outreach and education. I’d recommend adoption of an ordinance, in conjunction with our continuing education.”

“One life potentially saved makes it worth it for me,” said Silverthorne. “And there are various organizations that offer free helmets. So I think it’s a no-brainer. I think it’s important that we send a positive message to the community that we care about kids’ safety.”

“I concur,” said Councilman David Meyer. “This isn’t punitive and it’s aimed at children’s safety. Some bicycles today are different than those from long ago because gear ratios can allow them to reach higher speeds faster. And there are more cars on the roads today, so there’s a need for greater bicycle safety.”

“Parents set the example, like when putting on a seatbelt,” he continued. “And if this is done, we’ll see less accidents and injuries. So I think a lot of positive results can come from this ordinance.”

Councilwoman Ellie Schmidt asked, “If citations have to be issued, would they go to parents or children?”

“In the event of repeated noncompliance, it would have to go to the child,” replied Pardiny. “But if a helmet is purchased prior to the case going before a judge, the fine would be waived.”

“Would you talk to the parents about the law?” asked Councilman Jeff Greenfield.

“Absolutely,” said Pardiny. “That would be part of our educational campaign before we’d take any punitive action. And we’ve uncovered no problems with the ordinance in other jurisdictions.”

However, Greenfield also worried about children “being afraid of law-enforcement officers because of this ordinance. So I want [officers] to be more focused on child safety-education and talking to parents before pulling out the ticket book.”

Councilwoman Janice Miller said that, usually, younger children wear their helmets because their parents make them, “but those 15 years and up don’t.”

PARDINY said it is always nice to have something “to back you up, if education doesn’t work. The ordinance only covers children 14 and under. And studies indicate that, the younger a child begins to wear a helmet, the more likely he is to continue doing so into his teens and adulthood.”

“I’m concerned about tickets written to children,” said Councilwoman Nancy Loftus. “Could we adopt it without any penalty, at all? We could just tell them wearing a helmet is a law in the City.” Pardiny said he’d have to consult with the City attorney.

And, added Loftus, “The word ‘purchase’ should be replaced by the word ‘acquire’ for those who get a helmet before their case goes to court.”

“I like that, too,” said Silverthorne. “We do have a City program that provides free helmets to children who need them.” The matter will go before the Council at a later date for official action.