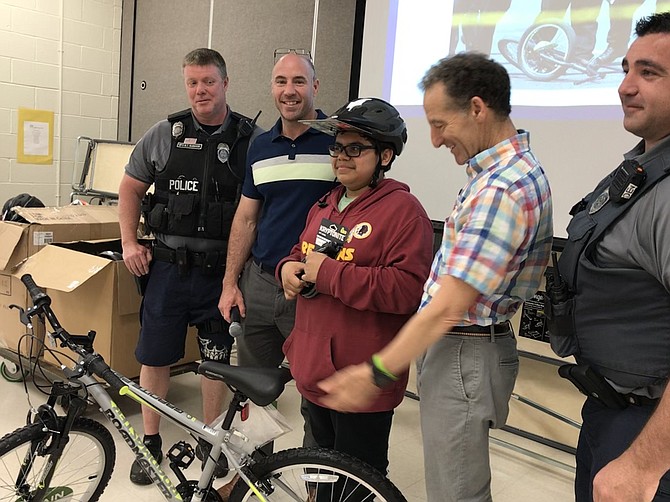 Attorney and avid cyclist Doug Landau of the Herndon law firm Abrams Landau, Ltd. wants to save as many children as possible from traumatic brain injury due to cycling and skateboarding accidents. On May 22, he took his "Lids on Kids” program, designed to put bicycle helmets on children who don't have them, back to Hutchison Elementary School in Herndon. He did so this year but with a twist. For fifth and sixth-grade students to receive one of the free helmets, a parent or adult guardian had to sign a pledge. "So we know the family will be invested in bicycle safety," said Landau.

Held after school in the Hutchison cafeteria, children and parents learned basic safety rules, the importance of wearing a bicycle helmet every time they ride whether on a bike or skateboard and what could happen to their brains if they were in an accident without one. "Your brain cannot be replaced," said Landau. He explained that when a rider is in an accident and treated for bleeding inside the skull, the brain swells and pushes against it with nowhere to go. Wearing a properly fitted and non-damaged helmet cuts the risk of severe traumatic brain injury by 90 percent, according to Landau. He told the students and parents that if one of his helmets, each with a special sticker inside, is ever damaged due to an accident, bring it to the law office for a free replacement helmet.

Attorney Landau gifted the bicycle helmets, compliments of the Herndon law firm and Virginia Trial Lawyers Foundation, to the children with the help of his team, school staff and Fairfax County Police officers from the Reston District Station, MPO B.T. McMahon and PFC D. Rocco.

"I fell off my bike,” said PFC D. Rocco. "A helmet is very important.“ Afterward, Landau held a drawing for a new bike, won by Jorge Arce, 12. "I like it," said Arce excitedly. "It has lights, and I'll be safe at night.” Asked if he'd wear his new helmet, Arce quickly responded, "Oh, yes."

According to the "Lids on Kids" Team, for children who did not have a signed bike pledge and did not receive a helmet that day, any parent/guardian and child could stop at the law office, 797 Center Street in Herndon and the "Lids on Kids” team would provide one.