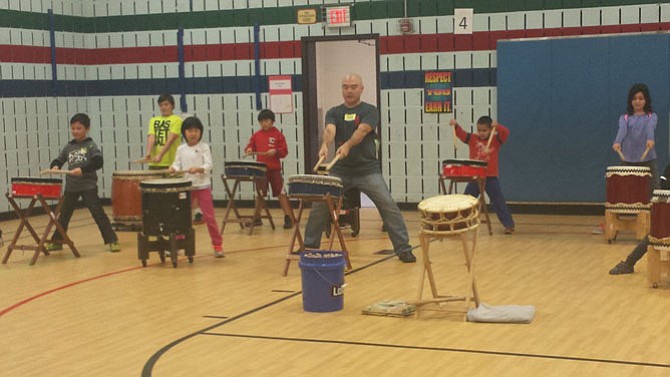 Instructor Mark Rooney, center, shows students how to play taiko. The opportunity was made possible through a grant from the Japan Foundation, which teachers at Fox Mill applied to back in June 2015. The afterschool session took place in late November 2015. Photos by Marissa Beale/The Connection

Sixty students at Fox Mill were selected from a lottery for an after-school taiko lesson taught by a guest instructor. 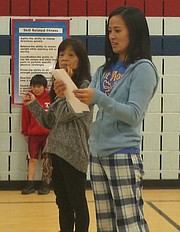 From left -- Japanese Immersion teachers Nahoko Nakayama and Yoko Linam prove instructions and an introduction to participating in the afterschool taiko lesson.

At Fox Mill Elementary School students not only learn the Japanese language, but also gain exposure to Japan’s culture.

Through a grant opportunity made possible by the Japan Commerce Association of Washington, D.C., Fox Mill secured funds to bring taiko instructor and performer, Mark Rooney, to the school to host a school-wide assembly and after-school class for students.

“Students are very excited to participate in the program,” said Japanese Immersion (JI) teacher Yoko Linam. “There were 140 requests for the after-school drumming. A lucky 60 were chosen.”

The 60 students, separated into two groups of 30, participated in after-school classes that were taught on separate days. Sitting in a row in the school’s gymnasium, students from kindergarten to sixth grade listened quietly as Rooney explained the rules for playing the taiko drums. Both JI and non-JI students at the school had chances to participate. In total, 40 percent of students are involved in the JI Program.

“We are trying to showcase [the program’s] importance,” said Linam. “We are on the list of proposed cuts due to the budget, but parents are working hard to save the program.”

“I wanted an immersion program and I’m really upset that the JI Program is at risk,” said Nellie Scrapper, a mother of two sons in first grade at Fox Mill. “My mom speaks five languages and I speak three. We bought our house [here] because of the schools and the immersion program.”

Other parents, see the program as a nice addition, but do not view it as integral to what their child needs to know. One parent expressed that removing the program would not be the same as altering a core subject such as math or social studies.

“I started at Fox Mill in 1991 and I hear from former students who have continued their studies in high school, college and beyond,” said Nahoko Nakayama, who has been a JI teacher at Fox Mill since 1991. “A group of former students even opened a company in Tokyo. Because of this program, there are three or four private schools in Japan with English immersion programs.”

For more information about the World Languages Program, visit fcps.edu.