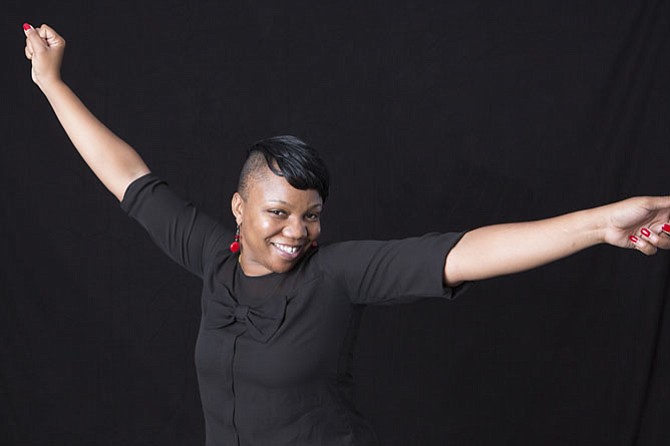 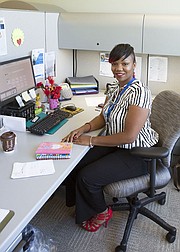 Nyrisha Beckman at her desk.

A tall, striking figure in red, Nyrisha Beckman stands in front of a room of recent Fairfax County high school graduates; not as a cautionary tale, but rather a true inspiration.

Her journey has been one of unrelenting perseverance--of getting knocked down and picking herself up, of being her own cheerleader. Today, despite many obstacles, the home she owns with her fiancé displays a wall of degrees including an associate’s, a bachelor’s and a master’s. Shortly, a second master’s will join the others.

Beckman wants these high school graduates, who are Fairfax County foster care alumni, to know that they can do it too. Quoting one of her favorite poems, Beckman tells them, “Rest if you must, but don’t you quit.”

And that determination was the example set by her older sister, Taneka, who says, “We couldn’t help how we were brought up. It was on each of us whether, as adults, we were going to be a success or a failure.“

Placed in foster care for the first time at age 6, Beckman lived in two different foster homes before returning to her mother’s home where she lived for the next few years.

About to start sixth grade, social services intervened again and she and her five underage sisters were removed from their mother’s household for good. Beckman and three of the sisters were taken in by an aunt. Beckman was grateful to be placed with a family member and to have her sisters for support.

But for children living a precarious childhood, there are often no adults to confide in and when things went south at her aunt’s, “We were afraid to go to the social worker. We stayed there until things got so bad that we ran away,” she said. By that time, she was a 10th grader.

RUNNING AWAY did get her removed from her aunt’s house, but being split up from her sisters and living in four different foster homes over the next three years wasn’t easy. “You were on eggshells in someone else’s house. You never felt like you were part of that family,“ she said.

Educational success can be elusive for children who spend time in foster care. "Children often have many moves from foster home to foster home," said Marilyn Durbin, LCSW, BCD of Centreville and 25-year veteran of Fairfax County Foster Care and Adoption caseworker and supervisor.

"This can result in changing schools. With the educational disruptions, the trauma of moving and the trauma of the abuse and/or neglect that brought them into the system in the first place, learning can be difficult and sometimes impossible."

A recent study commissioned by the state of Virginia found that children who aged out of foster care were 37 percent less likely to have earned a high school diploma than their counterparts who were not in care.

Beckman and her siblings had an uncle who somehow managed to instill in them the idea that education was the key to success. Even with all of the turmoil and diagnoses of ADD/ADHD and learning disabled, Beckman didn’t drop out of high school.

When she graduated, several of her older siblings were setting a good example by pursuing higher education. This sets the Beckman siblings apart. Fewer than two percent of foster care alumni earn a college degree by age 25, compared to 28 percent of all 25-year-olds, according to the Chapin Hall Midwest study.

Nyrisha Beckman with her son Bryant.

WHEN BECKMAN began her freshman year at The State University of New York at Buffalo, in the city where she had grown up, she was 18. Having aged out of foster care, she was on her own without the safety net and support that parents often provide.

Beckman found herself far behind the rest of her classmates academically. She struggled to keep up while working to ensure she had a roof over her head and food to eat. Going to school also meant less time to hang out with her friends. It was too much. She dropped out after her freshman year.

With few options, Beckman joined the Army National Guard where she served for four years as a chemical specialist.

By 2003, she had fulfilled her military commitment and was juggling motherhood with several jobs in an effort to support their little family.

“My inspiration was my son,” Beckman said, “I was working two – three jobs to support us. I knew I wanted Bryant to have a life where he had choices. To give him that, I needed to go back to college.”

But her plans were derailed when her application to return to the University at Buffalo was not accepted.

Instead of crumbling under the rejection, Beckman pressed on: “‘Cannot’ is simply not in my vocabulary.” She was determined not to let obstacles of money, childcare and academic challenges keep her from succeeding. She got out a piece of paper and starting writing down her goals.

With college at the top of her list, she matriculated at Erie Community College. Unable to afford evening childcare, Beckman brought her baby son with her to class. As a result, some of Bryant’s earliest memories are of classrooms with just one window and the single sheet of paper he had to entertain himself.

DESPITE THE SETBACKS, Beckman continued to push forward to achieve her goals. “That seed, planted by her uncle, might have been what it took to help instill the resiliency she needed to fight to return to college,” said Jackie Stout, a licensed clinical social worker specializing in the treatment of trauma and childhood issues using EMDR therapy.

Two years later when she re-applied to the University at Buffalo, Beckman was armed with an associates degree from Erie Community College in business administration and a 3.5 grade point average.

Acceptance back into the University at Buffalo meant continuing to juggle a full-time job with motherhood and her full course load, Beckman remembers how supportive her professors were, even entertaining young Bryant while she took exams.

When she accepted her bachelor of arts, she was ready to start working toward her next goal. The university had awarded her with a full-ride scholarship to complete a master’s in Rehabilitation Counseling.

Daniel J. Smith, adjunct professor, Graduate School of Education remembers Beckman from those days, “She wasn’t writing or researching on a graduate level [when she started]. But she went back and forth with me on her papers, accepting criticism and not giving up until she felt she had done her best. By the end of her third class with me, she was writing in the top 30 percent.” And today, he said, “her writing is Ph.D. level.”

Smith didn’t know prior to being interviewed for this article that Beckman had had a difficult childhood. He said, “I wish I had known, I wouldn’t have been so hard on her.” But then thought better of it. He shouldn’t have expected less of her than she expected from herself, and that is to be the very best that she can be.

In 2013, Beckman earned her masters degree in rehabilitation counseling. She says that over the thousands who came to celebrate the graduates, she could hear her then 11-year-old son cheering for her. Bryant remembers that day too; both his pride in his mother and how loudly he screamed “MOOOOOM!” when she accepted her diploma.

In addition to raising her son and merging their duo with her fiancé and his daughter, London, she is working on her second master’s, works full-time during the week and has a part-time job on weekends. “[Nyrisha’s] heart is as big as the world,” her fiancé, Aaron Hall, said.

HER WILLINGNESS to help others without judgment is key to her success as an employment/workforce specialist for Linden Resources, Inc. Beckman is deployed to Fairfax County and works at the Merrifield Behavioral Health Outpatient Program.

“Her success in matching clients with employment is more than double the average. That’s unheard of,” said Lori Bell, Mental Health manager and Beckman’s direct supervisor. “She is a superstar and ignites everyone around her to strive to be the same.”

Director of Adult Behavioral Health Outpatient Programming at Merrifield LaVurne Williams can’t say enough about Beckman’s impact. “You can’t be in the same building with Nyrisha and not meet her. Her personality is that magnetizing. Nyrisha works with clients with struggles that contribute to difficulties finding and keeping employment. Without jobs, they are unable to obtain housing and meet the basic needs of themselves and their families. She works tirelessly to figure out creative ways connect her clients with jobs. She changes the lives of everyone around her.”

Beckman says she uses her own experiences to help her clients.

“You can’t take care of yourself without employment and education. I can set an example. If I can do it, they can too.”

Friends, classmates, colleagues and supervisors confirm the value of Beckman.

“Everyone wants to be around her,” said Teresa Zutter, director of Education at First Star Greater Washington Academy, where Beckman volunteers.

“She has a ‘pull yourself up by your bootstraps’ attitude which she uses to encourage others,” said Chauncey Strong, Chapter Liaison, Foster Care Alumni of America.

“She has shown me that whatever you want to do in life, you can do, just stick with it,” said Lillian Imes Gates, a childhood friend.

“She is a go-getter, a very impressive self starter,” said Liesa Snodgrass, internship clinical supervisor.

Aaron and London Hall with Bryant and Nyrisha Beckman.

Beckman, reflecting on how she juggles a family, full and part-time work and her many volunteer commitments, posits that even the ADHD may have helped her along the way, “Maybe it’s that hyperactivity that allows me to juggle and accomplish so many things,” she said with a smile.

She is sympathetic to the people who failed her during her childhood. Her parents, a mother with a seventh-grade education and an untreated mental illness and a father who struggled with drug addiction, did the best they could, she says. Relatives and foster parents who failed her, were not properly trained.

Every day, Beckman wears something red. To her, it is the color of energy and it helps to fuel her drive. It is also her mother’s favorite color, she notes.

Despite all of her success, Beckman is wistful when she talks of her one stuffed animal, long ago lost in one of those many childhood moves and of the pictures of her childhood never taken. She is unwavering in her resolve that Bryant and London’s childhoods be different, with mementoes kept safe and memories captured in pictures.

Now 36-years-old, Beckman doesn’t waste a single minute, setting an example every day as to what it is to be a victor, instead of a victim.