Don Flattery’s son suffered an OxyContin addiction, died at 26 from an overdose. 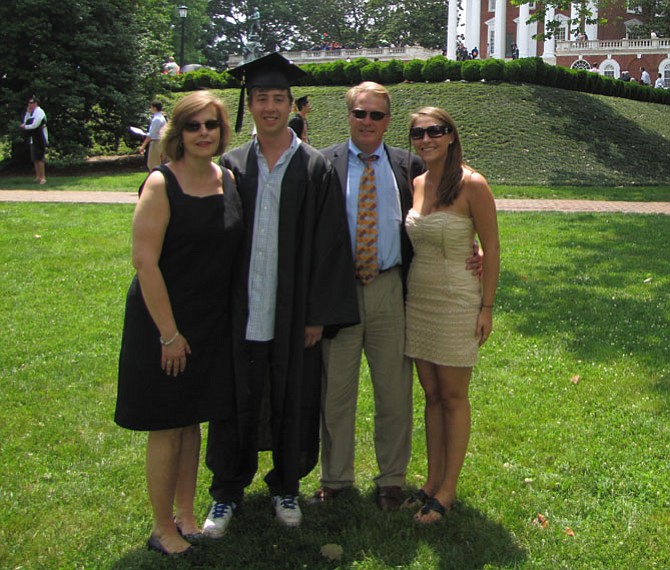 The Flattery family (from left) of wife Priscilla, Kevin, Don and daughter Kara attends Kevin’s graduation from the University of Virginia on May 23, 2010. Photo courtesy of Don Flattery

Kevin Flattery had everything before him. A 2010 graduate of the University of Virginia, he had moved to Los Angeles after college and was starting a career in the film industry. “He was doing everything he wanted,” said Kevin’s father Don Flattery.

Kevin Flattery was an aspiring filmmaker who struggled with anxiety, stress and depression, and died at 26 from an opioid overdose in 2014.

As Kevin Flattery moved through a series of high-stress, low-paying jobs trying to make his way, he started to struggle with anxiety and depression. His parents helped get him therapy, but Kevin Flattery also began to self-medicate with the opioid prescription drug OxyContin, a narcotic pain-reliever.

“They’re everywhere, not hard to find,” Don Flattery said. “They do have a soothing effect; they affect the limbic region of the brain and can help with stress, but over time you build a tolerance and need more to have the same calming effect.”

Kevin Flattery came home to Virginia in 2013 for intensive outpatient treatment for addiction in the Inova hospital program. When he was offered a job with a film company in New York, Kevin Flattery halted his treatment at Inova and got help from a substitute program in Manhattan. That was unsuccessful, Don Flattery said, so his son returned to northern Virginia. Kevin Flattery died from an overdose on Aug. 30, 2014.

“In my son’s case, he wasn’t a 15-year-old, surrendering his youth, ingesting every substance known to man,” Don Flattery said. “He came to his addiction as an adult.”

Photo courtesy of the Office of Sen. Tim Kaine (D)

U.S. Sen. Tim Kaine (D) (left) invited opioid control advocate Don Flattery (right) of the Mount Vernon area to be his guest at the 2016 State of the Union address.

As parents, Don and his wife Priscilla didn’t know where else to look for help about their son’s addiction. “We were on our own,” Don Flattery said.

As Don Flattery sought to educate himself on the effects of opioid prescription pain medications like the ones his son was addicted to, he unraveled a larger problem, a public health epidemic.

“Overuse of prescription opioids has resulted in massive amounts of these drugs available in our communities, workplaces, schools and medicine cabinets,” Don Flattery said. “As a result, they’re widely available to be used non-medically, or abused, and medically, over prescribed and over used. Both are pathway contributors to the current opioid addiction epidemic.”

“It isn’t just a matter of young people,” Don Flattery said. “It strikes people from all backgrounds and age groups as well.”

Don Flattery retired after 37 years as a federal manager and dedicated himself to becoming an advocate and policy advisor. Gov. Terry McAuliffe (D) appointed him to the Governor’s Task Force on Prescription Drug and Heroin Abuse, and he advises the FED UP Coalition and Physicians for Responsible Opioid Prescribing.

“Don has been especially effective because he had experience as a high-ranking official for the Environmental Protection Agency,” said Dr. Andrew Kolodny, M.D., chief medical officer for New York City-based alcohol and drug rehabilitation center Phoenix House, and an advocate with FED UP Coalition. “He understands how federal agencies work and knows his way around Capitol Hill. He’s also just very bright, and understands the key drivers of the problem. He’s very articulate and that makes him a very powerful advocate.”

According to the CDC, over 259 million prescriptions for opioid painkillers were written in the United States in 2013, including 30, 60 and 90-day prescriptions.

Photo courtesy of the Office of Sen. Tim Kaine (D)

Don Flattery (left) met with U.S. Sen. Tim Kaine (D) in his legislative office prior to the State of the Union address on Jan. 12.

From 1997 to 2011 there was a 900 percent increase in opioid prescriptions, according to Kolodny. “That’s what’s driving this crisis,” he said.

“There’s been a coincidental increase in addiction and overdose deaths,” Don Flattery said. “There’s no question there’s an immutable nexus between overprescription and the overdoses and mortality.”

In the most recent year for data, there were 25,000 opioid overdose deaths in the United States. About two-thirds were from prescription narcotics, one-third were from heroin. The two are molecular cousins, both derived from the poppy plant.

In Don Flattery’s work as an advocate, he uses his son to personalize what can otherwise be a “really clinical issue.”

“However painful, I keep telling my son’s story,” Don Flattery said. “It’s not unlike the way the public grasped the seriousness of the HIV Aids epidemic. Only when there was the AIDS quilt, they took it city to city, that showed faces of individuals, did it really strike the public, strike a chord. These are tragic lives lost forever. It’s kind of what needs to happen with this issue.”

Don Flattery also gained the attention of U.S. Sen. Tim Kaine (D), who invited him to be his guest at the Jan. 12 State of the Union address.

“He’s been so courageous in talking about his son’s death,” Kaine said, “spending time talking on The Hill in congressional offices.”

Kaine has also taken up the issue of opioid overprescription, introducing or sponsoring the Co-Prescribing Saves Lives Act, the FDA Accountability Act and the Stopping Medication Abuse and Protecting Seniors Act.

“Having Don was just a way to highlight the issue, but also honor Don,” Kaine said. “That his painful experience could be a source of hope and education for others.”

President Barack Obama briefly remarked on the overprescription-addiction epidemic near the beginning of his final State of the Union.

“The advocacy world was alight,” Don Flattery said. He’s hoping to use Obama’s mention of the public health crisis as “a launching point for public awareness.”

For more information available from Fairfax County on opiate and heroin, for emergencies and resources, visit www.fairfaxcounty.gov/csb/heroin-opiates.