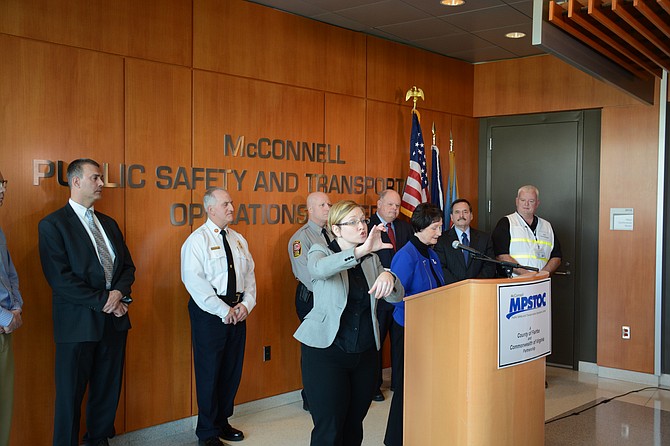 Fairfax County leaders gathered at the McConnell Public Safety and Transportation Operations Center in Fairfax on Jan. 21 to inform people about what to expect with the predicted blizzard over the coming weekend. Photo by Tim Peterson. 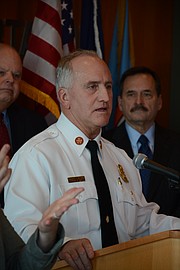 Fire Chief Richard R. Bowers Jr. encouraged community members to have a reliable back-up power supply, to only use open flames if absolutely necessary and to make sure generators are only used outside the home. 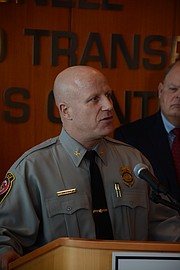 Fairfax County Board of Supervisors Chairman Sharon Bulova cited “a lot of damage” and “snarling traffic” at a press conference Thursday, McConnell Public Safety and Transportation Operations Center in Fairfax. The Virginia Department of Transportation, which she said is responsible for clearing roads -- not the County -- was seemingly unprepared.

Tom Biesiadny, Director of the Fairfax County Department of Transportation, said they had been in contact with VDOT all day, and that “trying to treat roads in rush hour is very difficult.”

WHEN JONAS HITS, Bulova encouraged everyone to “please stay home and stay off the roads.”

Additionally, the Chairman reminded people to check on elderly neighbors, people with disabilities and homebound individuals.

Fire Chief Richard R. Bowers Jr. reminded the public that “being prepared is everything” and “neighbors helping neighbors is our first safety net.”

Bowers also asked for help from citizens and business-owners in clearing snow from a three-foot radius around fire hydrants.

Referring to the expected snowfall that has been projected in excess of two feet, Bowers also cautioned that it would be a “heavy snow” with the potential to cause structural damage. He urged people to leave any building immediately if they hear creaking or shifting.

Chief of Police Col. Edwin C. Roessler Jr. said to expect delayed response times for officers responding to service calls, with road conditions projected to deteriorate quickly with the storm. Despite that, the Chief was confident the community will be able to weather the blizzard.

“We’ve encountered these types of events before and been successful navigating them,” he said.

The Fairfax County Snow Update Hub is available online at www.fairfaxcounty.gov/news2/snow-update-hub. Additional resources and information for blizzard updates can be found at fairfaxcountyemergency.wordpress.com. To report a road problem to VDOT, visit my.vdot.virginia.gov or call 1-800-FOR-ROAD (367-7623).