Residents, volunteers come together to dig out after Jonas drops over 20 inches. 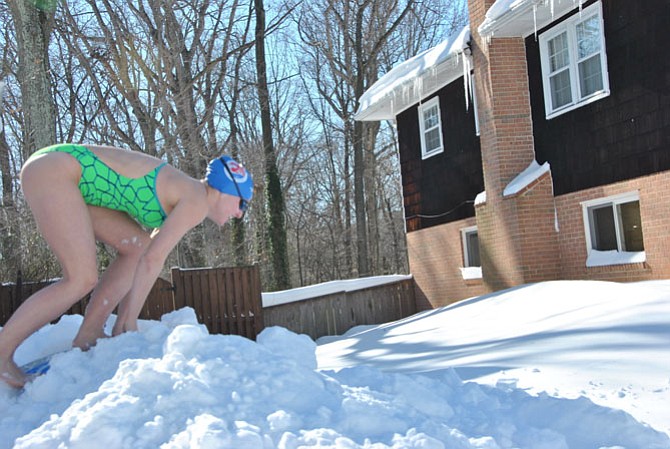 Bereft a pool that is open, Caroline Wittich of Springfield, also a member of the West Springfield Spartan Swim and Dive team, works on her start. Photo contributed 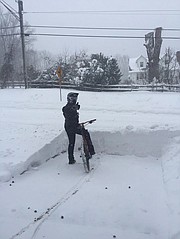 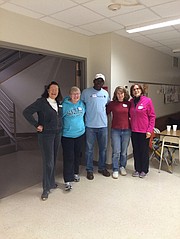 Volunteers from St. John Neumann Catholic Church in Reston and a staff member from Fairfax-based nonprofit FACETS help provide shelter, warmth and food for others during Winter Storm Jonas.

Guests enjoy warmth and a warm meal at a hypothermia shelter operated by Fairfax-based nonprofit FACETS during Winter Storm Jonas.

For one thing, projections of the snow beginning in earnest around 3 p.m. Friday and continuing, mostly uninterrupted until Sunday morning while depositing nearly two feet of the white stuff, were pretty spot-on.

“This is one of the first I remember where they got the projections basically right,” said Supervisor Dan Storck (D-Mount Vernon). “Timing and everything else was basically as projected. That was really very helpful for all of us to be able to respond.”

Storck said he was pleased to hear of “only a fluttering of power outages” compared to the extended lack of power that accompanied the “Snowmageddon” storm of 2010. “That’s absolutely the best news,” he said.

After receiving reports about lack of plowing service that he then relayed to VDOT, Storck made a few house calls Tuesday to see if crews had responded.

Supervisor Pat Herrity (R-Springfield) said as many as 200 people in Chantilly and Centreville lost power during the storm, but that it was restored in a short period of time.

GIVEN THE VOLUME of snow that fell, Herrity said he was generally positive on the job VDOT did digging out Fairfax County.

“This was clearly a big improvement over the dusting we had Wednesday night,” he said.

Herrity himself got behind a neighbor’s snow-blower and worked with neighbors in Little Rocky Run to clear a number of driveways and sidewalks for people who either weren’t home or had difficulty digging out themselves.

“The happiest thing I’ve seen, everywhere I’ve gone, is everyone out helping everyone, just a lot of neighbors helping neighbors,” said Herrity. “It’s always a good thing when people can come together and help other folks.”

Elsewhere in the county, numerous nonprofit organizations, Fairfax County staff and faith communities helped homeless individuals weather the storm, bringing them in from the cold.

Margi Preston, executive director of the Fairfax-based nonprofit FACETS, said her organization and volunteers at two different faith communities served more than 77 people during the storm.

“The volunteers from both St. Mary's and St. John Neumann were amazing and took excellent care of our hypothermia program participants,” Preston said in an email.

Normally, their hypothermia shelter would only be available overnight, one night at a time. For Winter Storm Jonas, FACETS extended the hours.

“There was enough food, planned activities and things to do to keep people entertained for the duration of the storm,” said Preston. FACETS shelters were open from 3 p.m. Friday until closing Tuesday morning at 8:30 a.m. They opened back up at 2 p.m. Tuesday and transitioned to new faith communities Monday afternoon.

“This is a lifesaving service that’s is a true community-wide effort to address the critical needs of those individuals experiencing homelessness in Fairfax County. The health and safety of these individuals is always our number one concern and we’re grateful to have such amazing partners to enable our community to come together for the greater good of our neighbors in need.”

DEAN KLEIN, director of the Fairfax County Office to Prevent and End Homelessness, said volunteers and staff from 55 faith communities, FACETS and other nonprofits including Cornerstones in Reston, Northern Virginia Family Service in Falls Church and New Hope Housing Inc. in Mount Vernon “really went above and beyond to ensure homeless individuals were safe.”

Klein said staffs at shelters were very well prepared and scheduled experienced individuals who would be able to manage spending several days in close quarters with homeless guests and engage with them in a meaningful way.

“This took a different level of commitment,” said Klein. “It was so impressive to see people coming together during this type of storm.”

“It’s a reminder when you see so many in need of more permanent housing solutions that it’s important to push for more affordable, safe housing options,” Klein added. “We still have people living in the woods who had to come in from the cold. They need opportunities to allow them to be independent.”

Anyone without at least one “passable” lane for traffic in their neighborhood by 6 a.m. Wednesday morning, Jan. 27, can report to VDOT at 1-800-FOR-ROAD or email novainfo@vdot.virginia.gov.