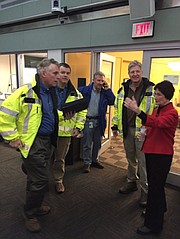 Left, Gov. Terry McAuliffe (D) is briefed on the impact of Winter Storm Jonas by Board of Supervisors Chairman Sharon Bulova.

Gov. Terry McAuliffe (D) visited the Fairfax County Emergency Operations Center on Sunday, Jan. 24, following the worst of Winter Storm Jonas to be updated on the state of the county in the blizzard’s wake.

“This was a major snow event,” McAuliffe said. With 13,000 pieces of equipment and 9,500 personnel in operation since Wednesday afternoon, the Governor said the storm is costing the Commonwealth of Virginia $2-3 million per hour. When all is said and done, costs could top out at $100 million, he said.

McAuliffe said he declared a State of Emergency Thursday, the first state to do so, which enabled weight limits on roads to be lifted and heavy equipment deployed, as well as calling up 700 men and women in the U.S. Army National Guard.

Board of Supervisors Chairman Sharon Bulova said that despite the resources being used by Virginia and Fairfax County, residents were needed to help with clearing miles and miles of sidewalks.

As of press time, Virginia Department of Transportation expected to have cleared at least one lane throughout the Commonwealth; its website with plow locations is available at www.vdotplows.org.