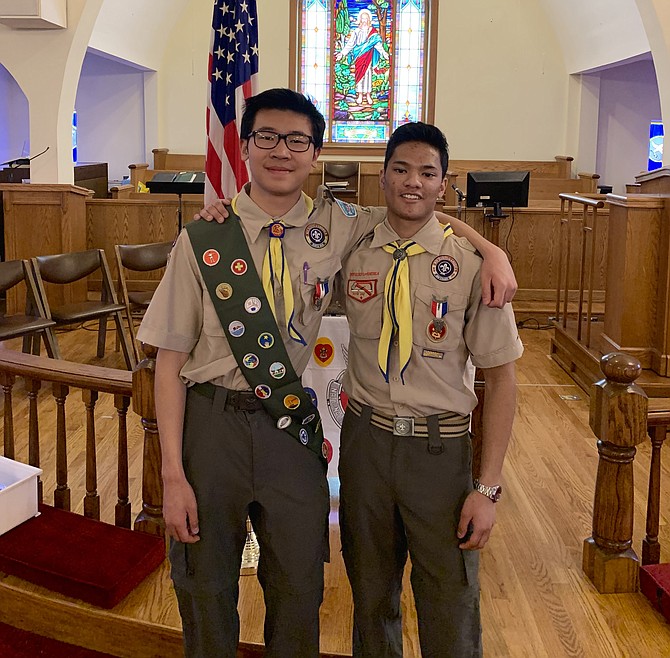 For his Eagle Project, Neal planned, built, and installed two Little Free Libraries in the village of Great Falls. Part of an international network, Little Free Libraries are small, individually designed “boxes of books” which allow patrons to take a book or leave a book whenever they like. Neal worked closely with the Friends of Great Falls Library and Celebrate Great Falls to find appropriate locations, and then put together a team of Scouts to help design and build them. Together they installed one library on the Village Green near the Creamery, and the other in Leigh Corners near the Brightview Senior Center.

Neal is a senior at a boarding school in Montana. He has been active in athletics since his freshman year, playing soccer, lacrosse, wrestling, and basketball. Following his graduation, Neal plans to major in exercise science/athletic training in college and would like to pursue a career as a personal trainer.

For his Eagle Project, Kevin improved a section of a trail in Scott’s Run Nature Preserve in McLean to reduce and stop erosion. To accomplish this, Kevin needed to carry out three tasks: 1) at the lower third of the trail, rocks had to be moved and shifted into the center of the trail; 2) the position of the water bars along the upper two-thirds of the trail had to be shifted; and 3) small trees needed to be planted in the upper half of the trail to act as filters to slow down running water. Kevin supervised a team of fellow Scouts and other volunteers to carry out his project.

Kevin is a senior at Langley High School where he is active in the marching and Wind Symphony bands. Kevin enjoys volunteering and helping others, and he teaches special needs students how to play instruments in the United Sound program at Langley, and teaches Sunday school lessons at McLean Bible Church. In his junior year, Kevin started doing track and field and took a liking to pole vault. That same year, he discovered a passion for history and received the Excellence Award for AP U.S. History.