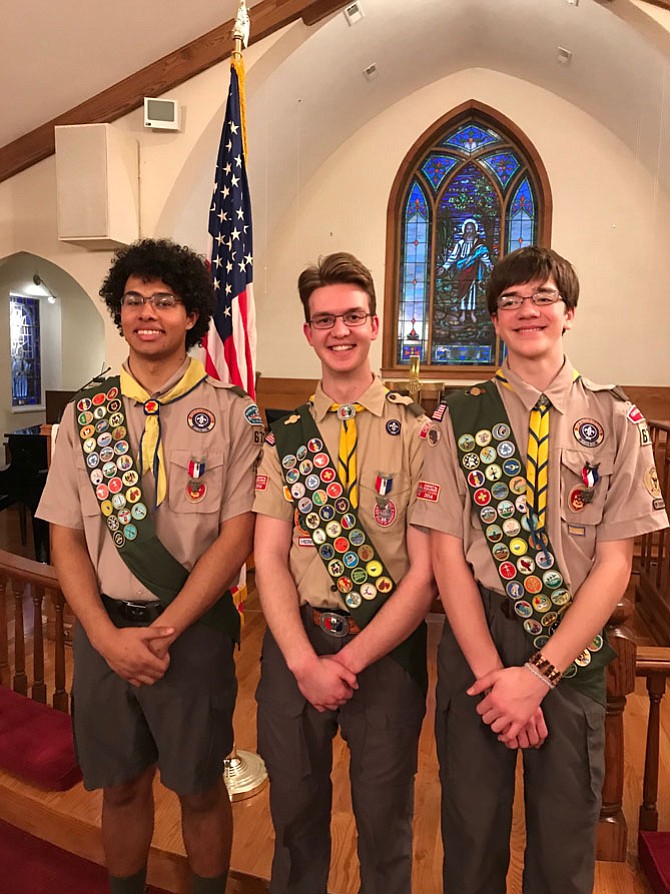 Buckley Ross, son of Margaret and Bruce Ross, joined Troop 673 in 2011. Since joining the troop, Buckley has served in the leadership positions of Patrol Leader, Instructor, Chaplain Aide, Assistant Senior Patrol Leader, and Senior Patrol Leader. While serving in these positions, he was accepted into the Order of the Arrow, Scouting’s National Honor Society; completed the requirements for joining the Order of the Arrow Brotherhood; and earned 30 merit badges. He participated in three of Scouting’s High Adventures: Sea Base (sailing in the Florida Keys), Philmont (hiking in the New Mexico mountains), and the Summit Bechtel Scout Reserve.

For his Eagle Project, Buckley constructed a 12 x 12 foot sandbox in the playground of the Great Falls United Methodist Preschool. The designated area was cleared of grass and a gravel drainage way was installed beneath the sandbox. The construction and installation was accomplished with more than 30 people participating. Buckley has revisited the sandbox every year since it was built in 2014 to top off the sand levels before Preschool begins each fall. It remains one of the most popular playground features today.

Buckley is a senior at Langley High School where he is a member of the varsity Crew team as well as active in the Langley Marching Band and the Wind Symphony. He is looking forward to studying computer science and engineering in college this fall.

Dakota Brookfield, son of Karen Hershey and Jon Brookfield, joined Troop 673 in 2013 after earning the Arrow of Light as a Cub Scout. Since joining the troop, Dakota has served in the leadership positions of Librarian, Quartermaster, Scribe, Patrol Leader, Instructor, and Assistant Senior Patrol Leader. He was accepted into the Order of the Arrow, Scouting’s National Honor Society; completed the requirements for joining the Order of the Arrow Brotherhood; and earned 43 merit badges, the National Outdoor Award (for camping), and the Frosted Camper Award. Dakota participated in Philmont, one of Scouting’s High Adventures, and also took part in the troop’s 42-mile Hike Across Maryland.

For his Eagle Project, Dakota cleared a meadow of invasive plants and shrubs at Riverbend Park and reforested the site with trees and shrubs native to the area. With a number of volunteers, Dakota cleared out stilt grass, brambles, and rose bushes, replacing them with ironwood, birch, and oak trees. The trees have had a survival rate of 80 percent.

Dakota is a sophomore at Langley High School where he is a member of the Science Olympiad team and participates in the marching band. After high school, he plans to pursue a career in the physical sciences.

Joshua O’Cain, son of Chiquita and Bruce O’Cain, joined Troop 55 in 2010 after earning the Arrow of Light as a Cub Scout, and while in that troop, he served in the leadership positions of Librarian, Historian, and Assistant Patrol Leader. In 2014, he moved to Troop 673, and served in the positions of Patrol Leader, Assistant Senior Patrol Leader, and Senior Patrol Leader. Joshua earned 28 merit badges, the Polar Bear Camping Award, and the Religious Award. He participated in a High Adventure at Summit Bechtel Reserve and plans to join a Northern Tier High Adventure next summer as an adult leader.

Joshua is a senior at Thomas Jefferson High School for Science and Technology where he is on the Physics Team and the Varsity Wrestling team. Following graduation, Joshua plans to pursue his passion in physics in college.