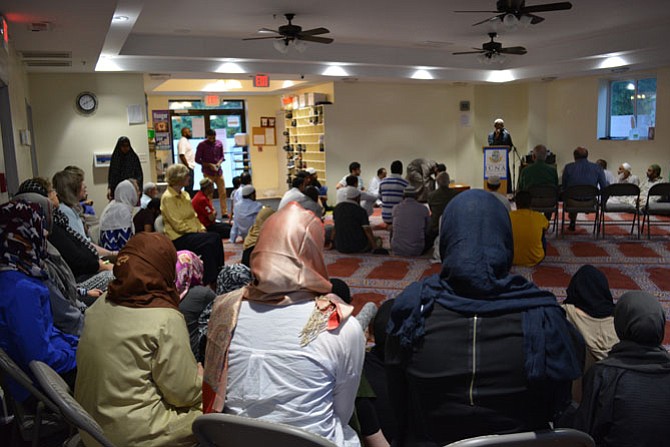 Members of the ICNA VA Islamic Center and additional community members listening to the mosque president, Rameez Abid, give a talk prior to iftar. Photo contributed by Sana Mahmood

The Islamic Circle of North America (ICNA) VA Islamic Center welcomed the surrounding community on June 24 to participate in its traditional iftar meal to celebrate the month of Ramadan.

Members of both the Mount Vernon Unitarian Church and Mount Vernon Presbyterian Church were present, as well as additional community members. The event strived to unify differing religions and build a more consolidated community for both Muslims and non-Muslims alike.

“I think it’s an amazing thing and you can never reach out enough. It’s definitely a necessary step not only Muslims need to take but people of all faiths so we can create that sense of community,” said Sana Mahmood.

Mahmood, 21 years old, has been a member of the mosque for several years. She is also an Alexandria native having graduated from West Potomac High School. She, like a majority of her peers, feel that unifying religions is not only desirable but necessary in the community.

“At the end of the day we’re all Americans and we’re all apart of this melting pot. We never do enough to unify each other and I’m thankful for you guys for coming out to the mosque … We’re all human beings and we need to care for one another regardless of whether it’s in or out of a place of worship. We owe it to each other,” said Unaiza Khalid.

Khalid, a member of the ICNA, feels that religion shouldn’t be a dividing factor among people despite differing beliefs or perspectives.

“Regardless of whether I know enough or not enough about your religion, if I care about you as a human being and want to be apart of your happiness, and your holidays and religion makes you happy, I’ll be right there next to you supporting you regardless of what anyone has to say to pit us against each other,” added Khalid.

Jensen Wainwright, a non-Muslim community member and West Potomac High School graduate, felt that the community still has a long way to go in terms of unifying religions.

“I feel our community is lacking a bit on inclusion. The Northern Virginia area is pretty divided by race and class, even if it isn’t very apparent. I think events like this are amazing and so necessary in bettering the community.”

“Coming from a Christian family and being the only Muslim, it’s important for people to explore and actually know about the religion. I tell my parents all the time that you shouldn’t speak about something you don’t know about. Learn about it. You don’t have to become a part of it, but you can be informed,” she said.

Also within the scope of education, Mahmood touched upon negative media coverage regarding Islam that influences many individuals.

“I feel like if there’s one thing the mainstream media uses against us, it’s the fact that we don’t know much about other people’s faiths or what other people are practicing. They use that lack of knowledge against us, but if we come together and teach one another about our differing religions and beliefs, I don’t think the mainstream media would be able to use that tool against us and create an unnecessary divide,” Mahmood said.

As Ramadan comes to a close on the evening of July 5, the group appreciates the sense of community they’ve been able to see throughout the month and hope to improve on this in the future.

“You can go into any mosque for Iftar and they’ll welcome you with open arms … It doesn’t matter what your race is, your ethnicity, what language you speak, everyone is one big, happy family,” Mahmood said.

ICNA will be hosting additional events open to the community during the month of October. For more information, visit icnava.org or call 703-660-1255.