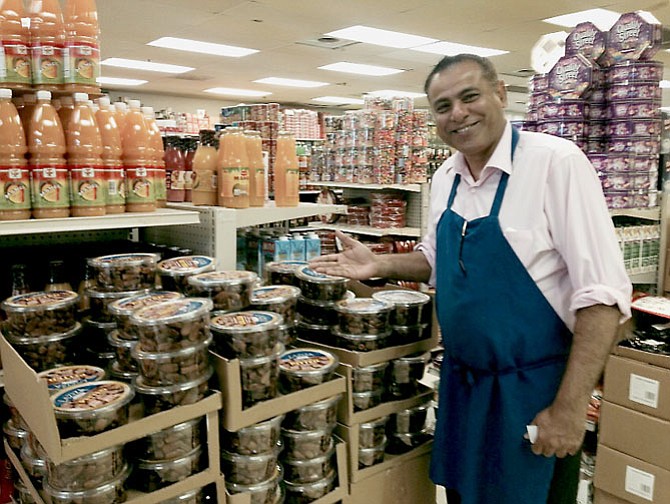 By By Amina Luqman/Gazette Packet

Visit any area mosque these days and it’ll be abuzz. Families are there, 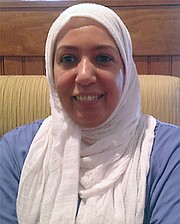 Nessrin Guindy, at The Holy Cow. Guindy works as an Arabic interpreter. 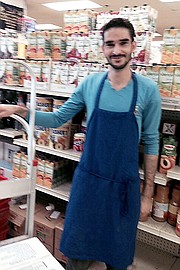 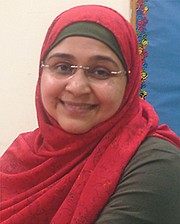 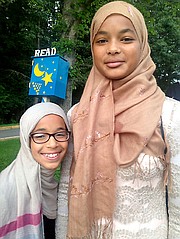 Farida Alsadig, 13, and her sister Ghalia Alsadig 7 at the Muslim American Society Community Center standing in front of the free library created in the My Selfie program.

breaking fast, praying, reading Quran and visiting with one another late into the night. This is the Muslim holy month of Ramadan. Each year, it falls on the nine month of the Islamic calendar.

During this month, from sun up until sunset, Muslims abstain from food or drink, as well as, refraining from certain behaviors such as smoking and other negative acts. On a hot summer day, when sunrise begins around 5:30 a..m and sunsets at around 8:30 p.m., fasting can be a difficult prospect.

Sitting in the Holy Cow on Mt. Vernon Avenue is a fasting Nessrin Guindy, an Arabic interpreter. Burgers are being passed about, the smell of French fries fills the air and Guindy is seated comfortably at a table with friends as they eat. “This is nothing for me.” She’s smiling. “I’m perfect.”

“Yes, some days are really hot and you feel thirsty and tired.” But that’s the exception for Guindy. In the end, Guidry said, ”Fasting gives you energy.” After a day of fasting what does Guindy crave? “The first thing I run for is something sweet.” She smiles. “Then water and maybe a bit of yogurt.” Contrary to what one might think, she doesn’t over indulge after a day of abstinence. She says that’s true for many Muslims. “We don’t eat much after fasting.” Guidry said,“It’s not about the food. It’s a time to renew your relationship with God. It’s a time to teach self control.” For Guidry it’s a time to also see beyond her needs. “It’s a time to think about others; the poor, and to give charity.”

It’s a rainy morning at the Fair Price International Supermarket on Edsall Road. The shelves are full of items from parts of the Middle East, South Asia and beyond. Khalid Hussain, the store owner, moves quickly among the stocked boxes and store aisles. “We get busier,” Hussain said about Ramadan. “Ramadan is a time for blessings. It’s a time when people might spend a little more for something special.”

About his own experience during Ramadan, Hussain said, “I enjoy this time. I enjoy it with my family and I pray. I feel more connected to my religion.”

“We sell more dates and apricot paste. It’s a tradition, to open the fast with dates,” said Samira Aslam, a cashier at Fair Price. “Arabs like to use apricot paste in drinks. It’s summer, so people more concentrate on drinks.”

During Ramadan, Muslims are also expected to refrain from negative or sinful behaviors such as gossip and backbiting. Some choose to use it as a time to limit their exposure to media. Behind the meat counter, Salman Abdulrehman, a butcher, is busy cutting through a piece of raw halal meat. These meats are butchered by guidelines in Islamic law. “I feel very relaxed and smooth during Ramadan” Abdulrehman said. It’s a quieter time for him. “No music. No TV,” he said. His days are busy and simple. Early rise, then to work for a long day, home then it’s soon time to break fast.

Sikander Khan, another shop worker, is busy moving boxes out of the store room. He speaks quietly about Ramadan: “Tea. Tea is what I drink first, he says about breaking his fast each evening. “Pakistani people like their tea.” He smiles “Then I like to eat spicy rice.”

Ramadan is considered a powerful spiritual month. “We believe that whatever we want, Ramadan is when we ask. Like asking for forgiveness and asking for good wishes,” said Rabia Pervez, a mother and teacher. “Ramadan is very enlightening and festive. We look forward to it every year.” For Pervez, Ramadan is easier for her. “I don’t have to be in the kitchen as much because we come to the mosque. But don’t tell my husband that,” she whispers, laughing.

At his Washington Wireless cell phone accessories counter in the Landmark Mall, Shah Hassan becomes excited when he speaks of Ramadan. “I try to be my best. My best with other people, with animals, with everything. It’s about your spirit. It’s not about food. You wake up and ask Allah for forgiveness and you remember that God is very caring.”

For young Muslims, Ramadan can also be filled with its own lessons and learning. Farida Alsadig, 13 of Fairfax County, has spent many of her Ramadan days at the Muslim American Society Community Center on Edsall Road. She’s been fasting and participating in their My Selfie program. The program is run during Ramadan for middle school-aged youth. The program is designed to create a sense of community among Muslim youth while promoting leadership skills and empowerment.

Alsadig appreciates the program. “It really helped me. It can be tough.” Alsadig was talking about school.

“The My Selfie program gave the youth a chance to talk about some of the difficulties they experience in public school,” said Sister Shelly McKinney, the program’s founder.

The program culminated with a free library created by Alsadig and other youth. The blue library box was placed in the parking lot of the Muslim American Society Center. “Give a book and take book” said McKinney. “It’s meant for everyone.”

For Muslims, the last 10 days of Ramadan are particularly special. It’s during this time that there’s a “Night of Power,” Muslims’ holiest night of the year. It’s believed to be the night of revelation, when the Quran (the Muslim holy book) was first revealed to Prophet Muhammad. It’s believed that the Night of Power falls on an odd numbered evening during the last 10 days of Ramadan, either the 21st, 23rd, 25th or 27th night of Ramadan. It’s during these evenings prayers increase.

For Farah Kharif, a Sudanese taxi driver, these evening prayers have meant very late nights and sleepy days. He’s in Landmark Mall shopping with his family. Khafir enjoys Ramadan, “but the days have not been very good for my job.” He said. “I need to be up early in the morning for jobs.”

Eid al-Fitr marks the end of Ramadan. It’s comes at the end of the month at the sighting of the crescent new moon. This year the day will fall either on July 17 or 18, depending on the sighting. Mosques will hold Eid prayers and there will be festivities and food. The day is often considered a special one for children. They often get new clothes to wear and gifts are given to them.

It’s just days before Eid, Zubaii and Abia Khan are searching the children’s clothing racks at Macy’s in Landmark Mall. “We are shopping for the boys,” said Zubaii Khan as he calls his two, Muheeb and Muujeeb over. “Just for the boys. For Eid,” he added. Other families, just like them are walking here and there in the mall, each searching for the perfect items for Eid.