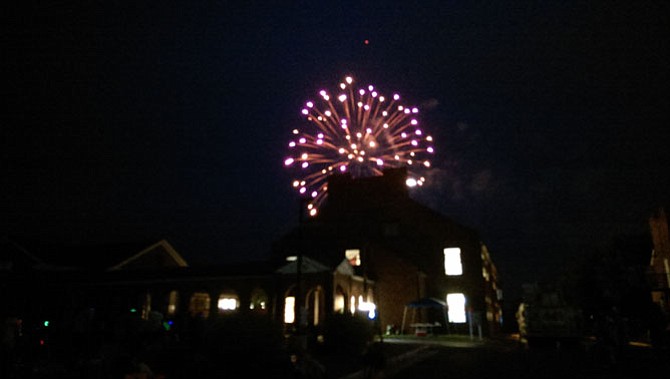 Despite a somewhat cloudy sky, fireworks at the Workhouse Arts Center went off as planned, beginning around 9:10 p.m. with the singing of “The Star-Spangled Banner.” Photo by Tim Peterson. 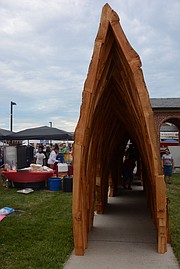 Thousands of visitors got their fill of fireworks July 2 at the Workhouse Arts Center in Lorton, two nights before Independence Day.

As the sun went down that Saturday night, visitors to the former prison were able to explore open art galleries and resident artists’ studios.

Several food trucks were set up near the entrance to the arts center, filling the increasingly crowded central lawn area with mingling aromas of grilled meats, vegetables and various fried snacks.

Before darkness fell completely, those close enough to the Rizer Pavilion tent to hear and see were entertained by acts including the electrified and driving African sounds of Peter Mawanga and the Amaravi Movement, and pop and rhythm and blues covers from PBC Vocal Band.

Spece introduced Lt. Col. Christopher Tomlinson, Fort Belvoir Headquarters Battalion Commander. Tomlinson reminded everyone to “take time to think about those who are deployed, at this time, that they’re there.”

Despite a somewhat cloudy sky, fireworks went off as planned, beginning around 9:10 p.m. with the singing of “The Star-Spangled Banner.” A single rocket climbed into the crowd’s view, timed perfectly with the line “rocket’s red glare.”

The full display picked up just as the singer completed “and the home of the brave.”