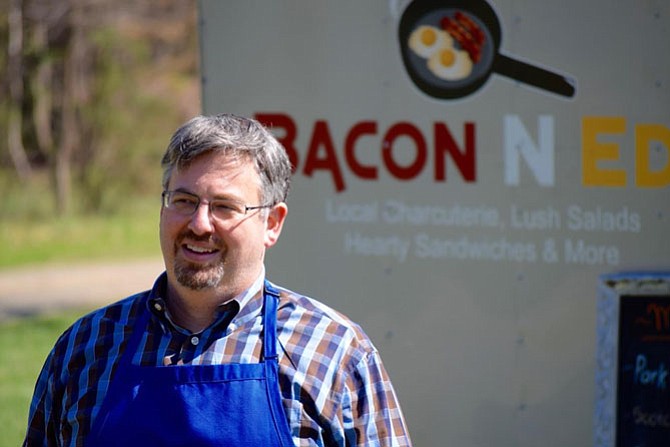 How often do local foodies come across a food truck with such an eye-catching logo: BaconN’Ed’s? An obvious play on the iconic American breakfast—bacon and eggs—the food truck even sports artwork of eggs sizzling in a skillet. And who is the playful chef who has devised this eye-catcher and whose truck has recently been parked in Reston at lunchtimes.

Unlike many chefs, Richmond native Hardy did not grow up in a food-centric family and did not learn the basics from his mom or grandmother. But he did cook his way through the last two years of college at the University of Virginia. He even worked in several local Charlottesville restaurants, thinking that cheffing would attract girlfriends. There Hardy learned some basic kitchen skills and even grew to enjoy cooking and playing around with recipes. But after graduation, he went to work as a staff member for several congressional campaigns, a far cry from tending to sizzling steaks.

Fed up with the political life, however, Hardy left politics for good, moving to New York to enroll in the French Culinary Institute (now called the International Culinary Center). After earning his degree there and graduating third in his class, Hardy honed his cooking skills by working in two notable Manhattan kitchens and chefs: with Chef Marcus Samuelsson and with chef Michael Romano.

After working other New York chef jobs, Hardy headed to D.C., where after a stint at a now-closed McLean restaurant, and working at his Quench restaurant in Rockville, Hardy decided on heading into other projects. Noting that the plaza at Reston’s metro station offered space for retail food sales, he worked there for half a year, and then moved on to his food truck business. In the meantime, however, he has become something of a food celebrity. “I have appeared on the Food Network,” he said, “and I get lots of social media attention.”

Ah, food-truck food, some critics may say. But they can’t disparage Ed Hardy, who applies his culinary training to his food. “Fine dining is not left behind,” he said. “I find that making additions to recipes makes a dish better, like bacon and breakfast sausages.” He also has created a stunning chicken sandwich that is not your typical mayo-lettuce combo. He calls it Fried Chicken banh mi, which is a take on a classic Vietnamese sandwich, but with boneless crunchy chicken and crispy bacon. Speaking of bacon: Hardy even cures and smokes his own.

But Hardy offers many other temptations, and even if you wish, he will cook up a pig roast. Sadly, he does not have a brick-and-mortar location, but if you check his Facebook page daily (https://www.facebook.com/BaconNEds/), you can track him down, then pig out. He stresses, however, that his appearances are generally by appointment. As he noted, “Truly the best way to experience our food is to log onto www.mobilegourmetkitchen.com and book us.”