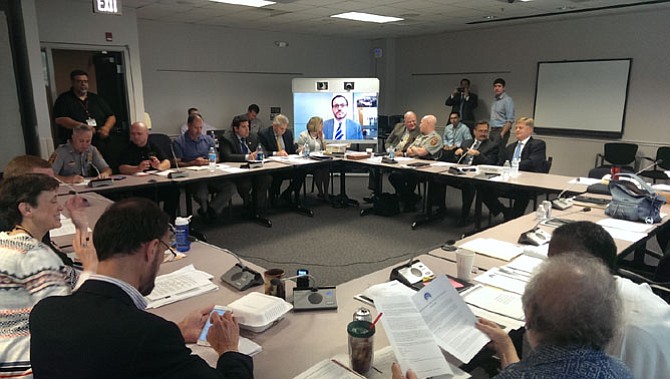 There was general agreement among County Supervisors at the July 19 Public Safety Committee meeting they’re in favor of moving forward with recommendations from the Ad Hoc Police Practices Review Commission to create both an independent police auditor and civilian review panel. Photo by Tim Peterson. 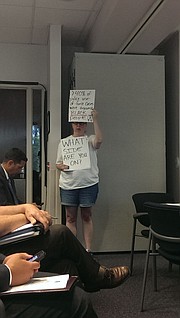 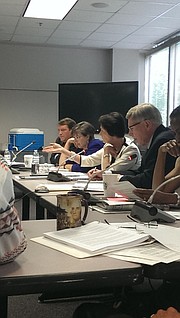 Neither the independent auditor nor civilian review panel would conduct an independent investigation of the complaint, but would refer the case to the Chief of Police and he to the Internal Affairs Bureau for investigation. Or as Board of Supervisors Chairman Sharon Bulova put it: “It’s another portal complaints can come from.”

Details of an independent auditor for Fairfax County police and a civilian panel to review cases of alleged FCPD abuse of authority or misconduct are still being hammered out. However there was general agreement among County Supervisors at the July 19 Public Safety Committee meeting that they are in favor of moving forward with the recommendations from the Ad Hoc Police Practices Review Commission to create both entities for accountability.

The meeting was held to discuss the recommendations from the commission’s Independent Oversight and Investigations subcommittee so that a formal board matter accepting them can be drawn up in time for a vote this fall.

Public Safety Committee chair Supervisor John Cook (R-Braddock) opened the meeting with a moment of silence, and then a perspective on the need for reforms to aspects of the County’s policing.

“We need to be bringing people together,” Cook said. “How do we further connect the community and our law enforcement, have that dialogue.”

In reference to creating a civilian review panel, Cook added Fairfax County would “do what other jurisdictions are doing, and hopefully do it better.”

TO GIVE AN OVERVIEW of independent and civilian review of law enforcement, Independent Monitor Nicholas Mitchell with the City and County of Denver Office of the Independent Monitor spoke to the crowded Fairfax County Government Center conference room. Mitchell also spoke as a board member of the National Association for Civilian Oversight of Law Enforcement.

“There’s the proposition as citizens we’re obligated to ensure powers are being consistent with the Constitution and our system of laws,” Mitchell said. “And the proposition with granting of power, comes respect and accountability to the community.”

Mitchell said there is no one model for civilian review boards, and that most large cities and an increasing number of medium and smaller-size cities are forming them. Some are formed preemptively, others in the wake of critical incidents involving police.

Jack Johnson, chair of the Independent Oversight subcommittee, reviewed the recommendations word for word. He explained they were voted through unanimously, including the representatives from law enforcement and FCPD.

Under the recommendations, independent oversight of Fairfax County Police would be undertaken by an independent auditor and civilian panel. The auditor would handle use of force cases that resulted in death or serious injury. The civilian panel would look at other alleged FCPD abuse of authority or misconduct. Residents could bring a complaint directly to the Civilian Review Panel, which would refer the case to the FCPD for investigation.

In each case, the reviewing party would not conduct an independent investigation of the complaint, but would refer the case to the Chief of Police and he to the Internal Affairs Bureau for investigation.

Or as Board of Supervisors Chairman Sharon Bulova put it: “It’s another portal complaints can come from.”

Fairfax County Chief of Police Edwin Roessler said the recommendations are fully supported by his department. Roessler embraced independent oversight as an important part of trust with the community. “We’re on the same page. There is no conflict,” he said.

Det. Sean Corcoran, president of the Fairfax Coalition of Police Local 5000 and a member of the Ad Hoc Commission, said despite the unanimous commission vote for an auditor and civilian review board, there are more details that need to be taken into account before moving forward with the recommendation.

“There’s concern about fiscal costs,” Corcoran said. “Our internal affairs is strapped as it is right now.”

The Supervisors reviewed a draft job description for the auditor, who would be a full-time County employee, and language that would formally set the scope, organization and process of the Police Civilian Review Panel.

Supervisor Pat Herrity (R-Springfield) echoed Corcoran in calling for the group to take more time dealing with the “devil in the details” rather than rushing forward with the recommendations.

“Can we get there in a fiscally responsible way?” Herrity asked. “What’s this going to cost us? In distraction? Time taken? Someone needs to make some estimates.”

Herrity questioned whether both an auditor and civilian review panel were necessary, and if there might be a better way to “get transparency without creating bureaucracy.”

Randy Sayles of Oak Hill was a member of Ad Hoc Commission Use of Force subcommittee and attended the majority of the full meetings. He sat in the front row of Tuesday’s meeting.

Sayles said he thought the day’s discussion did a “good job” capturing the work of the commission on independent oversight.

With regard to the composition of the civilian review panel, Sayles said he would like to see language requiring a law enforcement representative have a seat at the table. They could be retired, just not from Fairfax County.

“To speak up and give that perspective,” he said would be an important addition. “That’s a recommendation I’m standing by to this day.”