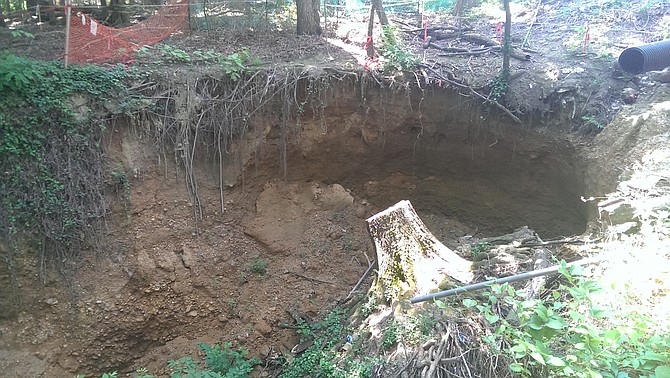 Mike Marsala, senior design engineer with Wetlands Studies and Solutions, Inc, said filling in the ‘Grand Canyon’ at the top of the Quander Stream outfall project will be the most challenging aspect. Photo by Tim Peterson. 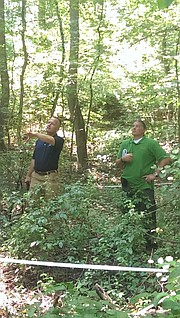 Friends of Dyke Marsh president Glenda Booth (center) and representatives from Fairfax County Park Authority and other government agencies surveyed the Quander Stream site on July 25 for a preconstruction meeting.

It’s safe to say Dyke Marsh should not be orange. Yet about two years ago, that’s what members of the group Friends of Dyke Marsh who lived in the River Tower condo building observed.

Though Dyke Marsh extends off the east side of the George Washington Memorial Parkway, Booth said there’s a sometimes forgotten portion of the marsh, “a tidal wetland, largely undisturbed,” to the west of the parkway.

After Booth and the Friends group brought the issue to Fairfax County’s attention, they linked the orange coloring to sediment runoff from a stream running through Mount Vernon Park, beginning behind the intersection of Dartmouth and Swarthmore drives in Alexandria.

Charles Smith, Branch Chief with the Fairfax County Watershed Projects Implementation Branch, Stormwater Planning Division, said the forest has likely been stable since 1900, but around 2000, there started to be more frequent and larger storms. Impervious surfaces in the 60-year-old community also prevented much of the water from being absorbed into the ground around the houses.

Trees came down, and around 2005, Smith said clay around the stream started to break loose and flow down to the marsh, and eventually depositing sediment and nutrients into the Potomac River and Chesapeake Bay.

To correct the problem, Fairfax County hired Wetlands Studies and Solutions, Inc. to design a stream reconstruction and Angler Environmental to carry out the project.

Construction is scheduled to begin Aug. 8, with the work entrance being put in and some clearing operations. Trees will have to be taken down, Smith said, but there will be restoration planting.

THE ERODED CHANNEL is going to be elevated around 15 feet at the outfall, to within five feet of the surrounding land. Total project length is about 920 feet.

Mike Marsala, senior design engineer with Wetlands Studies and Solutions, Inc, said the stream fill-in would be a combination of rocks, rock structures and wood sills that will become embedded organically in the environment.

Smith said the vicinity of the stream is one of the last remnants of coastal plan land in the area. Cherry oak, sassafras and pink azaleas are among the unique native species.

“This is one of the best chunks left in Northern Virginia,” Smith said, “a lot of unusual wetland plants.”

Smith said the site will be restored with native plants “to provide habitat and stabilize and rebuild soils.”

Booth, Smith, Marsala and representatives from Fairfax County Park Authority and other government agencies surveyed the site on July 25 for a preconstruction meeting.

Smith said “Pardon Our Dust” flyers should be distributed to community members this week.

“I’m encouraged,” Booth said. “They’ve come up with a design to correct the problem and improve the structure for the health of the marsh and the area. We’ve very grateful for the county’s support and funding.”