Fairfax County’s Streams Are in Trouble

82 percent of Fairfax County’s streams were in very poor, poor or fair condition biologically in 2020. 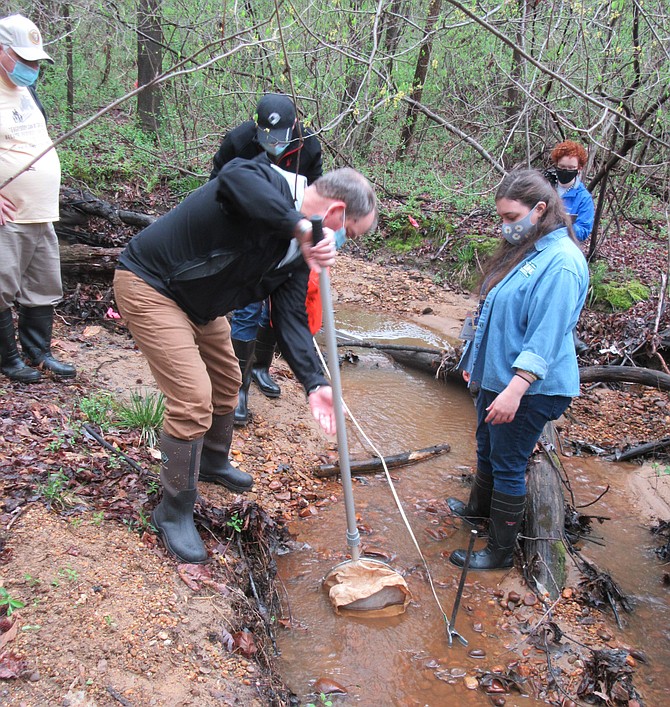 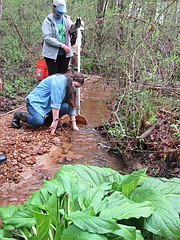 Ashley Palmer and Joan Haffey stir up the stream bottom near a thriving skunk cabbage.

Greg Crider and Joan Jaffey sort through the collected material looking for "critters."

Young salamanders, an exciting find, but not a benthic macroinvertebrate, one of the organisms that indicates stream health for this project.

Their mission: determine the habitat quality of an unnamed, intermittent stream flowing through the 80-acre Mount Vernon Park and into west Dyke Marsh. Led by Ashley Palmer and Meredith Keppel of the Northern Virginia Soil and Water Conservation District, the group collected material at 20 sites within a 100-meter span and then probed it for critters called benthic macroinvertebrates, one indicator of stream health. Some species are tolerant of pollution and degraded environments and others are very sensitive.

In this the fifth year of monitoring, the Friends of Dyke Marsh group found 66 organisms, the highest recorded count for this site, including multiple truefly larvae and dragonfly nymphs.

“We also found three casemaker caddisflies which had not been recorded here previously and are a very uncommon find in our stream monitoring workshops in Fairfax County,” exuded Palmer. “These organisms are generally very intolerant of pollution and seeing them was truly a treat!”

The protocols that rate ecological condition consider a score over 14 as acceptable; eight to 14, partially acceptable; and under eight, unacceptable. On April 9, the stream garnered a score of 15. Past scores have ranged from three to nine, but experts urge caution in interpreting scores which can be influenced by many variables.

The Friends of Dyke Marsh started monitoring this stream annually after Fairfax County in 2017 stabilized a failing stormwater outfall and erosion gully 20 feet deep, 50 feet wide and 200 feet long. During storms, so much sediment from the gouged-out streambanks was pouring downstream that west Dyke Marsh turned orange, alarming locals who sent photos to county officials.

Most Fairfax County streams are impaired, county data show. In 2001, 75 percent of the county’s streams were in very poor, poor or fair condition biologically. By 2020, that number has risen to 82 percent. While there is annual and seasonal variability, “Overall there has not been much change that is statistically significant,” Shannon Curtis, Watershed Assessment Branch Chief of Fairfax County’s Stormwater Planning Division told March 12 Green Breakfast attendees. “There is more diversity being observed in our streams, but it’s occurring with organisms that are pollution tolerant,” he added.

The county’s population has exploded from 20,000 people in 1900 to 1.2 million today and ever-metastasizing development has replaced what was once farmland and forests. Widespread impervious surfaces, like parking lots, roofs, driveways and roads, block the natural infiltration of precipitation into the soil. Most stormwater today flows off these hard surfaces, carrying pollutants into area waterways. Stormwater runoff is the fastest growing source of pollution to the Potomac River, reported the Potomac Conservancy in 2020.

Pre-settlement, forests and beavers “managed” stormwater, Curtis said. “Stream health declines with urbanization. The preponderance of our problem is land use impacts.” What’s happening upstream and coming into the streams is what’s causing the problems, he explained.

Salinization of streams is a growing problem and the environment may be actually storing salts from winter deicers and releasing them year round, Curtis said.

Since 1959 when the Board of Supervisors enacted a flood plain ordinance, the Board has initiated several stream protection initiatives, like the Chesapeake Bay ordinance, a sediment and erosion control ordinance, a stormwater tax and 11 watershed management plans.

Fairfax County has 400 square miles of land, 30 major watersheds and 1,000 miles of streams. Curtis ended his talk, expressing hope for recovery of stream health and pointedly asking, “How long will it take?”