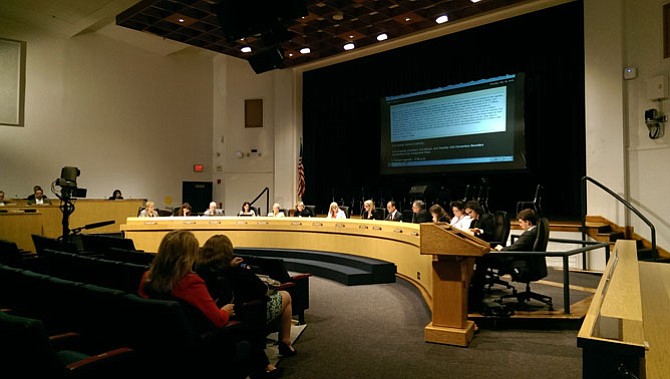 At the School Board’s May 26 regular meeting, its members adopted a $2.7 billion budget that will take effect July 1. Photo by Tim Peterson.

The Fairfax County School Board has made good on Superintendent Dr. Karen Garza’s promise when she introduced a FY 2017 budget for the school system.

“The most important announcement for our students and teachers may be what the proposed budget does not do,” Garza said at a press conference held Jan. 7 at West Potomac High School, “it makes no further cuts.”

At the board’s May 26 regular meeting, its members adopted a $2.7 billion budget that will take effect July 1.

Highlights of the budget include a salary increase plus one percent market scale adjustment for all employees who are eligible, $40 million to make teacher salaries in particular more competitive in the region and $10 million aimed at lowering elementary school class sizes.

School Board Chairman Pat Hynes praised the Fairfax County Board of Supervisors in a statement for engaging with their educational counterparts to overcome an early gap between the two bodies’ advertised budget that eclipsed $70 million.

“Working together, we were able to secure the funding necessary to make critical investments in teacher pay, reduce the size of some classes in our elementary schools and maintain our instructional programs and services to our students,” Hynes said. “We sincerely want to thank the members of the community who rallied to call for increased support for their students, teachers, and schools.”

It took the supervisors adding an extra cent to the real estate tax and directing that additional revenue to the school system to make the Fairfax County transfer to FCPS viable for Garza’s goals.

“I am hopeful that this budget represents a turning point for our schools,” Garza said in a statement. “This reinvestment in our community’s most important asset will provide great dividends for all the citizens of Fairfax. We are already looking ahead to FY 2018 and will continue to work as partners with the Board of Supervisors to solve these vital challenges for our community.”

Fairfax County’s transfer to the School Operating Fund ended up being a 4.8 increase over the FY 2016 Budget. FCPS also benefitted from an increase in state aid and sales tax, and $6.7 million in reductions from the previous year because of reductions in student enrollment.

The school system received an increase from the General Assembly of $16.8 million from the FY2017 Advertised Budget. It was also $22.3 million more than reflected in the FY 2016 Approved Budget, according to FCPS spokesman John Torre.

The board also approved several add-on motions that carried with the FY 2017 budget. Those included Hynes calling for continued collaboration with the Board of Supervisors and focusing joint discussions on the Successful Children and Youth Policy Team.

Providence representative to the School Board Dalia Palchik’s motion for the board to encourage the supervisors to move a meals tax to referendum in this fall’s election was successful as well.

More information about the FY 2017 FCPS budget and the budget process are available at www.fcps.edu/news/fy2017.shtml.