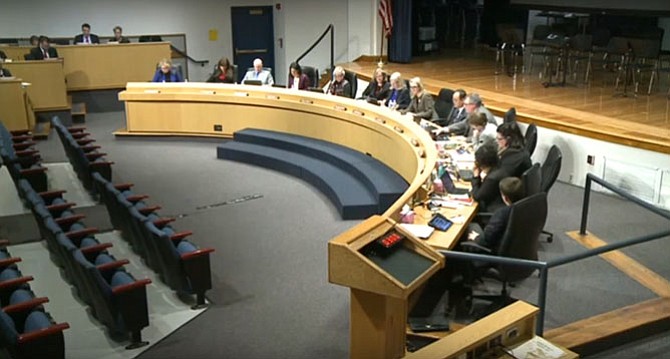 The School Board approved the $2.67 billion advertised budget it will present to the Board of Supervisors April 5.

Jeanette Hough, a newly elected at-large school board member, introduced an unsuccessful amendment that would have reduced the proposed Fairfax County transfer to the school system by $4.3 million.

Members of the Fairfax County School Board have taken the next step in realizing Superintendent Dr. Karen Garza’s vision of no additional cuts in the Fiscal Year 2017 school system operating budget. The $2.67 billion budget, a $121 million or 4.8 percent increase over the FY 2016 approved budget, was supported unanimously at the board’s Feb. 4 regular business meeting.

Highlights of the new budget include a step and one percent market scale adjustment salary increase for all FCPS employees, as well as another $40 million earmarked for making teacher salaries more competitive and reducing class sizes in elementary schools.

“The Superintendent’s Budget Task Force spent many hours over several weeks last summer and fall developing a list of potential program cuts and new fees,” Board Chairman Pat Hynes said in a statement. “Those cuts and fees are not in the Advertised Budget because they would fundamentally change the quality and character of FCPS. I did not leave the classroom to serve on the School Board so that I could preside over the dismantling of this world class school system. Potential cuts will, sadly, have to be considered should we not receive the revenue our schools need.”

BUDGET COMMITTEE chair and School Board member Janie Strauss introduced the motion to approve the budget.

At-large member Jeanette Hough, a new addition to the board, presented a lone amendment to the advertised budget. She proposed reducing the transfer request from Fairfax County by $4.3 million, in part through recognizing additional funding from the Commonwealth of Virginia and also absorbing some employee living wage expenditures into the Food and Nutrition Services fund.

Increased funding from the state, a potential $3.2 million, is part of Gov. Terry McAuliffe’s proposed budget, which the General Assembly has yet to approve. This uncertainty caused most other board members to vote against the motion.

“It’s still a proposal of the Governor’s, not in hand by any means,” said Vice Chairman and Mason District representative Sandy Evans. “It’s also a best case scenario. These chickens are far from hatching.”

There was also concern over the effect Hough’s proposal would have on developing a higher quality food program.

“As we try to improve nutrition for our young people, I don’t want to put more pressure on that fund right now,” said Strauss.

Though each member congratulated Hough on her effort to dig into the budget and make an attempt to improve it despite her short time on the board, Springfield representative Elizabeth Schultz and the new Sully member Tom Wilson were the only other members to vote in the amendment’s favor.

“In the Virginia state code, there’s a requirement for board members to run school systems with ‘the utmost efficiency,’” said Schultz, who went on to address the Food and Nutrition Services aspect of the amendment: “This is an incredibly modest way to recognize a self-sustaining fund that numbers bear out over time is already provided for in the budget.

“The best face we can put forward is that we have done all the appropropriate things to recognize savings when we can,” Schultz added.

Hough defended her work, explaining with regards to the change in revenue from the Commonwealth, that based on comparing projected and actual funding, it wasn’t unreasonable to reflect the Governor’s proposal in the budget.

“The whole budget process is based on assumptions that may not come to fruition,” she said. “I do think that when we look at what this $3.2 million is, it’s just another assumption we’re basing our budget on.”

In discounting the amendment, other board members explained that this preliminary approval vote is just the first part in a multi-step process. The board will present the budget to the Board of Supervisors on April 5. Once it’s clear what will be revenue and transfer from the county and the state, the board will have another opportunity to make changes and cuts, Hynes said.