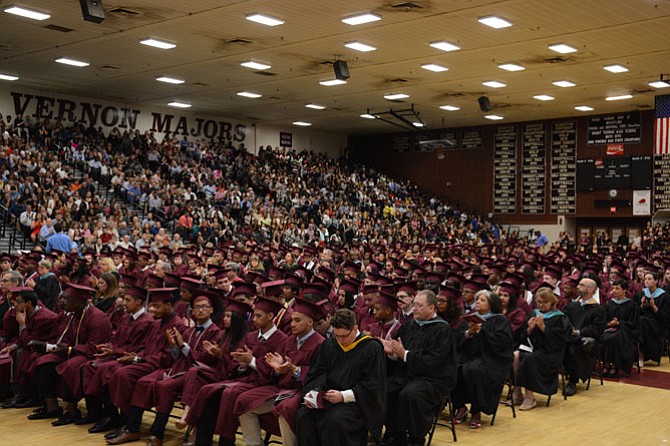 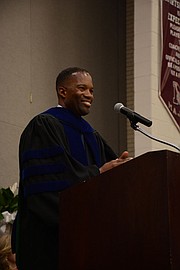 Though he’s only been with them for three months, new Mount Vernon High School Principal Dr. Anthony Terrell said he quickly came to admire the senior class of 2016.

“You truly are a mosaic of human experience,” he said in his remarks at the school’s June 17 graduation, held in the Michael M. Skinner Field House on campus.

“You’ve brought unshakable Major Pride to every endeavor. You’ve made Mount Vernon as good as it ever was, and it’s well on its way to being greater, thanks to you.”

The school’s gymnasium, named for the former subschool principal Skinner who sat among other honored guests on the stage, was packed. Later-arriving friends and families were asked to relocate to the auditorium to watch a live video feed of the ceremony.

Class of 2016 president Justin Smith commented on the “special, flashy occasion” that is graduation. He followed by admitting he doesn’t think he’s ready for the transition into adulthood.

But he spoke to growing and maintaining a legacy of service over a lifetime, whether you’re ready for the transition or not.

“Don’t stop grinding until you’ve changed someone or something for the better,” Smith said.

Honor graduate speaker Madeline Belanger said she feels “sorry for schools that aren’t gifted with the kind of diversity Mount Vernon has.”

She complimented the class of 2016 on their ability to persevere through tragic losses and difficult times. Belanger also quoted from her grandmother’s 1943 high school valedictorian speech, saying that an education is one of the most valuable and potent weapons one can develop in life.